The Socialist Party versus The Labour Party (1937) 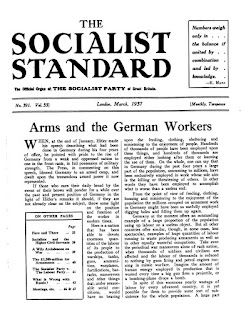 From the March 1937 issue of the Socialist Standard

Sir Stafford Cripps and his “Socialist League" have never been part of the Socialist movement in this country and, therefore, could not have been expelled by our Executive.

It was from the Labour Party that these people were expelled, and that organisation is no more Socialist than the old Radical-Liberal Party, whose political position the Labour Party inherited, extended and has largely practised throughout its history. In point of actual fact it is only within recent years that the Labour Party has taken to use the name of Socialism. For many years it openly repudiated any allegiance to Socialist principles. As recently as 1934 the National Executive of the Labour Party, in its report to the Annual Conference at Southport, said: —

It considers no useful purpose would be served in changing the name of the party to “The Socialist Party,” because an enormous amount of goodwill and propaganda had been built up round “The Labour Party,” and it has become honourably known to the electorate at large.

That statement is symptomatic of many things. If it were in reality a Socialist Party, why does it shirk the title? We suggest that those who really run the Labour Party know well enough that its past political history has been so much enmeshed in capitalist politics, upon which it has gained much of its support, that it has thus become “honourably known" as a party aiming at no fundamental change of the present form of society. As Socialists, we prefer that the Labour Party should not only refuse the title of Socialist but likewise should drop its false claim to be striving for Socialism. The rise of the Labour Party has been largely conditioned by its exploitation of the political and economic ignorance of the workers, as this in turn has expressed itself in the workers finding nothing fundamentally wrong in the capitalist form of society. Let us take a glance at the position. The condition of the working class, despite its traditional persuasion to the contrary, is that of a slave class. Its dependence under existing conditions upon the permission of the capitalist class for its livelihood is a fact. Class economic dependence means class subjection, no matter how much freedom may be apparent on the surface of the lives of those enslaved. It is a law of history that a class subjected must, if it is to win its emancipation, gain power, political power, from those who hold it in subjection, so as to build up a set of social conditions in harmony with its own interest. In other words, a dominant class simply does not run human society to suit the interests of those whom it dominates; to attempt to do so would result in its social suicide. But a ruling class does, because of its desire to retain its supremacy, placate its subject class with measures of “social amelioration." And this is one of the most potent forces for obscuring the basic cause of the class division. What is ambiguously styled as "the inertia of the human mind," when taken to mean the slowness of the human mind to move along lines of social change, is also one of the contributory causes of the persistence of class society. But how does the Labour Party, an organisation which claims to represent the interests of a slave class, respond to the facts of the situation? As indicated above, it finds, in the first place, a working class ready to “kick against the pricks” of class oppression. But instead of insisting upon a basic understanding of the root causes of class subjection and exploitation it proceeds upon the principle of dealing with the effects of the system instead of with its causes. Hence, instead of the workers being trained to think along lines of the abolition of the private property institution they centre their minds upon unemployment, low wages, high rents, war, bad housing, relief schemes, etc., all of which, no matter how they might be dealt with by the capitalist class, leave the source of working-class evils intact. Thus a valuable opportunity of exposing the foundations of the class division is lost and a consequent perpetuation of a “capitalist mentality" among the workers is maintained. The failure of the Labour Party to stress the class struggle feature of real working-class interest marks it off as an organisation unsuitable to the emancipation of the working class, and one which can only end in class collaboration and compromise. There is nothing like ignoring an elementary and basic principle as a means of distorting the real issues of the social problem—or any other problem for that matter. Thus does the Labour Party give us the key to its “mind" in the following pronouncement. Speaking of its appeal for support from all and sundry, the National Executive of the Labour Party has declared : —

Its call is to all men and women of goodwill and understanding to rally to its ranks as the one sure way of converting class antagonism into true community of spirit.—(Italics ours.)

This is after saying that "Labour's creed is based" not on any “narrow class appeal." Goodwill and understanding! Community of spirit! As though the problem were on a par with the mission of the Charity Organisation Society. The goodwill of the capitalists will never dissuade them from being capitalists however much they may be inclined to soften the effects of their exploitation of the workers. Whilst the "community of spirit" is something with which nearly all capitalists will agree and is, in fact, what they have always hankered after. It seems that it is entirely beyond the vision of the Labour Party to appreciate the science of class distinctions at all. Hence their entire outlook is vitiated by the illusion that they can build within the framework of capitalist society a state of affairs favourable to the workers. But the thing cannot be done. And we suggest that many a Labour leader knows this to be a fact, but other “reasons" compel them to “think" otherwise. For various reasons, personal and otherwise, they shirk not only the facts of the present situation but also the lessons of history. Yet, tragically enough, they are permitted to persist in this through the immature class understanding of those upon whose backs they have advanced to "social prominence."

Were it otherwise we would not have experienced the latest utterance of one of their leading lights, Mr. Ernest Bevin. Speaking at a luncheon (how these Labour blokes do like their luncheons) of the Foreign Press Association, Mr. Bevin said: “If there is a resort to war for dominance do not take the Labour movement too cheaply; we would defend our country. Labour wanted a planned world, but if that meant breaking up the British Commonwealth in a mad scramble of war amongst the nations they would oppose it. If, however, it meant a world movement with all the nations co-operating they would support it. As a means towards world stability raw materials should be socialised all over the world. They should be placed under public ownership and control and obtainable by all by purchase instead of conquest." (News Chronicle, February 5th, 1937.)

The vagaries and confusion of this statement would be hard to beat, apart from the fact that Mr. Bevin did not disclose his authority for partly pledging the Labour movement in the event of a war. But we take it that Mr. Bevin knows the supporters of the “Labour movement." Anyhow, what does the British Commonwealth mean to the working class except as a name to be worshipped? It doesn't belong to the workers but to the capitalists, whose sole interest in it is one of profit. We contend that if Mr. Bevin and his associates are so much concerned with the British Commonwealth (that word “Commonwealth" does make us laugh) then they should be compelled to face the guns of those who want to steal it. But we fancy that Labour leaders would be far removed from the danger zone. They are more likely to be found in the Government, as they were in the late European War. And what does Mr. Bevin mean by the raw materials being socialised, to be obtained by purchase? Does he know what he is talking about? Buying and selling is impossible under socialisation, for both imply the exchange of things which are privately owned. We can only presume that Mr. Bevin has in mind the State-ownership of things, each State buying and selling from the other. But that is totally different from socialisation, and is in reality nothing more than State capitalism. The workers employed in any State concern, such as the British Post Office, will fail to see the advantages of the so-called socialisation except to the capitalists. It is this theory which the Labour Party has spuriously called Socialism and which we have exposed time and again. Even supporters of capitalism have exposed the shallowness of the Labour Party’s "socialisation'’ and "public utility corporation" schemes. When the London Passenger Transport Act, which was introduced by a Labour Government, was passing through its final stages under the control of a Conservative Government, the Times (reputable organ of British capitalism) had to say of this so-called "Socialist" Act:—

The principal objections which have been raised may be grouped under three main heads—namely, that the Bill is a “Socialist” measure; that it creates a dangerous monopoly; and that it will raise the cost of transport. None of these criticisms will really bear very prolonged examination. It is true that the Bill in its original form was produced by a Socialist Government, and that the then Minister of Transport, Mr. Morrison, nearly succeeded in damning it for ever by claiming it as a triumph of Socialism. But where in fact does the Socialism come in? In what point of principle will the new transport undertaking differ from the Central Electricity Board or from Imperial Communications Company, both of which were created by a Conservative Government? Like them, indeed, it is a statutory monopoly, and therefore subject to a certain degree of public control; but it is privately, not publicly, owned.—(Italics ours.)

Thus, Lord Ashfield and his class can well enjoy the "public utility corporationism” of the Labour Party and well may they sigh with the Victorian statesmen who declared "we are all Socialists now." The workers have got to learn the distinction between the Labour Party and the Socialist Party if they are to be rid of the evils which afflict them. They have first to learn that they are the producers of the world's wealth and that this is in no way due to the so-called superior intelligence of their masters. Next that their position of poverty and insecurity of existence is due to capitalist control of the means of life. That this class can only be removed from power by the workers themselves gaining power and changing the system completely. This is no purely national affair but an international one comprising practically the whole world. Upon their own efforts must the workers rely for their emancipation from wage slavery. For "trust" in the Labour leader is but a substitute for trust in the capitalists, their Press and their priests. The Socialist Party urges the workers to think below the surface of things and they will find that many of the ideas they have are but based upon the mere appearance of conditions instead of upon their underlying causes. If they will do that they will see the barren nonsense of the Bevins, who talk of defending "our country" and preserving the "British .Commonwealth." The world can be theirs if they will it. Not the Labour Party but the Socialist Party points the way.
Robert Reynolds