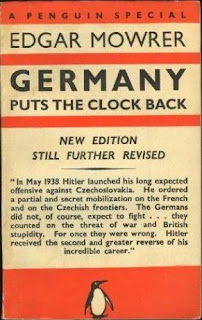 Book Review from the March 1938 issue of the Socialist Standard

These two books have much in common. Both are written by working journalists, both are easy to read, and both seek to provide a background to the events which they portray. Mowrer, in his “Germany Puts the Clock Back," paints a vivid picture of the social disintegration which eventually led to the triumph of Hitler and the National Socialist Workers' Party of Germany. In so doing he also partially provides an answer to a question so frequently asked of Socialists: “How is it that the German workers, with their numerically strong Social-Democratic and Communist Parties, their highly-organised and well-disciplined trade unions, fell so easy a prey to the Nazis?" The answer is to be sought in the political and economic background of German capitalism. German capitalism made its appearance at a relatively late stage, and a preponderant part was played by the State in its consolidation. The state bureaucracy, with its Prussian ideals of unquestioning obedience and strict discipline, early became a strong social force, and its outlook undoubtedly impressed itself on German society as a whole. Only personal experience can give an idea of the awe in which even the most insignficant “Staatsbeamte” (State official) was held. This reverence for “duly constituted authority” was no less reflected in the ranks of the German workers themselves. And the leadership of the German workers’ organisations could count on this tradition of blind obedience and discipline, no matter how contrary to working-class interests the actions of those leaders might be.

The upheaval of 1918, although largely the work of the working class, was not Socialist. It was the outcome of a widespread distrust of the monarchy and of the military clique, reinforced by an extreme war-weariness that affected civilians and troops alike. The Social-Democratic Party found itself the largest party in the Reich, and promptly proceeded to usher in the dawn of a new world by enlisting discredited generals and military adventurers to bloodily dispel any misguided notions entertained by radical sections of the working class. Having successfully accomplished this, the most democratic constitution in the world (on paper) was created, in the shape of the so-called “Weimar” Republic; a republic which entrusted its administration to officials who took no pains to conceal their contempt of the constitution they had sworn to serve. It is impossible to read the account of this sorry episode without forming the conclusion that the entire shabby, paltry edifice of this most “democratic” republic was designed to serve as a screen, behind which the old bureaucratic and militarist elements could rehabilitate themselves. Like many other observers of the German scene, Mowrer is misled by the preponderant part the military machine plays in German affairs, to the extent that he assigns it an independent role. That is, as if the German ruling class existed for the army, and not the other way about. Olden makes a similar mistake in his “Hitler the Pawn.” The army is an indispensable tool of German capitalism, and as such has received loving attention from politicians of all shades, from radical Social-Democrats to reactionary Nazis. But it still remains a tool, to be used when, where and how the ruling class of Germany thinks politic.

Expressed tentatively, it would appear that the later a particular national capitalism makes its appearance the more important is the part played by the State in making that appearance effective; the more important the State, the more outstanding the role of one of its organs: the armed forces. This would explain the prominent part played by the armed forces in such countries as Japan, Russia and Turkey.

Mowrer effectively disposes of the myth, broadcast by both the Communists and Hitler— but for different reasons—that Hitler saved Germany from Bolshevism, or, if the other version be preferred, that Hitler was the last desperate throw of a capitalist class faced with imminent social revolution. The truth of the matter is that German capitalism found itself in profound difficulties, and that the increasing misery of the masses, instead of manifesting itself in intelligent organisation for the purpose of abolishing the cause of that misery, found expression in sporadic strikes, street battles, and blind kicking against the effects of capitalism. Although this in itself did not constitute a threat to the capitalist system, yet it did interfere with smooth running of German economy. Hitler, leader of the largest single party in Germany, was entrusted with the task of “pacifying” the German proletariat; and, of course, he has more than fulfilled his promise. For the time being, political brawls, strikes, and social disturbances are a thing of the past in Germany. Hitler has created the profound peace of the graveyard, the peace of penal settlement. Notwithstanding, since Hitler, like his predecessors, is committed to administering capitalism, the causes that make for social unrest still exist, and not all the concentration camps or the terrorism can in the end suffice to prevent expression of that unrest. It is only to be hoped that the German workers have learned their lesson, and that the mistakes of 1918 will not be again repeated.

This book also provides an explanation of the ease with which the German reactionaries prevailed upon the German people to make such tremendous sacrifices—sacrifices which have subsequently been epitomised in the phrase “Guns instead of butter.” On all occasions the parties of “national resurgence” urged that the distress of the masses was due to the Versailles Treaty, to "Versailles Slavery.” The masses were told that their well-being could only be achieved when Germany was free (i.e., when the German capitalist class had regained its political and economic freedom of action). To this end sacrifices had to be made, so that the means of effecting this freedom, a strong army, could be built up. Consequently, the attention of the workers was largely diverted from the capitalist system to a quarrel between different national capitalist interests, and in this they were ably aided and abetted by social reformers of all kinds, from the late General Ludendorff’s Freedom Party to the Communist Party of Germany.

As far as the limitations of this book are concerned, Socialists hardly need to be made aware of them. The author bears all the hall-marks of a sentimental Liberal of the old school that persists in confusing State-intervention in social and economic affairs with Socialism. His solution of the problem of Fascism is a “renewal of the belief in universal(!) values—in international organisation, in collective security, in democracy and personal freedom.” Of an understanding that these “values” can only be realised when the international working class achieves its emancipation there is not the slightest inkling. And this can only be accomplished, not merely through belief, but through organisation under the banner of Socialism and the class-struggle. 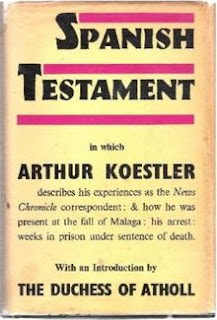 “Spanish Testament” was the December choice of the Left Book Club, and thus assured of a large public. The author was for a time imprisoned by the Franco forces in Spain, and part of the book is taken up by a description of his prison experiences. Like the preceding book, Koestler also provides a background to the events he seeks to portray, and the importance of the agrarian question is well brought out. The author more than once draws attention to the similarity between the present condition of Spain and that of Tsarist Russia. A mediaeval agrarian economy predominated in Russia, as it predominates in Spain to-day. The driving force in the former was a land-hungry peasantry, plus a weakly-established capitalist class striving to assert itself; the same driving force operates in the latter. One thing emerges quite clearly, all talk of a Socialist revolution in Spain at the moment, such as is indulged in by the P.O.U.M. and its brother party here, the I.L.P., is so much romantic Utopianism, which can only spell disaster to those sections of the Spanish working class that fall for it. The Communists here are proving for the time being much greater realists. Their aim is one within the realm of possibilities, the establishment of a Liberal, Democratic capitalist republic, with a constitution resembling in all essentials those prevailing in England and France. The Communist case against the P.O.U.M. and I.L.P., however, is considerably weakened if the conditions in present-day Spain and pre-revolutionary Russia are closely analogous, for in that case there is no more justification for the Communist characterisation of the Russian revolution as Socialist than there is for the I.L.P. claim that possibilities for Socialism exist in Spain to-day. In spite of a vicious campaign waged by the Communists against the I.L.P. and P.O.U.M. (in the case of the P.O.U.M. embracing such tactical niceties as political murder), the leadership of the I.L.P. still retains a pathetic belief in the Socialist “basis” of Soviet Russia, and is never tired of appealing to dear “Comrade” Stalin to mend his ways.

In dealing with the role of the Roman Catholic Church emphasis is laid on the nature of the opposition to that church in Republican Spain. This opposition is by no means the outcome of antagonism to religion as such, but is largely the result of the secular and political part played by the priesthood in the Spanish social system. Closely bound up as the Church is with those reactionary elements from which it derives its economic and social influence, it is hardly to be wondered that particularly this aspect of the “Holy Church” arouses almost fanatical hatred amongst Spaniards having the slightest pretensions to enlightenment. One need not be a prophet to predict that if the Church is to survive in the Spain of the future it will have to considerably adapt itself.

The account of the atrocities committed by the Franco forces, although sickening enough, are, on the whole, not treated sensationally. The author argues, where the mass of the population are opposed to you, terrorism becomes not solely an expression of individual sadism, but also, and chiefly, a political necessity. One thing seems certain, that without the aid given by foreign powers Franco would have been long since vanquished. In fact, it is more than doubtful whether he would have started his insurrection in the first place had he not been assured beforehand of military aid from outside sources. Although the author advances convincing proof of the existence of Italian and German support for the rebels, hardly any mention is made of the nature and extent of Russian aid to the Republican Government of Spain. The role of Russia in Spain seems clear enough. German and Italian domination in Spain would seriously diminish the value of France as a partner in the Franco-Soviet Pact. Consequently, it is in the interests of Soviet Russian foreign policy to see that the pro-German and Italian forces are defeated in Spain, whilst at the same time the movement is kept within bounds acceptable to Russia's present allies and to any probable allies of the future.

Like Hitler and Mussolini, Franco has appointed himself one of the co-saviours of the world from "Bolshevism." In spite of the frenzied declarations of political respectability on the part of the Communists, their murky past of the period of "heavy civil wars," "revolutionary upsurges," and all the rest of the pseudo-revolutionary tarradiddle is utilised by the reactionaries to justify the massacre of all working-class opposition.

That section of the book which deals with the personal experiences of Koestler make interesting reading, but need not be dealt with here. It only remains to remark that the Duchess of Atholl contributes the introduction.
Arthur Mertons