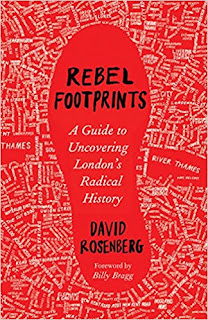 Book Review from the January 2017 issue of the Socialist Standard

Labour history, like all history, is seen through various lenses, distorting and magnifying certain aspects of reality, filtering out unwanted intrusions. Its resulting narratives reflect fundamental assumptions and serve to boost and consolidate those convictions. Here, David Rosenberg, presents us with a particular view of Radical London designed with a particular aim in mind. One which, since it already carries ‘likes’ from Corbyn and the TUC, ought to be pretty obvious.

Such it is not to the uncritical eye. For the best propaganda does not look like propaganda. Ostensibly, this book really does tell the story of ‘how defiant grassroots Londoners responded to their circumstances from the beginning of the 1830s until the end of the 1930s’ in relation to localities in which they occurred. Here, indeed, are the strikes, the campaigns, the events which any historian of the subject would be bound to include.

Already, however, our vision is limited time-wise. Why 1939? Did history magically end, Fukuyama style, with the invasion of Poland? Of course, this is not Year Zero at all. For the Left Labourite, the Golden Age began and history ended with the general election of July 1945. Hurrah for the use of troops to smash the dockers! Hurrah for the Indian massacres! Hurrah for the atom bomb! Go Clement go! And since that time, the Labour Party has been a most integral part of the political ruling class, so any account of strikes, campaigns, would inevitably be a Jeremiad (!) against that very Labour Party, which Rosenberg has come to praise. And not, like us, to bury.

What then, is the point of these campaigns, these strikes, that Rosenberg (to give him credit) accurately (bar a few niggles) and with an attractive liveliness (if with also butterfly flitting) describes? Whereto is the admirable sense of solidarity generated by the action of working together for a common cause directed? And how are the questions inevitably posed by such campaigns answered? Why, sir, need you ask! Instead of directing such justifiable anger, such togetherness, such criticism, against the system, the Labourite, consciously or unconsciously, co-opts these sentiments for their own ends.

And these are made clear: A change of political masters; Government charity – ‘free’ wigs, a council flat, and a nice job on the bins – for the worker; and a comfy seat on the board for ‘his’ rep. Apart from capitalism as normal, its wars, its poverty, its misery, this is all we can expect from the resurrection of Corbynite Old Labour. That this alternative to the Blairite New Labour holds any sort of appeal shows the depth to which we have sunk, propelled thence by the twin millstones of Leninist ‘Communism’ and Labour’s ‘Socialism’ – both in reality one and the same state capitalist nightmare.

As to the alternative, the world turned upside down, the lowly made high and the masters downtrodden, of this, to which a good half of those name-dropped herein subscribed, nominally or genuinely, there is no mention. We, and those like us, do not want ‘justice and equality’, our path is not mere protest, defensive and backward looking, but the revolutionary road to the world made anew.