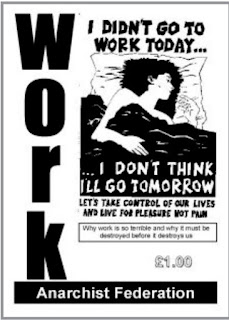 Pamphlet Review from the May 2006 issue of the Socialist Standard

It might be thought that a pamphlet on work would begin by setting out what is going to be meant by the word. But this pamphlet does not do so. Instead, it uses the word in two different, even contradictory, senses. Work “must be destroyed before it destroys us”, proclaims the front cover. “Work is a disease” says an illustration. “Arguments against work” is one chapter heading.

In physics work is the expenditure of energy. For humans, it is the exercise of a person’s physical and material energies to produce something that has some use, an unavoidable feature of human existence which has to take place in all societies and so cannot be abolished or destroyed. Under capitalism most work takes the form of employment, which is the things the pamphlets says: boring, meaningless, done for the benefit of an employer. It is employment – working for wages – , not work as such, that is a “disease” that can be abolished. What is required is the transformation of work, not its impossible abolition.

The authors of Work make some strong and valid criticisms of the human consequences of capitalist employment. For many workers it means physical and nervous exhaustion, illness, often anti-social laws, damaged family relationships, the intensification and lengthening of the working week, job insecurity, the switch from long-term employment to sub-contracting and self-employment, usually with worse pay and conditions. Even the unemployed, they say, are now engaged in the “work” of “looking for work”.

We agree that in “a society without ‘employment’, without bosses and wage labour”, the work of producing what society needs will be quite different: it will be “freely chosen”, “not measured at all” and an “expression of a person’s pleasure in what they are doing”.

Where we disagree is over how the Anarchist Federation envisage such a society coming into being – by a general refusal to work:

“We will take our hands from the plough and the loom, rise up from our desks, cast off our boots and overalls, walk out of the hotels and restaurants, leave the factory and office, meeting with others to join in their refusal to work as they celebrate ours”.

This is a recipe for disaster. If (as this scenario assumes) people had reached the stage of wanting to abolish capitalism and its employment and wage labour, then a more sensible option would surely be to organise, not to stop working, i.e. to stop producing with all the consequences this would have on social life, but to keep production going under worker control while the transfer through political action of social control from the capitalist class to the community as a whole takes place.
Adam Buick
Posted by Imposs1904 at 5:34 AM