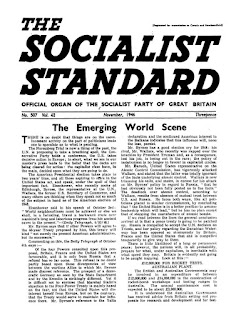 From the November 1946 issue of the Socialist Standard

The seaside town of Blackpool, noted for its amusements and fun fairs, seemed a most appropriate choice for the Tories to spend three days there indulging in ye ancient English political pastime of setting up “Aunt Sallies” and knocking ’em down. To say that they excelled themselves on this occasion is to talk in superlatives. We need hardly remind our readers that now, as always, the Aunt Sally was— Socialism.

Reading their speeches on this subject, it seems hardly possible—to paraphrase Mr. Churchill—that so many could talk for so long on a theme and yet know so little, for it is no exaggeration to say that even to-day the average Tory knows slightly less about Socialism than a red-herring knows about white port.

The conventional theme that Socialism was a kind of vast “Somerset House” presided over by a tyranny of officials, and for whom men’s lives existed merely as the data for an impersonal and inhuman system of labelling, ticketing, docketing, classifying and pigeon-holing, was plugged for all it was worth. They blandly ignored the fact that we became a community of form-fillers and subject to a thousand and one petty restrictions that hamper and perplex our lives largely under their political aegis. They forget, or do not care to remember, that even before the war they sought to regiment and conscript the working class. That it was they who were largely responsible for inaugurating the “era” of the identity card and with it the right to be interrogated and apprehended by the authorities. When faced with this glaring inconsistency between utterance and action, they will plead that much of the repressive legislation and coercive bureaucracy fathered by them is largely due to the temporary and abnormal conditions of war. This is, of course, both dishonest and specious, as it implies that in some way war is a mere aberration from the norm of Capitalism. War, of course, is not a mere temporary and abnormal phase of Capitalism any more than the passing fits of an epileptic are a deviation from an otherwise healthy state. War and its associated symptoms of repression and coercion are, then, permanent and normal features arising out of, and inseparable from, the morbid cause that produces them. Thus, with the further development of Capitalist society, the greater must the threat of more violent convulsion become, and consequently the greater must grow its accompanying social restraint.

The morbidity of Capitalism arises from the fact that it is a system based on the exploitation of the many, the propertyless working class, by the capitalist class, the owners of the means for producing wealth. Only part of the wealth produced by the workers goes to them in the form of wages; the rest is appropriated by the capitalists in the form of surplus value. It is this unpaid labour of the workers—surplus value— produced on a greater and greater scale as the result of their ever-increasing exploitation, that makes possible the continuous expansion of capital. This is the law of capitalist accumulation. Thus small capitals become large ones and in the competition between them weaker units are forced out of existence or absorbed by the stronger ones and wealth tends to concentrate into fewer and fewer hands. But competition is not eliminated by the monopolistic tendencies of capitalism; it is merely transferred to a higher and intenser level by the gigantic capital formations of the various “nationals” fighting for domination in a world market. That is why the State, as the regulating authority of the capitalist class must become a more and more active partner in the economic life of the national capitalist economy, and by its exercise of political control seek to unify its various elements into as strong an economic entity as possible in order to compete with other capitalist nations on equal terms. The political form which Capitalism takes is, then, not a result of the political programmes of its parties, but a consequence of its economic development. It is, then, the rigorous pattern of political uniformity which modern capitalism imposes upon those who seek to administer it that explains why the famous continuity of policy, whether domestic or foreign, between the Tory Party and the Labourites follows as a matter of course. The main task of alternative governments is, then, to supplement, and extend what the last government began.

In the light of the foregoing, Mr. Amery’s warning of a possible head-on collision between “Totalitarian Russia and the out-of-date economic laissez-faire of the U.S.A.,” and his advocacy at Blackpool of “the building up of stable groups of nations each with its own policy and defensive organisation” (italics ours), falls into proper perspective. That is why again the usual Churchillian rodomontade nevertheless contained the carefully qualified proposition that the Tories supported as a general rule free enterprise as against nationalisation. This “general rule” will thus permit ample accommodation for particular industries and services to come under State control or whatever form of supervision is favoured by them. The same can be said of Mr. Eden, who, after avowing the Labour Party were socialist, went into the confession box and recanted by declaring both parties believed in Capitalism, only the Labour Party wanted it in a State form while his party wanted it in the widest measure of individual Capitalism. No total rejection of State Capitalism, only the widest possible measure of individual Capitalism. But as Einstein has taught us, width is not an absolute quantity, and Mr. Eden's “wideness” will be relative to the requirements of Capitalism in space and time. If and when the circumstances arise, a future Tory government will be as active an agent in the life of Capitalism as any Labour administration.

Ironically enough, although the Tories, in looking into the mirror of the future, pretend to look through a glass, darkly, they see in the very development of their own society the distorted reflection of something else—Socialism. Thus the outcome of Capitalism in its maturest form, with all its crass social consequences, becomes the bureaucratic nightmare of Socialist society, and it is with this bad dream that they seek to haunt the political sleep of the working class. They are, of course, helped in this by the Labour Party, who hold that the final form of Capitalist evolution is its opposite — Socialism. The Labour Party has owed its rise to the fact that it posed as a real alternative to the older Capitalist forces, Tory and Liberal. Having no real solution to Capitalism, i.e., its replacement by a system of common ownership of the means of living, and yet compelled to criticise Capitalism's shortcomings, it had to idealise its future as a new social system and see in the very developmental forces of present society nothing less than the realisation of “Labour’s ideal.” In this way were they able to turn an economic necessity into a political virtue. This utterly erroneous conception of Socialism is, nevertheless, indispensable to both parties because it provides them with an ideological basis for political rivalry.

Nevertheless, the ideological basis seemed unable to support the weight of a detailed Tory policy which might be capable of being offered as an Election alternative, for in spite of the demand from the body of the conference for a plain statement of policy, the big boys on the platform were unable to oblige. In fact, Sir Herbert Williams, replying, said "you don’t state a policy, it grows out of circumstances.” The real thing, he added, is to go for your opponent bald-headed and gradually build up your policy from that. Later Captain Crookshank promised that this talk about policy would reach the leader’s ears before night fell, which meant, presumably, Mr. Churchill was bringing something along.

So that those who run may read, we merely comment by saying that Mr. Churchill’s Conservative objectives — support of Church, King, Parliamentary institutions, law and order, efficient fighting services, a sound financial policy, and social betterment of the people—were as modern a statement of Tory principles as any put forward by Peel or Palmerston. Mr. Churchill, who doesn’t really like to be out of office— or out of anything, come to that—was a little cross with the Labour Party for refusing to stay on with him. As he said, there was general agreement, more or less, on foreign policy, and also on a vast amount of social legislation, and both were united against Communism (he meant Russia, of course). It seemed, no doubt, a waste of time to him for them both to be scrapping.

Mr. Churchill also expressed himself in favour of a property-owning community, an ideal much in favour, of course, with those "democratic” owners of the "democratic” means of living, the Capitalist class. But as the "democratic” Conservative Daily Telegraph awkwardly admitted, "Socialism did not originate out of the void, but out of the discontent of the masses in a world in which the relatively propertyless wage earner found little satisfaction.” And as it appears from Mr. Eden that the Tories were opposed to "soaking the rich” or any redistribution of wealth, Mr. Churchill had to find some means by which the propertyless wage earner could be elevated into the ranks of his property-owning community. It is, perhaps, symptomatic of his passion for the past that he should discover it in the proposal first put forward in the 19th century by a Liberal economist, John Stuart Mill—co-partnership or profit sharing. But, as we have seen, profits arise as the result of working class exploitation by the property-owning Capitalists. Mr. Churchill thus wants to spread the notion that the workers have an interest in their own exploitation. Apart from this such schemes are essentially reactionary and dangerous to working-class interests because such ‘‘profits,” being merely an extension of a form of wages, nevertheless foster the illusion that the workers have a stake in that shadowy and illusory conception called the prosperity of the firm. Moreover, in a highly competitive capitalist world, where the cutting of costs, including wages, is of prime importance, such schemes are not suitable for the capitalists as a whole as a means of achieving this as efficiently as the rapid alternation of market conditions require. Finally, while Capitalism remains, the capitalist class will never yield their economic privilege of appropriating the unpaid labour of the workers either through profit-sharing or any other schemes.

While it has been said that the conference revealed differences in the Tory ranks, nevertheless they stood four square and united for the maintenance of the Status Quo. Undoubtedly, for those who choose their parents with such discernment as do the Tories, such a sentiment as “What was a good enough social system for my father is also good enough for me ” is understandable.

Perhaps in some Elysian field or “Happy Hunting Ground” where successful politicians go when they depart from this world, the “Shades” of Disraeli— founder of the modern Conservative Party—might have strained a ghostly ear to catch the words that fell from the lips of the Conservative speakers, and with a fleeting smile ruminated on the fact that nothing has really changed in essentials since he wrote of the rich and poor living in the same society, constituting, as he said, “Two separate nations.”
Ted Wilmott
Posted by Imposs1904 at 10:04 AM