Of Memories and Managing Directors (1947) 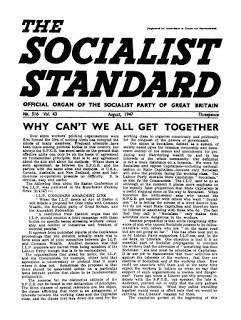 From the August 1947 issue of the Socialist Standard

In a recent edition of the house magazine, the managing director of a multiple store stated, "The memory of those who gave their lives for their country will abide with us.” We are familiar with these earnest promises to keep faith with those workers who died in senseless wars waged against the workers of other lands. Stone manifestations of these utterances stand in every village and town up and down the country, surmounted by the symbol of a rather elastically interpreted religion.

The dead present little or no problem in our modern capitalist society. Their dependants are doled out with a pittance, their names are mentioned with less and less frequency; and so they die their second death. It is the survivors who constitute the problem to the capitalists, who are, one presumes, sufficiently grateful to take back their ex-warrior employees for the period the reinstatement right covers (it is true there are cunningly concealed loopholes available to these employers which they use whenever urgently necessary).

But more and more of our stalwart men are finding that, far from a situation arising where they can say, "Well, we’ve done our bit, the war’s won, now we can settle down to make progress in our chosen careers,” business concerns have no use for men who inadvertently wasted six or seven years at a time when they would have been increasing their knowledge and experience. Too old to be trained anew, out they go. On applying to other firms for employment, they get the same answer—too old; too old in their late 20’e or early 30’s! Becoming bitter, they blame the individual firms, the Labour Government, anyone, in fact but the only cause of their troubles—CAPITALISM.  It is capitalism which dictates that a worker should only be employed in a job and at a wage which leaves a surplus value for the employer.

Workers! Whilst you accept capitalism as the system of economic life you will always be too old or too young for the job. You will at intervals be rushed off to serve “your” country by destroying your comrades of other nations who are being urged with identical slogans to destroy you. You will always return to find that the fine promises were tongue-in-cheek ones which your bosses do not intend to implement.

The breathing-space between the rounds in the fight for world markets grows shorter. Stir yourselves now, or soon you too will be “abiding” in the memory of some managing director.

I guess 'G.' could be Clifford Groves but I can't be sure.