Canals and the Growth of Industry (1960) 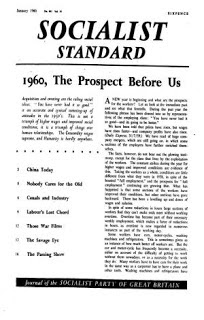 From the January 1960 issue of the Socialist Standard

Across the face of England, a familiar feature of the landscape, run those half-forgotten waterways, the canals. Like the railways that superseded them, and which often followed their routes, they link the vast industrial areas of the North and the Midlands with London and the seaports. They cross the lines of hills that divide river from river to make a highway from coast to coast. For many miles they are derelict and abandoned. the subject of indignant letters to the press. Weed-choked and in some cases dry, they link small towns and villages that were once centres of industry and commerce. Only between the big cities and the ports are they still busy. But even here, with their slow-moving boats and their quaint hump-backed bridges, they suggest to most people a quieter and less hectic age.

It is difficult to associate them with speed. Difficult to realise that they were once the most modern of highways. Yet for half a century the canal packet-boats were the fastest means of transport at the service of the public. Fatal accidents in the cause of speed were once quite common.

The canals were the transport system that helped to make possible the Industrial Revolution, which was under way by the middle of the 18th century. At that time the new industrial centres of the North and the Midlands were expanding fast. Liverpool, Manchester, and many other towns grew apace as the older industrial areas declined. London, Cobbett’s “Great Wen," sprawled increasingly over the market-gardens that surrounded it. The need for food to feed the growing populations, and the increased profits to be obtained from its production, resulted in new methods of farming. These methods were to be as far-reaching in their effects as the steam engine.

While water-power was still the main source of power, the infant steam-engine had arrived and needed coal. The expanding towns called out for fuel, building materials, and the manufactured goods that poured from the new factories. The factories needed raw materials, ores, timber, and a host of other things. Equally important they needed carriage for their commodities to the ports and to the markets at home.

But the roads, few and far between, were in an intolerable condition, while vast areas were covered only by tracks and bridle-ways. Inadequate for centuries, they had finally broken under the weight of heavy traffic. Difficult in summer, they were almost impassable in winter. Responsibility for their upkeep rested on parish councils and local landowners, who took a parochial view of the problem. The fact that wool, England's main export for medieval times, lent itself to carriage by pack-horse had not provided an incentive to improvement. The principal means of transport was still the pack-horse train.

From Manchester to Liverpool, a distance of only 35 miles, the journey took a whole day, from London to York a week, and from London to Edinburgh 12 days.

These conditions made transport slow, difficult and dangerous: and what was more important to the Capitalist — expensive.

Josiah Wedgwood
An enthusiastic advocate of canals was Josiah Wedgwood. Creative artist and super-salesman, Wedgwood had set up his new Etruria works near Burslem in Staffordshire. Let us glance at the problems confronting him.

The high grade pottery produced at Etruria called for china clay from Cornwall and Devon, flint from Kent and Sussex, and coal. Most important, safe and smooth transport was needed for the fragile products of Etruria. Clay was pack-horsed to Bristol, carried by ship to Liverpool, and from Liverpool transported by broad-wheeled carts along the turnpike road at a rate of two miles an hour. Flint was shipped from the ports of the South-East to Hull, carried by boat on the navigable Rivet Trent to Burton, and once again by pack-horse. Coal and lead came in by the same ancient method. One possible answer to the problem of transport was the turnpike road. But the turnpike roads were few and far between, and crudely constructed. Most of them had restrictions on heavy traffic, and insisted on broad wheels for carts. The “modern” roads of Macadam and Telford, with their fast coaches, were half a century away.

An alternative means of transport was the navigable river, which had been used from ancient times. For 150 years constant improvements had been carried out on them, but river transport had serious limitations. Currents, tides, shallows, low water in summer, and flood in winter, all hampered progress and added to the expense of transport. Mill owners and possessors of fishing rights placed weirs across rivers, which obstructed the passage of barges and caused delays. But, most important of all, rivers do not cross mountain chains or climb high ground; and Britain, being an island, has no river crossing from one side to another.

What was needed was a transport system that was free from these obstructions, and free from administrative muddle, above all, a system that would overcome natural barriers. The rivers could not supply this need, but the experience gained in their improvement and development pointed to the answer—a tideless highway, the canals.

The way of the pioneer is ever hard and the way of the canal pioneer was no exception. The Duke of Bridgewater, a wealthy landowner, who had travelled on the Continent and seen the achievements of French and Italian canal builders, was the owner of coal-mines at Warley near Manchester. He wanted a cheap and easy method of bringing coal to his nearest market, Manchester, and he decided that a canal was the answer. He secured the services of James Brindley, a millwright and an experimentalist with steam engines. Brindley, semi-literate, but with unusual ability, was to canal construction what Stevenson and Brunel were to the later railways. Work began on this project in 1759, and two years later the first coal boat sailed into Manchester. The price of coal dropped immediately from 7d. a hundredweight to 3½d. A second project to extend the canal to Liverpool began and the “Canal Age” had arrived.

Canal Mania
Before this second canal was finished a much more ambitious scheme began, the Grand Trunk Canal. Moving South from Manchester, this was to become the main trunk from which the branches were to cover the country.

When the first canal was begun capital was hard to obtain; and to finance his second—the Manchester-Liverpool canal—Bridgewater had to mortgage his first. But as the canals slowly advanced interest in them grew, and a wave of speculation culminated in the “Canal Mania ” at the end of the century, when unsound schemes, many of them doomed from the start, were given eager backing.

The construction of canals presented great problems, and the lessons learned in solving them were invaluable to the later railway and road builders. Reservoirs were needed to supply the canals with water and bridges, locks, aquaducts and extensive tunnels were made to carry the canals.

As the canal advanced, its impact on the country through which it passed was immense. Often 2,000 workers would be employed in an area, and the problem of supply was vast. These “Inland Navigators” or navvies, as they became known, were usually rough characters. and disrupted the settled life of the towns and villages in the path of the canal. When they had passed on, the silent highway that they had created had changed the country beyond recognition. Villages once isolated were now on the main highway, and grew as industry followed in its wake. New canal towns, like Stourport came into being whilst old river ports sank into obscurity.

The packet boats
Although the prime need was the transport of heavy goods, passenger transport and delivery of packages became an important part of the canal trade. The packet boats, the “expresses of the canals,” were specially constructed to enable them to travel fast on a narrow canal. They were pulled by two horses ridden by a postillion, the horses being changed at 4 to 6 miles intervals. They kept up an average speed of 8 to 10 miles an hour for many hours, had 1st and 2nd class cabins, and ran to a strict timetable. Some were heated by hot-water pipes. The packet boat had the right of passage, and all other craft had to give way. It was dangerous not to, for they tore along with complete disregard of any other traffic on the canal. One of the most famous, the “Duchess Countess,” mounted a curved knife on the bows to sever the tow rope of anything not giving way.

The decline of the canals began in the 1830's, when competition from the railways began to make itself felt. The faster and more comfortable trains rapidly drew passenger traffic away from the canals: and the packet boat, like the stage coach, disappeared in a decade. The application of steam to shipping made coastal travel quicker and safer, and this finished canals, which had been specially constructed to reduce sea travel. The decline was hastened by the canal companies themselves. For half a century they had held a monopoly, and had exploited their position in a manner common to monopolists. Like the River Navigation Boards before them, and the railway companies after, they failed to take action that could have postponed their decline.

Nothing illustrates better the headlong rush forward of Capitalism than the story of the canals. Beginning in the mid 18th century—ultra modern and with far-reaching effect—within a lifetime they were obsolete.