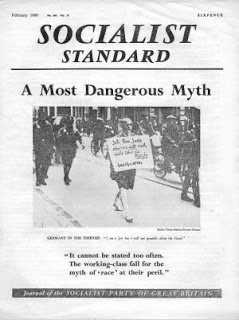 From the February 1960 issue of the Socialist Standard

Short as was the hey-day of canal transport the supremacy of the “flying coaches” was even shorter, From about 1810 to the late 1830’s. The Golden Age of coaching lasted a mere generation but it has held the popular imagination for over a century.

Unlike their floating counterparts—the canal packet-boats that have been forgotten—the stage coaches are a familiar feature to people who were born long after their disappearance. They have a romantic appeal that was fostered by Victorian writers who looked back to them with nostalgia once the noisy, smoky locomotive had taken their place.

But there was nothing romantic about coach travel. It developed in an age of ruthless competition, in fact the first age of speed, when speed became important for its own sake. Men and horses were driven ruthlessly to keep to strict schedules and constant efforts were made to clip minutes off travelling times. The Comet on the London to Exeter run aimed to change horses at Hounslow near London in 30 seconds.

It was understandable, that after centuries of painfully slow travel, a smooth and swift transport system should appeal to people, but fantastic risks were taken that often resulted in accidents. Wealthy idiots would drive private carriages at break-neck speeds and would even bribe coach drivers to let them take the reins of the public coaches. But in spite of this it was still an efficient transport system that would have seemed impossible only a few years before. This system was made possible by the far reaching improvements in road construction and bridge building that had taken place at the end of the 18th and the beginning of the 19th centuries.

Medieval Roads
The hopeless state of the roads during the first half of the 18th century that had led to canal construction, led also to constant agitation for road improvement. One 18th century cartoon portrays a sailor with a wooden leg refusing an offer of a lift in a coach saying “No thanks I’m in a hurry.” But the problem was a complex one. Since the departure of the Romans 1300 years before no properly constructed roads had been built on any large scale. The Romans had built with great thoroughness, their roads often being five feet in depth and carried across swampy land on piles driven down to firm soil. After over a thousand years of neglect they were still the best roads in England in spite of having been robbed for stone.

The roads of Medieval Britain were, in short, little better than the farm tracks of today. Medieval man regarded a road as a right of way rather than a permanent highway. A person or vehicle had a right of passage “without let or hindrance” but no more. If the road was impassable a traveller had the right to pass along the edge of the road even through standing crops. Pack-horse trains on finding a track in a bad condition would tread out a new one alongside. In this way a number of parallel tracks would be formed, sometimes covering a hundred yards or more. This situation survives today in the public “rights of way” through the countryside where there is the right of passage from point to point but no obligation to provide, a surface to the path. Medieval man could manage with such an arrangement but a growing industrial country could not.

Turnpike Roads
By the 18th century, responsibility for the upkeep of the roads had been thrust on to the unwilling parishes. The parishes were responsible for all roads that passed through them and the work had to be done without payment. A surveyor had to be appointed for a year, to organise the work. This official was forced to accept the job and was unpaid. The inhabitants were forced to work without pay for a number of days a year and the parish had to supply all tools, materials and horses free of charge. Under these circumstances very little real work was done. At the same time the parishes were fiercely independent and resisted any attempt at a central control.

To meet this problem the Turnpike System came into being. Barriers were set up on the road and anyone passing through had to pay tolls which went to pay for the road’s upkeep. Turnpike trusts were set up to administer the system, the first Turnpike Act being passed in 1663. From the beginning there was bitter and violent opposition. The canals and the later railways were privately owned and after the necessary Act of Parliament had been obtained work could go on with little or no regard for anybody affected. But the roads were public and the idea of charging tolls for their use aroused tremendous resentment. Tollgates were destroyed, gate-keepers were attacked and sometimes murdered and their houses burned down. The Government retaliated by extending the death penalty for offences against the turnpikes. Although with the passage of time opposition died down, the system was never popular and riots would break out from time to time. This attitude was strengthened by the Turnpike trusts themselves. In the main they were corrupt and regarded the income from tolls as something to be milked, consequently road improvement was very slow. Not until late in the 18th century did the need for well-constructed and therefore expensive roads become generally accepted.


The canals had been constructed to carry heavy goods. It was to carry coal, not people that the first one had been constructed. After they were built their obvious advantages led to the development of passenger traffic. But the reasons for constructing good roads were many and various. Firstly military. The first good roads since the Roman occupation were built in the highlands of Scotland by the British army under General Wade when about 400 miles of roads were built. This was after the Jacobite rebellion of 1715 and the purpose was to subdue the highlands by making troop movements easy.

It was many years after this before good roads were constructed in other parts of the country. Other reasons were the growth of the postal system, the development of the Inland Spas and later the new seaside resorts where the wealthy landowner and the rising Capitalist class went to spend the wealth that they had wrung from the "dark Satanic mills.” There was also travel for commercial reasons, which grew as industry grew.

After the roads had been built their advantages for general transport became obvious. During the later part of the century first Metcalf, then Telford and McAdam, began a great construction programme that included not only roads but bridges, docks and harbours as well as improvements to canals. The political need for easy access to Ireland gave rise to one of the most important of schemes, the London to Holyhead road which included the famous suspension bridge over the dangerous Menai Straits.

The first mail coach ran from London to Bath in 1784 and the system rapidly spread. The mail coaches were the “aristocrats” of the road and travelled free of charge. Toll gates had to be opened immediately and there were heavy fines for delaying them. Their first duty was to deliver the mail but they also carried passengers. Their fierce rivals were the stage coaches, which were privately owned public transport coaches. First class passengers travelled inside, an second class on the roof, and to meet the competition of the Mail coaches constant efforts were made to improve speeds and general conditions. In addition, there were the faster and even more expensive Post coaches that carried inside passengers only. These were for people who objected to the rowdy second class passengers on the roof. The really wealthy travelled in private carriages. All of these coaches were expensive and the lumbering broad-wheeled stage-wagons carrying both passengers and freight catered for poorer people, but even these were beyond the reach of a vast number of people. Another feature of the roads were the flocks of animals and birds being driven into the towns for food.

Steam Carriages
In the early 19th century a new and revolutionary form of travel appeared—the steam carriage. These in the early stages were noisy and cumbersome and were regarded with suspicion but they were soon showing signs of being a serious rival to the horse-drawn coaches. Services both long-distance and within cities, began and unheard of speeds were reached. But the Turnpike trusts feared the damage that they would do to the roads and imposed crippling tolls on them—as much as £3 a time. This, together with legislation restricting them to a speed of 4 miles an hour, drove the steam carriages from the roads. By their action the Turnpike trust helped, to seal their own fate for the steam locomotive, transferred to rails, was to destroy them. During their lifetime the coaches built up a vast supporting industry. In addition to over 30,000 people employed by the coach companies themselves, there were the numerous inns to cater for the needs of the traveller, the tollgate keepers and a vast army of ostlers, and road-menders needed to keep the coaches on the road. There were also such supporting industries as coach-builders and harness makers, and all the lesser fry such as shoe blacks who managed to scrape a living serving the coaches. When the crash came it was complete for unlike the canals the coaches relied mainly on passenger transport and could not survive the competition from the very much faster trains. The distress and poverty that was caused to the unfortunate workers in the industry is vividly described by Dickens.

Some of the labour force was absorbed into the new railways but many sank into increased poverty as capitalism ruthlessly advanced, creating new industries as it destroyed the old.

By 1850 the roads were deserted and becoming grass grown and the once bustling inns which had milked passengers by outrageous charges struggled on as country pubs. Toll-gate keepers who had joined with the Turnpike Trusts in taking their cut from the tolls now sold sweets and repaired boots in their crumbling and neglected lodges. It was to be half a century before the roads once again became an important feature of transport.