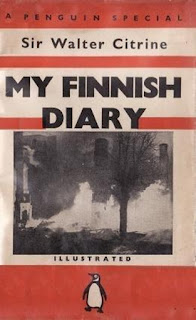 Book Review from the January 1945 issue of the Socialist Standard

At the Trade Union Congress recently held, a resolution was passed supporting the report of the Anglo-Soviet Trade Union Committee, which contained a clause singling cut the German people as being responsible for the war. No mention, appears to have been made of the responsibility of the peoples of other countries in this connection.

The report was presented to Congress by Sir Walter Citrine, and it is interesting and instructive to recall that this same gentleman published a small book, little more than four years ago, entitled “My Finnish Diary,” a Penguin Special, price 6d.

After describing the damage done by Russian bombers in Finland during the winter of 1939-40, Sir Walter observes on page 43: “I thought bitterly to myself,’ what a curious mentality it is which seeks to justify the wanton destruction of the homes of these .poor people, under the hypocritical guise of liberating them and opening up the vista of Soviet Socialism.' Socialism! It is a vile insult to associate the excesses of the imperialist Stalin and his coterie of despots with a word which has provided the inspiration and hope of millions of mankind.” Did Sir Walter hold the Russian people responsible? Turn to page 63: “It was awful to think that men could be hurled into slaughtering one another without having the least opportunity to control the governments who made the decision they had to obey.” The “responsibility” of the German workers for the war is on a par with that of the workers of other countries. Seeking relief from the pressure of their poverty, they supported the clamour of certain political groups for power, not realising the eventual outcome of their own act. Like the workers of other countries, they have already paid an appalling price for their political ignorance. The workers of this country returned a Conservative Government to power under the delusion that by so doing they were helping to keep the peace. Mr. Baldwin admitted later that he dared not let them know that he contemplated a programme of re-armament! Ironically enough, this same programme was instrumental in reducing the numbers of the unemployed, resembling in this respect the armament programmes of Russia and Germany; and, in spite of a lot of tall talk, not even Sir William Beveridge is able to show how to maintain “full employment” without armaments! But to return to the Trade Union Congress. 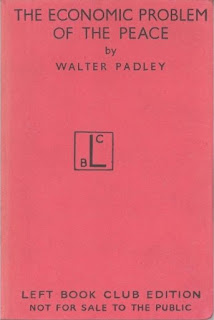 The reference back of the above mentioned clause was moved by Mr. Walter Padley, who has recently published a little volume—viz., “The Economic Problem of the Peace” (Gollancz, price 6s.). This has the merit of throwing considerable light on the historical and economic background of the present struggle for world supremacy. Mr. Padley squarely places the responsibility upon capitalism as a system, and in spite of various illusions of his concerning the nature of Socialism, does endeavour to show that Socialism is the only solution to the problem presented to his readers.

Most children of school-leaving age, who have paid any attention to their history books, know that Britain, in the course of its commercial struggle, has fought all the principal European powers in turn. Mr. Padley reminds us of the conflicts with Spain in Elizabeth’s time, with the Dutch in the time of Cromwell and Charles II., and finally with the French from the time of Queen Anne to the early nineteenth century. Control of Canada and India was wrested from the French in 1703 during the Seven Years War. In the course of this particular campaign Frederick the Great established Prussia as a power equal to any on the Continent. While British armies dealt with France in America and Asia, and the Navy followed suit upon the high seas, the German monarch of these islands gave useful help to Frederick both in money and in men. Having interests of his own to protect in Hanover, this is not surprising. So far from being regarded as the eternal enemies of mankind, Prussians were welcomed as convenient allies. The same thing occurred half a century later in the Napoleonic Wars. Blucher and the Prussians were in at the death with Wellington at Waterloo. Incidentally, in this final battle, Wellington’s army consisted mainly of foreigners, only 5 per cent, at most being British. This campaign settled for the time being the question which power was to dominate the world. The map of the world showed ever larger chunks of red as trade and the flag marched hand in hand.

Russia’s bid for .power in the Near East caused Britain and France to unite in the Crimean War in the middle of the nineteenth century, and it was not until a decade later that Prussia began to show political symptoms of the increasing industrial development of Germany. This is shown by Mr. Padley to have outstripped that of France by the close of the nineteenth century and to be threatening that of Great Britain. Lacking an overseas empire, Germany found scope for expansion on the European Continent. Sir J. M. Keynes (now Lord Keynes), in his “Economic Consequences of the Peace” (pp. 14-15), showed that “the statistics of the economic inter-dependence of Germany and her neighbours are overwhelming.” The present-day pleaders for the smashing-up of Germany as a preventive of war may as well advocate the destruction of Europe and be done with it.

These overgrown children, rotten with wealth, want all the advantages of capitalism and none of its disadvantages. They profess to believe in competition and squeal like rabbits whenever they meet a competitor capable of giving them a dose of their own medicine. Their invective, however, will probably know no bounds when their allies in this war follow in the footsteps of their allies in the last war.

The accumulation of capital in America seeking investment overseas reminds one of the words of Marx: “Face to face with the old queen of the seas rises, threatening and more; threatening, the young giant republic” (“Capital.” Vol. I., p. 735, Swan Sonnenschein edition.). In Mr. Padley’s opinion the future holds for Britain no brighter prospect than that of a junior partner to Uncle Sam in return for acting as policeman in Europe. Be that as it may, those who take the uproar against Germany seriously would do well to reflect upon Mr. Padley’s quotations from a couple of military historians. Major-General J. F. C. Fuller, who can hardly be suspected of anti-British tendencies, in his “War and Western Civilisation,” tells us that: “Between 1870 and 1900 Great Britain acquired 4,754,000 square miles of territory . . . between 1884 and 1900 France acquired 3,583,000 square miles . . . and in these same years Germany, a bad last, gained 1,026,220 square miles.” Captain de S. O. C. Stephens, in “A Century of War, 1815-1915,” tells us that in that period Britain waged 38 wars, lasting 64 years in all, while her peace-loving partner, France, spent 58 years in 17 wars. Russia occupied 28 years in 13 wars, while Germany, by some unaccountable oversight, only scraped up a total of 6 wars of 10 years' total duration.

“This, of course,” says Mr. Padley, “has nothing to do with innate vice. British or German, but arises from the later industrial development of Germany” (p. 116).

The present scribe cannot pretend to follow Mr. Padley in his speculations concerning his proposed “Socialist United States of Europe.” On page 106 Mr. Padley postulates that under a “Socialist economic system” a financial system will be necessary to secure the distribution of goods. He appears to have overlooked the fact that during the past five years millions of members of the working class have been fed, clothed and housed by their rulers' governments, after a rough and ready fashion, without cash payments on their part. It is up to Mr. Padley and those who share his views to let us know what are the obstacles which will prevent a Socialist administration providing for the wants of every man, woman and child without the aid of money. When the means of producing wealth are owned in common, the products will become a common store from which all may draw. This will involve organisation, not money, which is the outcome of lack of organisation in the sphere of distribution, resulting from private ownership

While Mr. Padley does not accept uncritically the view that Russia has established Socialism, he persists in asserting that state property and economic planning provide this particular nation-state with a “Socialistic economic basis” (page 133). This is playing with words. Can the close relationship between the State and industry in Russia be explained except by referring to the later development of industry there? No capitalist power on earth is able to administer capitalism along the lines of century old Manchesterian Liberalism.

Mr. Padley is also far too ready to regard Russia's attack upon Finland, Poland and the Baltic States as being simply a piece of military strategy. The restoration of the empire of Peter the Great cannot be dismissed in that lighthearted manner. Mr. Padley has gone to considerable pains to make it clear that nation-states express capitalist, needs. Military strategy is but a means to an end. Socialists are entitled to ask, “What has the recovery of the Russian nation-state to do with the emancipation of the international working class?"

Socialists have no blue prints to offer the world. Their task is to. mobilise the workers for the destruction of the system which robs them of the fruits of their labour. That is our only purpose in calling upon them to organise for the conquest of political power.