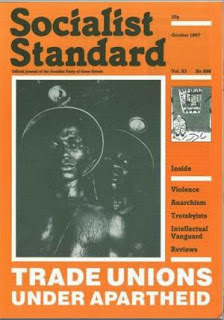 From the October 1987 issue of the Socialist Standard

Some phrases in the item Disenfranchising the Poor (Running Commentary, August 1987 Socialist Standard) may not have conveyed the socialist attitude on rates and taxes entirely clearly.

For example, we referred to every adult's "ability to pay" the proposed new local authority tax and stated the new tax will leave many people "substantially worse off," which may read as if socialists think the working class pay rates and taxes. That is, of course, the impression which most workers have but reality is different. Whatever effects the new tax may have on workers' incomes these will be only temporary and even at that, while some workers will "pay" more under the tax others will “pay" less.

The important point, however, is that whatever deductions or liabilities appear to be imposed on workers' incomes the wage they have available to support themselves and to reproduce their energies has to be determined by what is necessary to do that — by the value of their labour power. This fact is unaffected by what seems to be deductions for income tax or by liability to pay rates or any similar charges. The two main influences on workers' standards of living are whether capitalism is in a boom or a slump and the strength of their bargaining power to improve those standards.

The cost of the machinery of government, national and local, and till that implies, must therefore be borne by the capitalist class — paid from the surplus value extracted from working class exploitation. The capitalist class may legitimately concern themselves about the level and the administrative details of rates and taxes but these are of no concern to workers.

The introduction of the so-called poll tax may be motivated by the government hoping that it will persuade workers to vote Conservative in both national and local elections. The whole issue of rates and taxes is often used in this way because, like so many others, it is imperfectly understood by the workers. We hope the item in the August Socialist Standard in no way contributed to that confusion.
Editors
Posted by Imposs1904 at 9:29 PM