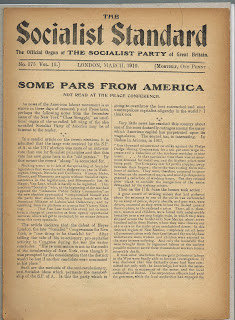 Editorial from the March 1919 issue of the Socialist Standard

The “beautiful new world” so often, promised the workers by their masters’ oily-tongued hacks when it was thought that possibly the under dogs might develop some sort of doubt as to whether the ugly old hell that capitalism had made of the world was really worth any wage slave’s while sacrificing his life for, is now emerging. The old world, in the torture of her child-birth, makes such horribly wry faces that one cannot help laughing. The railwaymen think that the New World should provide them with time to eat, and the Old World is sure that if the child is to have such an unheard of excrescence it can never survive the parturition. The miners think that the New World should be able to afford those who keep it warm and snug a couple of hours a day more sunlight, a modest two hours respite from the gas, dust, and danger of the pits, the accoucheur says he really doesn't think the beautiful New World he is ushering into existence can stand it.

Mr. Lloyd George, like the true capitalist lackey that he is, answers the miners' demands for more money and shorter hours, with a rigmarole of capitalist economics. He plays the old dodge of declaring that anything which is conceded to the producer must be paid for by the consumer. He affects to believe that between the wage of the producer and the price of the consumer there stands only a negligible quantity, a mere nothing. In the case of coal, he tells us, this mere nothing —profit—averages a shilling a ton, and of course, if he can induce his hearers to believe that it will prevent the suggestion that any increase of the pitmen’s wages or shortening of their hours might come out of the masters profits.

And as was to be expected, among all the so-called representatives of labour who heard him speak, there was not one sufficiently the master of Marxian economics to get up and tell the Premier that he lied when he said that more money for the coal-getters meant an additional burden on every industry. They accepted it. One of them even confirmed it by whining, when Lld. George claimed that the miners’ demands meant 10 per cent, on steel, "ten per cent, would not be very much." They accepted it with all its implications, which do not stop short of the conclusion that a general advance of wages would be no good to the workers because it would be counterbalanced by a general advance of prices.

No, it is not a struggle between producer and consumer, much as Lld. George desires to make it appear to be so. It is purely a struggle between the takers of wages and the takers of profits. The masters’ only way of recovering what they have to shell out in higher wages is to speed up either by improved organisation or adopting advanced machinery. They have got to get more coal per unit of labour or they have got to put up with a smaller rate of profit. It is just there where the shoe pinches.

The workers should study Marxian economics for themselves, they would then be proof against the yarn with which masters’ champions combat every demand for higher wages or shorter hours—that the consumer, and therefore the worker, will have to pay.
Posted by Imposs1904 at 10:59 PM