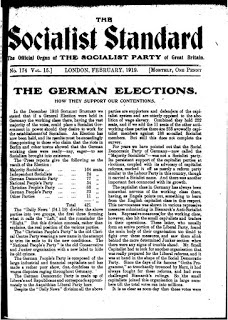 From the February 1919 issue of the Socialist Standard

How they support our contentions

In the December 1918 Socialist Standard we stated that if a General Election were held in Germany the working class there, having the vast majority of the votes, could place a Socialist Government in power should they desire to work for the establishment of Socialism. An Election has now been held, and its results must be exceedingly disappointing to those who claim that the riots in Berlin and other towns showed that the German working class were ready – nay, eager – to see Socialism brought into existence.

The Press reports give the following as the result of the Election:

The Daily News (24.1.19) divides the above parties into two groups, the first three forming what it calls the “Left”, and the remainder the “Right”. But this division conceals, rather than explains, the real position of the various parties.

The German People’s Party is composed of the large industrial and financial capitalists and has made a rather poor show, due, doubtless to the wages disputes raging throughout Germany.

The German Democratic Party is made up of Liberals and Republicans and corresponds approximately to the Asquithian Liberal Party here.

Despite the Daily News division all the above parties are supporters and defenders of the capitalist system and are utterly opposed to the abolition of wage slavery. Combined they hold 222 seats, and if we add the 11 seats of the other anti-working class parties there are 233 avowedly capitalist members against 188 so-called Socialist members. But still this does not complete the survey.

For years we have pointed out that the Social Democratic Party of Germany – now called the “Majority Socialists” – was not a Socialist party. Its persistent support of the capitalist parties at elections, coupled with its advocacy of capitalist reforms, marked it off as merely a reform party similar to the Labour Party in this country, though it carried a Socialist name. And there was another important fact connected with its growth.

The capitalist class in Germany has always been somewhat nervous of the working class there, having, as Engels points out, something to learn from the English capitalist class in this respect. This nervousness was shown in various repressive measures culminating in Bismarck’s Anti-Socialist laws. Repressive measures for the working class, however, also hit the small capitalists and traders in their operations. These latter, who usually form an active portion of the Liberal Party, found the main body of their organisation too timid to fight over these measures, and saw them slink behind the more determined Junker section when there were any signs of trouble ahead. Mr. Small Capitalist had to look for another organisation that was really prepared for the Liberal reforms, and it was at hand in the shape of the Social Democratic Party. Since the days of its famous “Gotha Programme”, so trenchantly trounced by Marx, it had even challenged Bismarck’s rulings. So the small capitalists joined this organisation in large numbers till the total votes ran into millions.

It is clear as noon-day that these votes were neither Socialist nor intended to help forward the cause of Socialism. The “acid test” came with the war. Then, as the Labour Party and Hyndman section here, the German Social Democratic Party supported this capitalist war on their side. Only a small number of the Left wing protested, and Karl Liebknecht was slimed with the praise of the capitalist Press of this country, which, since the signing of the Armistice, have used the foulest language at their command to blacken him in the eyes of the workers. Then came the split and the formation of the “Independent Socialist Party” by the Left wing referred to above.

With the fall of the Kaiser on the signing of the Armistice the Junkers went temporarily under a cloud, and the various sections of the Liberals joined with the Social Democrats to carry on in the interval.

Karl Liebknecht’s attempt to rouse the workers to seize power for themselves as a class met with considerable opposition even in his own stronghold, Berlin. This showed how small was the number of the German working class who were ready to assist in establishing Socialism. The number who understand it must, of course, be smaller still.

The German Election has shown, with the cold, relentless logic of figures, how much Socialist propaganda still must be done in Germany, as elsewhere, before the working class will be in a fit state, and ready, to establish Socialism.

While the old Clerical Party and the Junkers have tried to hide their disreputable pasts under new labels, the Liberals have come out with a party of their own: the German Democratic Party. In spite of this many Liberals have been reassured by the actions of the “Majority Socialists” during the interval, and have maintained their allegiance with them. Hence the “Majority Socialist” vote cannot be claimed to be more than a mixture of advanced Radical and ordinary Labour votes.

Due to their action in opposing the later war-credits the “Independent Socialist” vote is a much more reliable index to the number of Socialists in Germany. Even here, however, the breaking away of the Spartacus group adds to the difficulty of forming a sound judgement till more detailed information is available. Until then even the most optimistic who have any acquaintance with German conditions, cannot claim more than the 24 “Independent Socialist” members as an expression of the desire for Socialism on the part of the working class in Germany.

There, as in all capitalist countries, the fight for the Social Revolution has yet to take place.

That's the February 1919 issue of the Socialist Standard done and dusted.