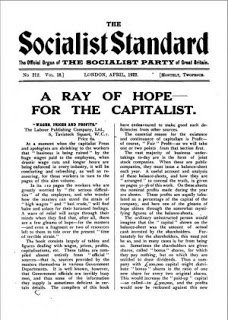 From the April 1922 issue of the Socialist Standard

''Yes! but shall we ever see Socialism in our time?" This is the finish of many a long discussion, when difficulty after difficulty has been met, when conviction is in escapable, the other chap wraps the diminished shreds of his prejudices about him, and says, sceptically : "Do you think we shall live to see it ?" A simple, laconic "Yes" will obviously fail to carry conviction. He wants some details. He wants some reasons for the faith that is in us, and prosaically, perhaps, he wants to know if he will be there when the prizes are distributed. We beg to say, therefore, that unless Fate has marked us down for an early call, in our belief, Socialism is within measurable distance. These are our reasons.

First, let us have some definitions. The system of society with which we are familiar is called Capitalism. Its essential feature is the social tool, or machine, with which great numbers of human beings co-operate to produce that which humanity needs. These tools, or machines, are the property of a comparatively small number of individuals, who, by virtue of such ownership, take the whole of the product, returning to the labourers, on the average, just sufficient of the proceeds to enable them to support life and continue to work. The wealth produced to-day is produced for the market. When the home markets are filled up, the capitalist looks abroad for markets for the surplus.

It becomes, therefore, the anxious concern of those who own the social machinery —the capitalists—to obtain markets, for this surplus. This is done by the partial interchange of products between capitalist countries in varying stages of development, by conquest and colonisation, and by the encouragement, often forcible, of non-capitalist nations to become customers for their goods.

Now, obviously, the continuity of a capitalist concern depends upon its ability to obtain and hold markets. Without markets it dwindles and dies. And, like a highly developed living organism, there is no standing still. It is either going for ward of back. If it goes forward, it carries its own Nemesis with it; for among the products it must export are the very machines that will in turn make the market first self-supporting, and later into a competitor. If it go back, it automatically condemns to idleness, starvation, and possible insurrection the source of its own riches, the workers, without whom the whole of its machinery is so much scrap-iron.

It remains, then, but to consider how far Capitalism has travelled along that fatal road when its effective markets (not necessarily its possible markets) are saturated, and it stagnates for very surfeit. Here is where our questioner comes in, not too bored, let us hope, to follow but a little further, and not too exacting to ask us the precise date. One can only give indications and make rough approximations. Consider these facts. During the last ten years probably a hundred millions of people have died as a result of war, famine, and pestilence (influenza). Add to these the millions of unemployed in every capitalistic country. Think of the loss in productive capacity of those millions. Think of the loss as consumers. And yet, according to Chiozza Money, "our exports in January, commonly alleged to be desperately low, were as great in quantity as in 1900, a record year of boom trade thought remarkable not long before the war." ("New Statesman," February 25th.) He also mentions that in the two years 1919-1920 new capital issues amounted to £691,000,000.

We are told this is a period of bad trade, of depression, of decreased productivity, of poverty-stricken markets. What will it mean when Capitalism gets going again; when trade revives; when France is "restored" and Germany gets on her feet; when India, China, Japan, and possibly Egypt come into the ring ? C. E. Turner pointed out recently that one industry at least that is doing phenomenally well is that engaged in manufacturing textile machinery. Not for Lancashire. It is being shipped to France (for restoration), India, China, and Japan as fast as it can be produced. This is but an indication. What is the only possible inference from all these considerations? What other than that the present slump will be succeeded by a brief period of feverish bustle of prodigious production, of tremendous effort, and then— and then, what ? Markets choked, production stopped, unemployment colossal, and slump abysmal.

These things will gradually awake the worker to a knowledge of his position. As the water wears the stone away, so the disappointments and sufferings will eventually wear away the workers' support of capitalism. In our opinion, human society is ripe for Socialisation now, immediately. It wants but a working class ready, willing, and, above all, organised, to take the means of human life out of the hands of those who now use them for individual gain and convert them into instruments for the common well-being. The opportunity arises at each General Election ; for, as the capitalists conserve their power by their hold on the machinery of government, so, with the accession to power of a majority of workers' delegates, backed by an organised working class, can the people achieve that social ownership of its own means of life, which we call Socialism. This can be achieved in our time. This is within the compass of the present year. There is no need to await the brutal bludgeoning of the next slump, or the one after that. The first requisite is understanding; the next organisation; and then a realisation that they are best combined by joining the Socialist Party—now.
W. T. Hopley
Posted by Imposs1904 at 7:41 AM

You have to admire Hopley's optimism.