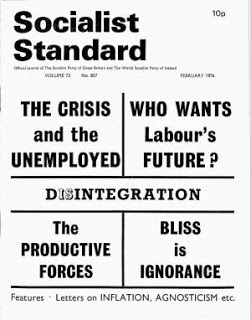 The Socialist Party of Great Britain has never shared the euphoria of the Left for so-called welfare legislation. All the starry-eyed illusions that were let loose in those post-war years, about what a wonderful thing the Welfare State and the National Health Service would be, served the capitalist class well.

The reformists could not come up empty-handed after six years of war. The delusion was carefully fostered of making a start to build a bright and happy future. High hopes were encouraged that nationalization of basic industries would mean that things like coal-mines and transport ran as a public service, with profit considerations pushed aside.

The welfare state, with the National Health Service at the heart of it, was to be the show-piece and crowning glory of it all.

In the war days of the Beveridge Report, had not Quintin Hogg remarked:


Some of my hon. Friends seem to overlook one or two ultimate facts about social reform. The first is that if you do not give the people social reform, they are going to give you social revolution.

Had not all the war propaganda dangled the prospect of a better life when it was all over? The free provisions of free specs and dentures did not last long. Workers soon had to start paying half, on top of ever rising compulsory contributions. The economics of capitalism soon reminded the reform-mongers that things (under capitalism) have to be paid for. All along the line, in every nationalized industry, (and not least in the NHS) the chickens have come home to roost.

A generation of workers have placed their trust and wasted their lives on the pie-crust promises of ambitious politicians. More than thirty years have passed since the Labour Party issued its post-war election manifesto: Let us Face the Future. People like Barbara Castle, who were rising “stars” of the left, when Aneurin Bevan was chief demagogue, have lived to stand in the crumbling ruins of all the misguided hopes which they themselves helped to build. Once again the ludicrous spectacle is one where the reformers proposed and capitalism disposed. We are now living in their future.

Every group of workers in the NHS has been (and will continue to be) ruthlessly exploited by their Labour government overlords. (Yes, we know and by the Tories.)

The nurses, whose devotion to their patients has been mercilessly used by successive governments, were forced to organize, demonstrate and threaten strike action. Then the ambulance crews were pushed into the same position. The ward orderlies and laundry workers caved in under the weight of increasing drudgery and near starvation wages. The extreme reluctance of any of these workers to add to the suffering of the sick and aged, has been cynically played on by the Tory and Labour governments.

The latest miserable episode is that of the junior doctors. Driven by being on duty or on stand-by for as much as one hundred hours per week and working for as many as eighty hours with virtually unpaid overtime, they banned overtime. This brought about the closing down of wards, casualty departments and even entire hospitals. If this reads like a nightmare, that is what capitalism does to the dreams of reformers.

It should be understood, that dental decay, bad eyesight and tuberculosis etc., among the working class are very costly to the capitalist class, particularly in war time. Absenteeism from work with avoidable sickness has an adverse affect upon profits. A patch-up and back-to-work service is a wise investment for capitalism. Capitalists and their political hirelings certainly look at welfare in this way. Speaking at the Manchester Rotary Club on February 18th 1943, the millionaire Samuel Courtauld said, in reference to the Beveridge Report:


. . . social security of this nature will be about the most profitable long-term investment the country could make. It will not undermine the morale of the nation’s workers: it will ultimately lead to higher efficiency among them and a lowering of production costs.

The economics and priorities of capitalism remain supreme. The system has not been slowly eroded by the “gradualists” who thought they would whittle it away by reforms. They have been whittled away. They have nowhere to turn. Their political bankruptcy is exposed for all to see.

The rampant chaos and discontent in the hospital centres entirely upon money. Costing and inflation problems slowly strangle the postal “services”. The same considerations decree how much of the railways shall survive and whether steel mills and coal mines shall close down. They also dictate how much gas and electricity members of the working class may use. Nowhere have their plans worked. Nowhere has nationalization served working class interests. Perhaps the following has a familiar ring:


No Tory Government could make this appeal, for the workers would suspect that the summons to hard work, discipline and abstinence would result only in fortunes for the few and the later wastage of unemployment. The new Government is in a different situation. It also must appeal for hard work, discipline and, for a short period, continued abstinence. All these are needed to increase the total wealth for distribution. But a Labour Government at the same time can give concrete proof of its resolve to use this wealth for the benefit of the whole community. By its social insurance and health and housing plans it can show its determination to secure a greater equality in the distribution of wealth. By its nationalization proposals it can show its resolve that the re-equipment of industry shall not merely bring greater profits to the few. By its financial measures it can prove that, when this period of shortage is over, no return will be allowed to wasteful unemployment.

Aneurin Bevan, once said the Tories were “lower than vermin”. What does that make the Wilson, Castle and Foot mob? Regretfully, calling names however well deserved, does little to raise the level of class-consciousness. When the working class wake up, they will contemptuously brush aside these petty upstarts and, in fact, dismiss all leaders. Ultimately the responsibility rests with the workers. Their political maturity (or lack of it) is reflected in how they vote. The power to continue the agony of capitalism, derives from the votes of the workers. The power to end it, will come from the same source.
Harry Baldwin

The three quotations are to be found in the SPGB pamphlets: Beveridge Re-Organizes Poverty and Is Labour Government the Way to Socialism?
Posted by Imposs1904 at 10:46 PM