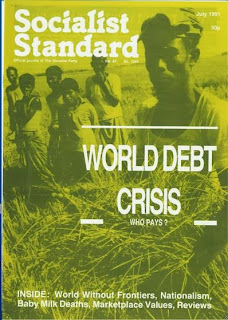 From the July 1991 issue of the Socialist Standard

So what was Russia before 1928? Well, says the SWP, it was the "deformed Workers State" that other Trotskyists say it still is. To understand this peculiar term you need to know something about Leninist and Trotskyist ideology. According to this, only a minority of workers can understand socialism; the majority can never advance beyond a trade union consciousness and support for trade-union based reformist political parties. The workers, therefore, on this view, need to be led by a vanguard party composed of the minority of revolutionaries. A "Workers State" is what this vanguard party establishes after the previous capitalist ruling class has been overthrown. So it is not actually a state controlled by the workers, but a state controlled by a vanguard party in the name of the workers.

When Lenin died in 1924 a struggle for power developed between a group led by Stalin and another led by Trotsky. It was the Stalin group that emerged victorious. Trotsky analysed this as a victory for the "bureaucracy" in the vanguard party over those in it who genuinely represented the workers (his group—naturally). Actually, it was a struggle within the ruling party which didn't involve the workers at all. It is this purely political event that, according to the SWP, meant that Russia went state capitalist in 1928.

This is an absurd position. If Russia was capitalist after 1928 it must have been capitalist before as well, since the economic position of the working class was exactly the same before 1928 as after. Excluded from ownership and control of the means of production, they had to work for wages and produce profits which went to maintain a privileged elite of Party and state officials. Political conditions weren’t all that different either: Russia had been a one-party state since Lenin's time and, with Trotsky's enthusiastic approval, the trade unions had become instruments of the state to discipline workers and mobilise them to work harder.

In saying that Russia only became state capitalist in 1928, the SWP is perpetuating the myth that Russia before 1928 was some sort of "workers" regime, even socialist (a recent issue of Socialist Worker said Stalin "smashed socialism" in 1928). This reveals a lot about the SWP's own conception of what they mean by the "workers state" they advocate. It too would be compatible with the rule of a vanguard party claming to represent the workers. It too would be compatible with the working class continuing to work for wages. So it too would be state capitalism, not socialism.

Next month: the contradiction between saying socialism can't exist in one country and supporting nationalist movements.
Adam Buick
Posted by Imposs1904 at 11:49 AM