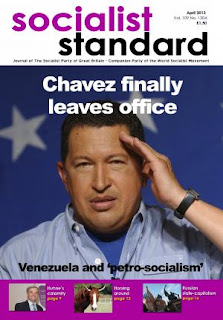 Editorial from the April 2013 issue of the Socialist Standard

For Hugo Chavez, there were no affectionate obituaries in the corporate press last month to describe his qualities and achievements and to ignore his less savoury actions as a holder of state power. Obits of this kind are reserved for the deaths of Western leaders, their allies and their puppets, and Chavez was none of these.  As almost every newspaper and TV channel told us, he was ‘a controversial figure,’ which in media code means a politician that does not support Western interests.   We were invited to disapprove.

Outside the exclusive circle of the corporate media, in the independent leftist press and on leftist websites another Chavez was evident:  Chavez, the hero, the reformer, the charismatic leader, the man with the common touch. Here we were invited to celebrate Chavez’s rejection of the West and Western capitalist values, and his building of a new form of popular socialism in Venezuela, spearheaded by social reforms.

Political obits of whatever colour are brand labels which demand only that we identify where our loyalties lie.  In reality, Chavez’s rejection of the West and his proclamation of a new popular form of ‘socialism’ were rhetorical moves in a political game that had nothing to do with economic fact.  During his presidency, he kept open the doors on the flow of Western capital into Venezuela, while introducing a familiar programme of nationalisation and social reform.   He did not cease to preside over an exploitative capitalist economy, nor did he cut off economic relationships with the West.

Where now for the country? Nicolas Maduro, Chavez’s vice president and named successor appears determined to hold on to power and is using his control of the state to crush opposition. It seems likely then that Maduro will lead the Chavistas back into power at the forthcoming elections and, if he does, it is doubtful that there will be any immediate change of policy – barring some unforeseen political upheaval.

Nevertheless, whoever fills the vacuum left by Chavez, and whatever policies they pursue, there remain certain mundane realities of capitalism that the new leaders of Venezuela must acknowledge and the country’s working people must endure. The Venezuelan economy must remain competitive on the international markets or it will die.  Workers must therefore be exploited.  Whether they are exploited by the Chavista state through its nationalised industries, by local corporations or by new employers likely to be brought in to support the country’s undercapitalised economy will make little difference to their lives.

The degree to which they are exploited will continue to depend on fluctuations in the economy, on their own capacity and will to resist the inevitable downward pressure on their incomes, and on government policy.  The fact of their exploitation, though, is inevitable. So is their relative poverty, their limited freedom of choice, and the lack of control they have over their lives. None of this will change until they and working people everywhere have ceased to put their faith in governments and charismatic politicians whatever claims and promises they make.
Posted by Imposs1904 at 11:06 AM