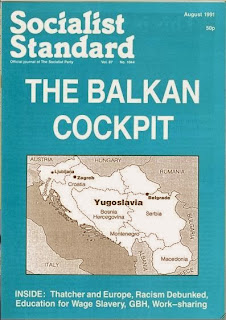 From the August 1991 issue of the Socialist Standard

Socialism, says the SWP, cannot be established in one country. Capitalism cannot be abolished within the borders of a single state because capitalism is an international system. Any attempt to do so is bound to fail. An isolated anti-capitalist state would still have to trade with other countries. So it would still be subject to pressure from the world market to keep its prices competitive by exploiting its working class and investing the proceeds in cost-saving equipment. The end result would be some form of national state capitalism, not socialism.

This is all good stuff and perfectly true. So we shouldn't support movements that seek solutions to social problems within a national framework? Well no, not exactly, say the SWP, we must support "all genuine national liberation movements".

So we are being asked to support movements that are either bound to fail or stand for the establishment of some national capitalist state. But why? Why should we support either type of movement? The SWP, however, insist that we should support movements like the Vietcong in the 60s and the Sandinistas and the PLO and the IRA even though they know that all these can achieve is some form of capitalist regime.

Some of their fellow Trotskyists try to get out of this contradiction by arguing that what the Vietcong and the Sandinistas established, and what the PLO and the IRA would establish would not be a form of capitalism, but some anti-capitalist transitional form. The SWP, quite correctly, won't have anything to do with this nonsense: in the context of world capitalism all countries must eventually conform to the pressures of the world market to run their economies in a capitalist way.

But, since the SWP does support these movements, on their own admission they are supporting movements to set up capitalist states and regimes. Which is an absurd position for people calling themselves "international socialists" to take up. Genuine international socialists would be advocating international (or, more accurately, world) socialism, not national capitalism, as the solution to the problems of workers and peasants in places like Vietnam, Nicaragua and Palestine.

The SWP position here is not just contradictory. It has disastrous practical consequences, as during the recent Gulf War when it led to them supporting Iraq "militarily but not politically" as they themselves put it. Since they knew perfectly well that Iraq was a capitalist country, this means that they were knowingly supporting one capitalist country in a war against another capitalist country. They were knowingly telling Iraqi workers that it was right for them to die in defence of the interests of their capitalist ruling class. A worse betrayal of socialist principles is hard to imagine.
Adam Buick