Running Commentary: Equality before the law (1987)

Equality before the law

The "rule of law" is one of those phrases that is tossed around freely by those who seek to maintain the status quo. It sums up the idea of everyone being equal before the law while no-one should be above the law. So one might have assumed that someone, apparently guilty of the crime of giving away £70 billion of "public" money illegally, would find the wrath of the judiciary descending pretty quickly. Not so, or at least not if you are the Secretary of State for the Environment.

Towards the end of last year, Nicholas Ridley, the environment minister, was forced to admit to Parliament that he and his predecessors had, strictly speaking, been acting unlawfully since 1981 in distributing £70 billion in rate support grant to local authorities. Of course when a member of the government breaks the law there's no real problem you simply change the law. which is what the government now intends to do by rushing a bill through Parliament which will retrospectively legalise what they’ve been doing for the last five years. Or, as Ridley put it: "It is merely validating the past and putting right for the future the position which the whole House thought always obtained". So much for the "rule of law". Clearly some people are more equal than others if they can change the law to "validate" in retrospect what was previously illegal.

It is hugely reassuring to have it, from so reliable a source, that there is this direct vocal link between God and Greater Manchester’s Chief Constable. Apart from the advantages this will give him in the afterlife, it enables James Anderton to speak authoritatively on worrisome issues like sex, drug addiction and AIDS.

The fact that their Chief is divinely inspired and informed may go some way to explain the activities of the police in Manchester. Unless we knew that it was with God’s approval, we might have written them off, too hastily, as a uniformed rabble of incontinently violent and repressive thugs. But now we know better, don’t we?

The real drawback with men like Anderton is that they offer themselves as caricatures, larger than life, to absorb the indignation against police excesses which should rightly be directed at the root of the problem.

Hating — and fearing — the Andertons (and who could possibly be fond of, or at ease with, them?) can lead to the conclusion that we need a police force purged of such ogres. While it is advisable to be especially wary of anyone at his level of authority who is insulated from reality by dangerous delusions, the cool fact is that we do not eradicate the problem by substituting Chief Constables with rather different priorities and opinions about their terms of reference.

The police are not there to be kind, understanding or protective towards us. Their job is to sustain class society and its privileges. A police force can no more be democratic than can a gang of criminals; both must operate in subterfuge, neither can be meticulous about respecting the rules if they can get to their objective more quickly by breaking them.

Privilege, power and secrecy are components of corruption so it is little wonder that, as we are occasionally allowed to see by courtesy of something like Operation Countryman, the police should so often be corrupt and lawless.

It is bad enough to live in a social system which needs a police force; even worse when the police themselves operate outside the law they are supposed to uphold; worst of all when the motivation of the police management is open to question. Beyond these facts, and of greater importance, it remains true that the only solution is in a society which will not have police, because the property rights they guard will not exist.


You have that on the authority of The Socialist Party and of all socialists everywhere. 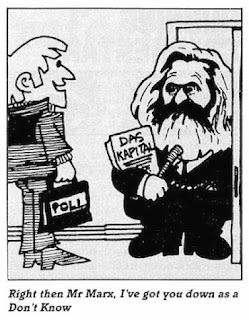 It must be hell, being Margaret Thatcher or Neil Kinnock, watching the opinion polls bob up and down, swing backwards and forwards. one day putting your party percentages ahead then a few days later changing it all around.

If the people of this country are really as fickle as the polls indicate, changing their minds almost from day to day on the question of which party should form the government, or which political leader is more reliable, what hope is there of them ever getting a useful insight into the workings of capitalism? Wouldn't life be a lot easier for Kinnock and Thatcher — and cheaper for their parties — if the decision about who takes power were left to a small, stable elite who are not easily influenced to change their minds? Several names spring at once to mind: Lord Hailsham. David Steel. Jim Callaghan . . .

Perhaps the polls have got it wrong? Maybe the voters are consistent but this is stifled by loaded questions, or gets lost in mistakes in sampling or processing?

There might even be another, more audacious. explanation. The polls may, within their limits, have got it right for the voters are giving deliberately inconsistent answers because they don't give a damn about the result, knowing that choosing between Tory, Labour and Alliance is really no choice at all.

This would be perfectly understandable and reasonable — encouraging, even — as it would indicate that some of the voters have at least begun to grasp the vital fact that all of these parties are equally impotent in face of capitalism's problems. They offer programmes which are basically the same and their appeals — for example that their leaders are cleverer, more sincere, more moral than the other lot — is also the same.

Faced with the offer of more of these failed, exhausted measures for persistent social ailments, the voters might resort to flippancy as an automatic emotional defence mechanism. If so, when they study the poll results, Thatcher and Kinnock might have bigger problems than they think.

There is, however, one uncomfortable fact that spoils that attractive prospect. Socialists are distinguished by our political awareness; we understand capitalism, how it works and why it must operate against the interests of the majority. We understand that the only way the capitalist parties can affect this situation is by fading away before a growing movement for socialism. We are clear about these issues, and consistent; we do not change from day to day, nor year to year.

Yet pollsters, because we don't fit into any of their categories of opinion, enter us as Don't Knows. Which is very, very frustrating. Never mind about Thatcher and Kinnock; it can be hell being a socialist.


A village in Yorkshire

"Work for no wages - you must be joking!" How often has this been put to us when talking about socialism? "Without money, what's the incentive? You'll never get people to do it". Our argument that in a sane world work satisfaction and the knowledge that we will be performing useful work will be the incentive brands us as impossibilists and Utopians.

The opening sentence was, in fact, spoken by one Bob Furness on his first visit to Botton — a village in Yorkshire founded in 1955 by Dr Karl Konig, an Austrian refugee who, since his arrival in Scotland in 1939, had opened and worked in schools for mentally handicapped children. His stated aim was to found a community where work


should be voluntary, without wages or salaries, so that whatever a person could manage to contribute to the life in the way of work, whether emptying dustbins or doing accounts, would not be valued by money but would be accepted as their full contribution to the community life, and all their needs should be met from the community, irrespective of their work output.

This is what Bob Furness had to say after a year in the village:

When I used to make roads with Wimpeys 1 did it for the money, the job was the way to the money. Now I make a road because it's needed. 1 know who I'm making the road for, it's my road and I care a lot about it. I want the people who use it to feel it was built with love and care.

Of course there isn't socialism in Botton. The place has religious overtones and, although "unwaged" in the best sense of the word inside the village, they have to trade with the outside world, selling dairy and farm products, bread, toys, engraved glassware and production from their Camphill Press. Socialism cannot exist in isolated pockets but Botton and similar villages which have been founded since does answer some of the points made to us. One of these is "You must have leaders". We quote from one of their leaflets:

It's often a problem when a visitor asks to speak to the manager — a request that always leads to a look of total puzzlement . . . The village is run by groups rather than the conventional director and underlings. There are many groups dealing with, for example, finances, the cultural life, the land, the reception of people into the village, production, and so on. Almost everyone is involved in a group. . .

The villages are witness to another important fact. People who, through their handicap. are unable to cope and are considered a burden on society in a competitive environment are finding that, with these pressures removed, they are able to lead useful and fulfilling lives.

The accusation that a socialist society will stifle individuality and that everything will have a dull sameness is also refuted in Botton:

The essential core of Botton is the family life in the houses . . . There are no separate staff quarters . . . Each house is individual, there is no centralisation so the character of a house often depends on the houseparents (who) are of many nationalities, so you can imagine the differences. With so many diverse houses of different character it always seems possible to find a lifestyle to suit a particular person's needs.

Botton and the other Camphill villages were founded as a worthwhile environment for mentally handicapped people in a hostile capitalist world. The establishment of socialism, by doing away with that environment which is hostile to all workers will bring about a world fit for all of us to live in.
(Quotations from Botton Village Life and Botton Village, a Special Story).

A post-script to the article in last month's Socialist Standard about the death throes of the Communist Party. It seems that yet another split is likely to take place, with the old guard of the CP threatening to break away to form a new party in protest at the present leadership which, they argue, are deserting traditional Leninist principles in favour of jumping on the trendy band-wagon of "rainbow coalition" politics — courting environmentalists, the peace movement and feminists instead of the industrial working class. The dissident Communist Campaign Group centred around the Morning Star newspaper, disowned by the present leadership. is planning a New Year campaign to try to win support from among workers involved in strike action, such as print workers at Wapping and teachers. This kind of political opportunism is matched only by that of the CP leadership, which rejects the arguments of the dissidents claiming that their approach fails to attract support, hence their own focus on more popular issues.
Posted by Imposs1904 at 11:32 AM