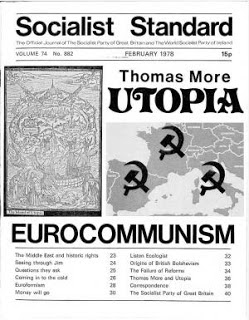 From the February 1978 issue of the Socialist Standard

As one day succeeds another, the question becomes whether there is anything this man, who was once thought to have been beaten out of sight by Harold Wilson, cannot persuade the working class of this country to accept. To begin with there is the extraordinary political sleight of hand which keeps this Labour government, although in a substantial minority in the Commons, in being. At one time this would have been intolerable—for example the Attlee government after the 1950 election never intended to keep going for long with a small majority, as did Wilson in 1964 and again in February 1974. Callaghan’s government survives by ignoring the arithmetic and by putting survival at the top of their priorities, whatever this may do to their policies and actions. Labour Party members who applaud such powers of endurance may reflect that at one time they claimed to be a party with some political principles.

Pay Policy
Then there is the matter of their pay policy. Like all their predecessors, the present Labour government made no secret of their intention to force down working class living standards. What is noteworthy is the magnitude of their success and the uncomplaining, even grateful, way in which the policy has been accepted. Former pay policies (which, in case there are any people sufficiently naive to think otherwise, are not policies for increasing pay) have succeeded for only a limited time, to be followed by a rush of pay claims which has done something to catch up on the lost ground. But Callaghan’s government intend that no such thing will happen; as the unions accept, even if with a few groans of complaint, each turn of the screw, Healey takes this as an invitation to give it another twist.

Treasury Minister Joel Barnett, whose jovial moustachioed face conceals a temperament with a steeliness useful to British capitalism, has recently talked about next year’s pay claims being kept within a new low of six per cent. And all of this without the need yet to resort to the formalities of a statutory pay policy, said by some to be the favourite doctrine of the permanent civil servants at the Treasury but which has been avoided so far by Labour ministers for political (that is, vote winning) reasons.

Among the government’s triumphs in this field has been their defeat of the firemen, whose job has an obvious social and human usefulness and whose strike enlisted a lot of support among the rest of the working class. And now, avoiding a confrontation, the miners have accepted a pay deal in line with the pay policy, leaving the likes of Arthur Scargill and Mick McGahey to gnash toothless gums in frustration. Each challenge to the pay policy is either beaten or circumvented and Healey and Callaghan continue, apparently unruffled.

It is not so unruffled on the Stock Exchange, whose members’ labours can be distinguished from those of the firemen by a marked lack of social usefulness. There, excitement reigns at the optimism of profits, for which Labour government policies can take some of the credit. Some typical comments from a typical City Page:

Through all of this—pay restraint, chronic unemployment around 1½ million, a happy Stock Exchange, all of them features which the Labour Party would once have condemned as symptoms of capitalism’s decadence—Callaghan’s composure remains. His air of relaxation is well established; according to one close observer (Joe Haines—The Politics of Power) Callaghan from the start was ". . . not trying to break into the Guinness Book of Records for the amount of work done in twenty-four hours.”

There is, of course, sound precedent for this. Twenty years ago Harold MacMillan had just taken over the Premiership, as Eden cracked under the combined strain of his own ill health, a turbulent Tory Party and his efforts to keep up the power of British capitalism in the Middle East. MacMillan preceded Callaghan in the technique of doing the opposite of what the party faithful expected of him, carrying it off not by appearing to be a human dynamo but by assuming an air of indolence which the workers found strangely reassuring.

MacMillan’s political end was not as sticky as it might have been and as he went down he was able to justify himself as a man whose high principles, not to say naivety, failed to equip him to deal with the worldly intrigues of the Profumo scandal. And he is still there, in the background, occasionally pontificating upon some issue, or reminiscing, or turning up at the funeral of some contemporary of his. In our wilder moments it seems that he will go on forever— but of course that is an illusion; it is only the deception and the cynicism and the acceptance of it by the working class which endures in face of all reason to do so.

Political parties come into power on promises to do something to alleviate the nasty bits of capitalism. In their election programmes they assure us that it is all very possible for this social system to be organized in such a way that our lives become a succession of sunlit, happy days. Naturally, there are one or two problems to deal with first—the balance of payments, or the threat from Russia, or inflation, or the dollar gap, or unemployment, or something else. But the solution, they tell us, is pretty simple. We need only to vote for them and such is their strength, honesty, knowledge, skill, that very soon everything will be put right. They emphasize their own, personal abilities; for example in the last general election there was an especially effective Labour Party broadcast in which one Minister after another told us how cleverly he or she had been grappling with the problems of British capitalism, with Wilson at the end proudly telling us that we had just been watching Labour’s team. Enough workers fell for it almost to put Labour back into majority power and millions more fell for the same line from the Tories. The whole thing was a massive vote of confidence in capitalism and for the theory that the system can be made to work in the interests of the majority of its people.

Confidence Trick
What this theory amounts to is that capitalism can be persuaded to act out of character, in an unnatural way. Put like that the confidence trick seems transparently obvious. So how do the politicians get away with it? The answer is partly in persuading the working class that they can securely support capitalism because the leaders are specially able people. This explains the mighty public relations campaign which surrounds and escorts the leaders wherever they go. A few years age this process was exposed as The Selling of the President and while the voters may agree that their leaders are sold to them in attractive, but opaque, packaging with some deceptive sales literature, they have yet to realize that they are in any case buying rotten goods.

They might also count the cost to themselves of the transaction. Capitalism costs its people their freedom, their health, their security, their hope of realizing themselves to the full extent of their human abilities. In return it gives them a shoddy, repressive world in which they consistently under-achieve to the point where ambitions are distorted or utterly withered. No used car was ever so bad a deal as this.

And then the workers might consider whether it need happen at all. This entire rotten system rests on the assumption that we can’t do any better. So the majority prefer to trust a few leaders to do it for them. The case for a new society insists that we can do better—so much better that we can barely conceive of it. But first of all we must trust ourselves.

Or will the working class go on, falling for the confidence tricks of the likes of Big Jim, who is represented by his publicity men as everyone’s favourite uncle but who in reality stands for anything but a happy, worldwide family.