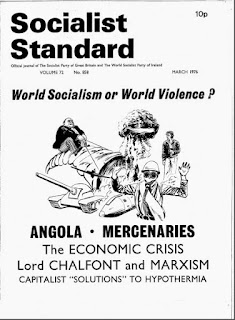 The popular lie, often put forward by champions of Britain’s welfare state, that “no one starves to death here any more” has currently been exposed as such by the recent high-lighting in the media of the condition known as hypothermia.

But hypothermia (or “low heat”) is nothing new. Old people have died by the thousand from lack of food, fuel and clothing for years under the welfare state. But only lately has there been significant publicity about it. From the Sunday Express 1st February 1976 we learn, “Soaring fuel costs which lead to thousands of old people economising on home heating were blamed yesterday for a massive rise in the number of elderly patients being taken to hospital suffering from effects of cold . . . One theory being put forward for the higher than ever toll is that pensioners, many living alone on small incomes, are frightened of using heating and lighting appliances because of the cost. So they sit at home without heating . . . Pensions, with the present price of electricity and food, don’t go very far”

From the Daily Mirror 2nd February 1976: “The tragedy spotlights the problem of hypothermia which claims an average of 45,000 lives in Britain each year . . . Ninety thousand old people have been given a twin death sentence—by the coldest weather for four years and rocketing fuel prices . . . The Department of Health and Social Security recommends a minimum temperature of 70 for homes. Yet a survey shows that 89 per cent of pensioners’ living-room temperatures were below the Government standard. And that was before the increased fuel prices.”

To the Socialist the answer to the problem would seem obvious. Food, fuel and clothing, like all other needs should be freely available (not only to the elderly) to all human beings.

But what are the capitalist solutions to the problem? Call in on elderly neighbours to find out if anyone is actually dying. (Milkmen are regarded as being useful here.)

Doctors can obtain special wide range thermometers so that if they find a cold, collapsed old patient in a cold house, lacking food, fuel and clothing they’ll be able to pinpoint the diagnosis.

And, so public-spirited is the Daily Mirror that on 7th February 1976 they devoted a front page to the problem. Indeed, the way they launched their “campaign” one almost got the impression they were offering to finance food, fuel and clothing themselves. But, in fact, what they came up with was a free “cut-out” sos sign for those dying of hypothermia to put in their windows for the milkman etc. to see. And listen to the further contributions of these philanthropic crusaders:- “If you know old people who live on their own, make sure they have a copy of the warning poster” (and the Daily Mirror supplied it free remember.) "If you see the Daily Mirror's SOS sign in a window, see what help you can give. Knock on the door and give all the help you can”.

But the altruistic Mirror also gives a good capitalistic reason for donating SOS signs to the dying. It quotes Mr. Hugh Faulkner, director of Help the Aged who “welcomes the Mirror's campaign.” “The plight of the old is frightening this winter. The winter weather has really hit us now. Food and fuel bills are higher than ever before and pensions have just not kept pace with inflation. Someone, sometime will eventually realise it is cheaper for the nation to keep old people warm and well fed in their own home than have them go to hospital.” (our italics). So please help “the nation” to do it cheaper, chaps!

Still the Mirror:- “Everyone can help to alleviate the suffering and misery which is piled on old people year by year”, (they don’t say by whom). Then, in thick type:- “Today, the Daily Mirror appeals to everyone to help the old to survive winter. Be a busybody and you could save a life.” Then a broad hint that the neighbours should come up with the necessary funds: - “Check that the old man or woman living down the road is all right. Make sure they are warm and have enough food. If not, get in touch with the local welfare services and run a few errands to stock up their food larder.” Other advice the beneficent Mirror gives free is:- “make sure there is an efficient heater. . . . and they need at least one hot meal a day and frequent snacks and hot drinks.”

Actually, another newspaper takes the prize. The Stoke-on-Trent Evening Sentinel comes up with this:- “A cheap thermometer to alert old people to the dangers of cold and hypothermia went on sale at Stafford today. The thermometer at 20p, is being marketed by an Essex firm as a non-profit making venture.”

Four chemists in the Stafford area have agreed to sell the thermometers which are blue and white. When the temperature falls to the blue zone—below 60 Fahrenheit—it indicates danger to the old people from cold. “This may not save lives but could alert people who may not realise they are in danger”, said Mrs. Jane York, the firm’s social representative. “The see-at-glance thermometer could also warn social workers and visitors of old people at risk,” explains Mrs. York.

What useful gifts—stick one of these on their wall and the pensioner dying of cold will be able to see exactly why.

It makes one marvel at the bitter irony and cynicism which can unconsciously be spewed out by people not wanting to face the obvious. Were it not so tragic it would be hilarious.

The author, R. B. Gill, was himself a medical doctor.