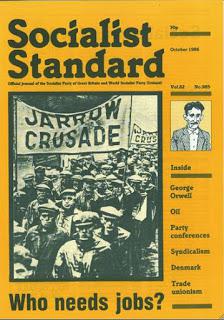 From the October 1986 issue of the Socialist Standard

The general election is coming and the dinosaurs of capitalist politics are making their way to seaside towns, there to think up ways of winning votes from wage slaves. Out will spew the cliches and the promises and the rhetoric of reformist hope. Into the homes of the working class, via TV and press, will come the speeches of sterile minds locked into a system long past its historical usefulness. Capitalism is outdated: it is out of line with what we could produce to satisfy needs, with how we could live if only we threw their system onto the scrapheap.

At the party conferences those who believe in capitalism — the utopian form which they think will result from their schemes — talk themselves into beliefs which are defied by experience and logic. The Tories proclaim that all we need is a few more years of Thatcherite toughness. The Liberals giggle among themselves, consoled with vague hopes about forming a different kind of government — with the SDP to lend a bit of extra indecision to their confused outlook. Then the Labourites — nice, new slick Kinnocky types —make speeches about how it will not be easy under them, but at least the suffering will be administered by men who know how to look like they care.

At every Tory conference at least one nutter is allowed up to give the troops what they want: whipping soccer louts (back to public school perversions for a few backbenchers) and giving the school kids a few more Victorian values to screw them up. Anything to please the old ladies with blue rinses: after all, the silly old ducks will be leaving their fortunes to the Smith Square coffers before too long. At the Liberal conference they usually put up at least one philosopher each year: invariably a bearded chap from Yorkshire who drones on about fairness in the rural areas and better bus services for the disabled. Liberals clap and think of Gladstone who by all accounts was a right old swine. Every year the Labourites allow up one — sometimes more — r-r-r-revolutionary who yells about Clause Four and betrayals by the leadership and dire warnings that the kids in Liverpool can only take so much. These are the exceptions, allowed to get near the microphone so that the believers can be heard.

Most people who attend party conferences are followers. Their political function is to clap, cheer and. on special occasions, give standing ovations. On very special occasions — like the cabinet being almost blown up they're allowed to offer standing ovations before the speech has even been made. Saves listening to it. These are the political fools: the men and women who have been conned by hopes for capitalism. Some of them lose their foolish illusions and stop clapping; more of them will. You can't listen to politicians for very long without having a few doubts.

Apart from the fools there are the rogues. The climbing boys of politics — nothing to do with chimneys, but twice as dirty. Their task in life is to get power. Not power to share or power to help or power to teach, but power to dominate the powerless. They look at it this way: it's a filthy bloody rat-race out there, so I had better aim to be the top rat. Life in a capitalist political party is not. as many outside them believe, mainly about distributing leaflets and debating policies. Such trivial pursuits are left to the fools. The real struggle in politics is between the rogues: the committee manipulators; the infiltrators; the rule-twisters; the gasbags who know how to squeeze a few votes out of someone else's misery. To be a successful political rogue involves back-stabbing, petty and less petty corruption, and deviousness turned into an art form or a perversion. If you want to succeed in politics (as opposed to being a following fool, which is free and open to any sucker) have no illusions about principles or honesty or decency. They are not the qualities required for winning the race to become a governor within capitalism — they are the characteristics required for losing it.

Then there are the liars: the ones who pretend. These political know-nothings are either the victims of bad memories or. more often, they live in the expectation that workers are suffering from a collective loss of memory. There are Labourites who talk about the good old days of social justice when hospitals never closed down and it was a pleasure to be a wage slave. Or the Tories who tell us how much better off we are now that Britain has had seven years of "sensible'' government. We are expected to swallow these myths, like kiddies who are told that if they go to sleep early on Christmas Eve Santa will deliver the goods. The liars are only happy when workers are half-listening, half-observing, half-remembering. Then they can catch us with their speeches, crammed to the top with well-flavoured deception. The fools like it; the rogues use it; Kinnock, Thatcher, Owen and Steel are doing "very nicely, thank you" out of it. The workers have nothing to gain from putting up with it. Let them have their sterile conferences and immerse themselves in the dogmas of an anachronistic social order. The conscious working man or woman will see through the illusion, and seen through by enough of us it will not be there.
Steve Coleman
Posted by Imposs1904 at 4:33 PM