Ourselves and the Socialist Labour Party (1913) 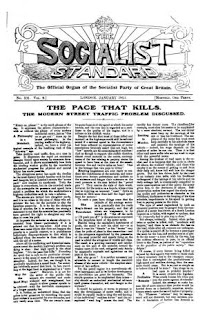 Editorial from the January 1913 issue of the Socialist Standard

In the fifth edition of the Manifesto of the Socialist Party of Great Britain we point out, in reference to the S.L.P., that “its founders did not comprehend the real significance of the revolutionary struggle,” and a glance at the rambling record of that organisation will prove conclusively that, as a party, it is to-day as ignorant of the revolutionary rôle as were its founders at its inception.

Pinning its faith to political action alone, and advocating a series of capitalist reforms, the S.L.P. for a time tried to ignore the “economic field,” then, realising the error of this, they declared for Socialist Trade Unions, and instructed their Executive to proceed with the formation of the same.

They also realised the stupidity of reform-mongering, and, dropping their palliatives, they denounced all reforms as useless and reactionary. At this stage there seemed to be a slight prospect that the S.LP. might see the Socialist fight, but, unfortunately, a few Anarchist spasms in the “Labour movement” in America gave birth to an “ Industrial Workers of the World.”

This sounded big, and the SLP. were carried further adrift. Denying their previous declaration in favour of Socialist Trade Unions, they endorsed the American I.W.W., and gaily proceeded to denounce all Trade Unions as effete.

The new method — Industrial Unionism — became the Alpha and Omega of their “philosophy.” Political Action was thrown overboard, and the workers were told to “take and hold” on the economic field, and thus emancipate themselves. “Direct action.” “sabotage,” and other Anarchist theories got such hold of their members that a vote was taken to find out how many were Anarchists, but the result was never published.

However, to be in something “big,” the S.LP. on the economic field does not now scruple to call comrades those they previously denounced as fakirs, and who, on the political field, they called “unclean,” while, to allow to enter the S.L.P. itself those they previously strove to keep out, an alteration Iras been made in the hitherto “too rigid” constitution!

How the weak have wobbled ! As the self- styled “fighting S.L.P.” (with uplifted arm and hammer as their motto) they originally claimed to be the only Socialist party, and declared themselves to be out to smash all but themselves. Their fighting propensities however proved to be but vulgar abuse and puerile personalities, and eventually tiring of these, the “fighting S.L.P.” has become the frightened S.L.P., and solicits, cap in hand, the co-operation of all sections of the working class, as the correspondence published hereunder will show.

I am directed by the National Executive Council of the above Party to write to you with reference to the present situation in the Balkan Peninsular.

The position is admittedly critical, and there is every indication of the European powers being involved, and then a grave danger of a European War.

Such a war would prove highly reactionary to the progression of the Working Class. My Executive are of opinion that every possible means should be taken to prevent such a disaster, and they believe the occasion is one calling forth a strong agitation against war.

Such an agitation to be effective must be carried out on a large scale, and could only be brought about by the co-operation of all sections of the Working Class Movement.

My Committee think the existence of differences of opinion in the various organisations should not prevent a common agreement on this matter.

I am directed therefore to approach the various organisations in Great Britain with a view of securing their co-operation for the following proposals:—

I shall be glad to hear from you if your organisation is prepared to co-operate in carrying out snch a scheme. If so, we suggest that a conference be called aa early as convenient, wherein the whole matter might be worked out in detail.

Hoping to receive an early reply,

Your letter, addressed to us by direction of your National Executive, inviting the Socialist Party of Great Britain to co-operate in some form of an Anti-War campaign, was read to the Executive of that Party at its meeting last night, and instruction was given for the following reply.

The Socialist Party of Great Britain declines your invitation.

The Socialist Party of Great Britain refuses to suspend its propaganda of Socialism, its intelligent prosecution of the Clans War, to join with those who may be prepared to “shout” against wars far away, yet are often found ready to deny the existence of the greater war—the Class Struggle —here at home. The Socialist Party knows that wars are a feature of Capitalism. When the Socialist Party is strong enough to prevent war it will be strong enough to overthrow Capitalism; meantime it can only protest against both, but it dare not betray Socialism by uniting with defenders of Capitalism to protest against a feature of that system.

What simpletons your Executive Committee must be if they seriously believe that those of the master class who have the power of forcing war, or of declaring peace, would be gulled by any protest emanating from such a group of mutually warring elements as you propose to suddenly call together.

Your desire to be in something “on a large scale”—the thirst for publicity and notoriety— should not be allowed to blind yon to the fact that the master class are quite capable of appreciating a protest at its real worth. They know (as we know) that the only protest they need ever fear, is the protest of the class-conscious workers organised in the Socialist Party. That protest has been, and is still being, made in our Press and from our platform, and its effect must not he impaired by our joining with those who do not understand. Those who would be with us must be with us for Socialism ; if not, they are against us, and between such there can be no co-operation, no compromise.

On behalf of the Executive Committee of the Socialist Party of Great Britain,
A. L. Cox,
General Secretary pro. tem.