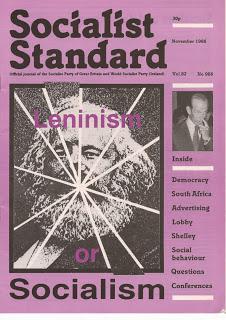 From the November 1986 issue of the Socialist Standard

How many times have you heard apologists for capitalism spout such slogans as "the jobs won't come to you", "a fair day's work for a fair day's pay" or "on yer bike!"? They're all akin to the offensive adage "society doesn't owe you a living". Capitalism is a society which owes the majority nothing, and anything we need must be worked, if not fought, for by prostituting our mental and physical abilities to the whims of the market system.

The most disturbing thing about the idea that capitalist society doesn't owe us a living is not so much that it is undeniable reality, but that it often originates from the lips of workers themselves. They might as well say "the system is at liberty to wring out of me everything it can get". So why is it that the majority of people are willing to abide by capitalism's rules and expect no more than a subsistence of relative poverty in return?

One reason is that it's not the majority, the wealth producers, who make the rules. Instead the rules, enshrined in the edifice of the legal system, are made by the ruling class which legally owns and controls most of the wealth and wields economic power over the working class. These rules do in fact guarantee the members of the ruling class a living, but because of differences in the way such regulations apply to the two classes, there is no promise of due recompense for us.

As far as workers are concerned, the rules apply something like this:

These are the regulations as experienced by the majority of individuals and are clearly more than a little biased. Here roughly is how the rules apply to capitalists:
So the statement holds true: capitalist society doesn't owe us, the working class, a living. In fact, the hideous reality is that it is we who owe the capitalists a living, through no choice of our own. Capitalists, through their legal claim to wealth, are ensured of a privileged and comfortable existence without ever needing to dirty their hands on a tool or machine. They are not obliged to sell themselves to an employer, to have a proportion of the wealth they produce stolen from them in the form of profit. (Theft is of course against the rules for workers). The prosperity of the few is indeed founded on the exploitation. coercion and acquiescence of the many. We'll never get "fair play" or "compassion" or "equality" when the rules are stacked against us. Play by the rules and you'll be left alone to squirm; buck against the rules and you'll be dealt with severely.

One day, society will owe to all an equal and undeniable right of access to the wealth produced, in a world where everyone works to benefit the needs of all. But our just deserts won't be owed to us by way of a legal contract, but because all will contribute voluntarily and co-operatively and take what they need because everything will belong to humanity as a whole instead of being the property of a parasitic minority class.
Nick Brunskill
Posted by Imposs1904 at 2:29 PM