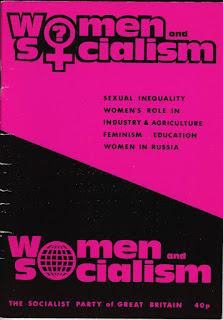 Party News from the August 1986 issue of the Socialist Standard

For thousands of years and in most societies in the world, women have had a worse deal than men. Even today, in the "advanced industrial nations", where physical strength has ceased to have any real value on the labour market, men still get the jobs with more pay. more prestige and more power. Feminists have pressed for, and won, the vote and various pieces of legislation designed to give women equality in education, property rights and employment, but the basic inequalities remain.

Why has feminism failed to bring about women's liberation? A condition which affects half of the working class like this is of major importance to socialists. The new pamphlet produced by The Socialist Party and issued this month re-examines the whole question, looking afresh at the origins of sexual inequality, and then at all the disappointing attempts to rectify it The Russian revolution, which was supposed to be ushering in sexual equality with socialism, did neither; and the pamphlet draws out the inescapable conclusions about Russian society which follow from the present condition of women there.

Particularly valuable to socialist speakers and writers is Chapter Two. which analyses the three main strands of feminist theory and endeavour. Full credit is given to those elements of social analysis which are accurate and unique to feminist thinking And one cannot help but admire the dedication and self-sacrifice of so many of the campaigners for "women s rights" But the fact that so little real advantage has been gained after all this time and effort is, in the end, clearly the result of a fundamental fault in the feminist theory of sexual inequality and discrimination.

Socialists, male and female, are striving for the real emancipation of women. Our analysis shows, however, that this is not an aspect of society that exists in isolation and can be dealt with separately. The last chapter of this new pamphlet demonstrates in detail that the oppression of women can only be effectively ended by eradicating the underlying conditions which cause and perpetuate it. It is a pamphlet which fills a long-standing gap in socialist exposition.
RC

My guess is that 'RC', the author of the above review/blurb, is Ralph Critichfield, better known as 'Ivan' in the pages of the Socialist Standard.

See also this report from the January 1987 issue of the Socialist Standard for details of SPGB propaganda meetings relating to this pamphlet: