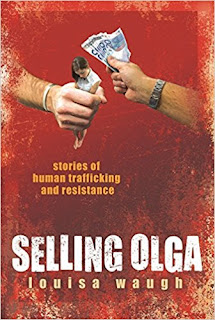 Book Review from the February 2008 issue of the Socialist Standard

The Olga of the title is a Moldovan woman who was earning 35p a day working in an outdoor market. In desperation she and a friend replied to a newspaper ad promising well-paid jobs abroad, and were told they would be caring for elderly people in Italy. They ended up being sold to a bar-owner in Kosovo, where they were forced to work as prostitutes. After two years Olga managed to escape and returned to her home town, where she was housed and supported by the International Organisation for Migration. During her time in Kosovo she was beaten so badly that she lost almost 70 per cent of her sight.

Louisa Waugh's book is full of appalling stories such as this, of women trafficked into the sex industry and forced to 'repay' those who arranged their journey and employment. Not all trafficking involves sex slaves, however, and many of those smuggled to other countries work in construction and agriculture, among other industries. The International Labour Office estimates that two and a half million people are caught up in trafficking, though others give far higher figures. In Moldova it has become one of the largest national industries, while Albania is another big source of trafficked women.

And what are the causes of this shocking 'industry'? One is the fact that many men are willing to pay for sex, so pimps can make a profit from it. But on the supply side the answer is one simple word: poverty. Waugh quotes the director of an organisation called the Useful Women of Albania: "Women are trafficked from Albania because they are desperate to leave in the first place . . .if women are living here in poverty and they have nothing, then they will sell the only thing they can make money from: their own bodies." The line between those who are trafficked and those who migrate 'freely' is a thin one. A report for Save the Children referred to "a steady rise in emigration for voluntary prostitution abroad in order to escape poverty and bleak futures in Albania." But prostitution can rarely be voluntary in any real sense, and few of the women who migrate in order to earn money from selling sex are prepared for precisely what awaits them.

Many governments in Western Europe, including the UK, have addressed the problem of trafficking by cracking down on illegal immigration. But this has only led to the creation of an underclass of undocumented migrants, a group which includes those who died in Morecambe Bay in 2004. Forced labour — not confined to sex work — is an important part of the British economy, for capitalism wants cheap and pliant labour power. The extremes to which it will sometimes go to obtain it, graphically depicted in Waugh's pages, show why it's necessary to get rid of this diabolical system.
Paul Bennett
Further Reading: