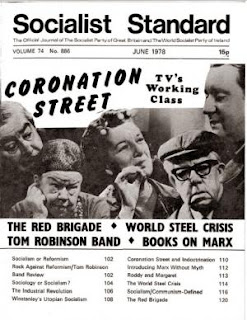 From the June 1978 issue of the Socialist Standard

WHAT IS CORONATION STREET? A row of terraced houses, At one end is a pub called The Rover's Return where the locals spend the best part of their leisure time. The locals are our old friends; we know them better than our next door neighbours. There's Stan Ogden, the luckless window cleaner and his wife Hilda, there's Ken Barlow, the local intellectual and his Uncle Albert, there's Ena Sharples and her friend Minnie, the Langtons, the Faircloughs, Emily Bishop, Elsie Howard, Annie Walker, Alf Roberts . . . they've been there for years, every Monday and Wednesday at 7.30 p.m. We've watched their hard times, their family problems, their love affairs, their hopes and heir disappointments. We accept Coronation Street as an extension of the streets in which we live.

CONVENIENT ENTERTAINMENT
Coronation Street is an integral part of the culture of British capitalism. It influences the consciousness of television viewers far more than the paintings of Picasso or the plays of Pinter which fit more traditionally into the category of culture. Most of us spend a large part of our leisure time watching television; it is not surprising that it affects the way we see the world. It is fashionable to condemn workers for watching television, especially for watching soap opera like Coronation Street, Such criticism comes from those people who have the time, money and inclination to pursue what are commonly considered to be more 'cultured' pastimes. For the working class television is the most convenient form of entertainment.

In years to come the present age will be remembered far more by the records of television than by a hundred volumes of bogus sociological jargon from academies. Fiction can tell us more about the past than records. Engels, writing to the English novelist Margaret Harckness in April 1888 says that:

Balzac whom I consider a far greater master of realism than all the Zolas past, present and yet to come, in La Comédie Humaine gives us a most wonderfully realistic history of French 'society', describing, chronicle-fashion, almost year by year from 1816 to 1848 the progressive inroads of the rising bourgeoisie upon the society of nobles, that reconstituted itself after 1815 and that set up again, as far as it could, the standard of la vieille politesse francaise (old French refinement). He describes how the last 'remnants of this, to him, model society gradually succumbed before the intrusion of the vulgar moneyed upstart, or were corrupted by him; how the grande dame whose conjugal infidelities were but a mode of asserting herself in perfect accordance with the way she had been disposed of in marriage, gave way to the bourgeoisie, who corned her husband for cash or cashmere; and around this central picture he groups a complete history of French society from which, even in economic details . . . I have learned more than from all the professed historians, economists and statisticians of the period together."

If the writing of Balzac can so realistically reflect the class struggle, what about Coronation Street? Can it be dismissed as harmless entertainment or is it politically subjective in the way that television news coverage more obviously is. To put the question in perspective let us consider two contradictory points of view on the nature of 'culture' in society. Graham Hough, writing about the rise of modernism in his Reflections on A Literary Revolution argues that

Literature by a fortunate dispensation, does not reflect very accurately the convulsions of the social order. Its revolutions sometimes precede the social ones, sometimes fellow them. sometimes, it would seem, overlap them quite pointlessly . . .  But as soon as we begin to look closely at a particular patch of literature we are likely to see it developing according to its own principles, which have their own interest, and are likely to be at least fortuitous in their relations to the wars, technologies or movements of classes that are their temporal accompaniments. The dispensation is fortunate, for it is a happy instance of what we mean by the freedom of the spirit.

The alternative point of view is put by Allan Rodway, writing about Romantic poetry in The Romantic Conflict:

Chance could hardly ordain that in England all those coming to maturity between 1789 and 1830, and possessed of poetic genius, should have been born with a romantic temperament while the genius of, say, 1689 to 1730 was born Augustan. We are force d to the conclusion that the milieu probably encouraged one type of genius and inhibited another. The art-form is inseparable from. the circumstances of the age.

Hough's view, that 'Art' is divorced from the laws of social motion is surely absurd. Ideas are social in nature; the mind could not possibly conceive an image which has no basis in society any more than the hand could touch a non-existent object. Chaucer could not have written The Canterbury Tales in Roman Britain, Shakespeare could not have written Look Back Anger, Coronation Street would have had no meaning in the Sixteenth Century. Marxists reject Hough's 'freedom of the spirit', but at the same time reject the mechanistic notion that 'Art' can only ever be between ideas and society is not always joined by a straight line for the benefit of vulgar determinists.

To what extent does Coronation Street reflect the society in which we live? It is reflective in that it conforms to the social relationships of modem industrial capitalism: there are those who are forced to work in order to live and others — the usually unseen bosses are able to live without working — unsurprisingly the latter class are not found inhabiting the slums of Coronation Street; the characters pay for the necessities of life, such as food, clothing and shelter; there are women who are expected to stay at home and do housework or else find menial employment and men who are expected to be hard working, virile and socially dominant (if, like Stan Ogden, they do not exhibit these characteristics are expected to laugh at them); there are 'educated' people (like Ken Barlow) who talk about and organise things when leadership is required and formally uneducated people (like Stan or the barmaids) who know their places and can't pronounce long words; there exists an implicit hierarchy of social roles, and a natural uniformity of class position. These relationships are never challenged; they are shown to be natural.

Drama rarely reflects what society is really like, It an idealised picture of what dramatists and their patrons (in this case the television company) want to be like. Coronation Street is not the reflection of life under capitalism, but the reflection of prejudices about life under capitalism. It is the gap between realistic reflection of human life (which is what dramatic honesty is all about) and the subtle extraction of its social consequences which makes Coronation Street a piece of political propaganda. It is a representation of capitalist society with the class struggle neatly. removed, which is about as honest as a representation of Beethoven without commenting on his music. The writers, actors, and director attempt to convey particular images of capitalism, for example that workers wear cloth caps and are basically both stupid and lazy, that women are naturally inferior to men, that nice things happen to 'good' people and 'baddies' always lose. These prejudices are not based on an objective examination of society (if they were then Socialism would be impossible and we could all retire to The Rover's Return), but on the beliefs and requirements of the capitalist ideology. The ideology of Coronation Street provides the ruling class with immense optimism - there are no Socialists down Coronation Street, not even a single looking vaguely like he could read, let alone understand, a piece of Socialist literature.

Not that the elimination of the problems of capitalism would have any relevance to these fairy tale characters. The desire for Socialism arises out of real problems facing real workers in real life. Down Coronation Street these problems are never experienced. No unemployment, no homeless families, no battered wives and kids, no old people dying from the cold, no demands for better wages. The scriptwriters have eradicated all the problems of Jim Callaghan's England with a stroke of the pen. The only problems which exist are due to 'human nature'. Coronation Street is a capitalist's utopia: the slum paradise.

SELF INDOCTRINATION
Does this mean that television soap opera is merely The Epilogue in single syllables? As we settle down for our twice weekly intrusion into non-existent people's intimate affairs are we in fact pressing the button for our own indoctrinaticn? The BBC and IBA undoubtedly see it as part of their function to persuade the working class to accept certain 'virtues', such as hard work, family life, sex roles, obedience etc.

By reinforcing popular myths Coronation Street performs an important political service to capitalism That alone does not mean that it, and television drama in general, should be ignored. Coronation Street is entertaining in a perverse sort of way — more people watch it than any other programme according to most week's audience ratings. However, we should remember Marx's dictum that the capitalist system creates its own gravediggers. It has at times used the Church as propaganda, but that has not prevented some sections of the religious establishment from pointing to the inadequacies of the system. It has used schools and Universities to inculcate its values, but within modem education there are people with unorthodox values. It has used television drama as propaganda, but to be effective the viewers have to be politically ignorant. Regular viewing of Coronation Street leads to the passive acceptance of prejudices which prevent working class consciousness.