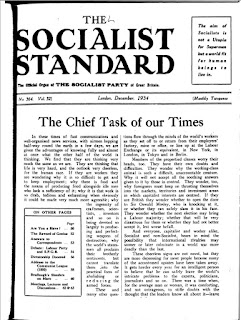 From the December 1934 issue of the Socialist Standard

A Debate was held at the Working Men's Club, Holborn, on Friday, October 19th, on the question: "Which Party is working for Socialism, the Labour Party or the S.P.G.B.? There was an audience of 500.

The Case for the Labour Party
For the Labour Party, Mr. G. H. Loman, prospective Labour candidate for Kingston, first congratulated the S.P.G.B. on their analysis of the social system and the class struggle, which was the most clear, lucid, and logical which he had ever read. The Labour Party had the same object—Socialism. Its express aims were peace, freedom and justice among the nations; equal opportunity for all men and women for a healthy, self-respecting existence; and to convert industry run for private profit into a planned national economy.

Industry, however, could be socialised in all sorts of ways, he said—by confiscation or compensation. And the Labour Party had said it will pay compensation, so as to prevent inequities as between different sections of the community, and to avoid antagonising foreign Powers. We want Socialism introduced in as humane a manner as possible, and not to bring starvation in the place of poverty.

Now, said Mr. Loman, the S.P.G.B. says Parliament us the seat of power, but we believe you must first take over the financial machinery—the Bank of England. If the House of Lords were obstructive, we should abolish it as a legislative chamber. And, having a mandate from the people, we should use the armed forces to put down opposition.

Mr. Loman said that he expected his opponent to deal with the Labour Party's past. But it is not fair to quote the words or actions of leaders who have been repudiated by the solid rank and fie of the Labour Party. We have done with the reformism of the past. We are going to the electorate to tell them we are out to introduce Socialism, and to convince them that Socialism is a practical alternative to the present system. We agree that only the working class can achieve the common ownership of the means of production and distribution, and the Labour Party will not accept office unless it has a majority of votes for Socialism throughout the country. But the S.P.G.B. is being idealistic when it  says that the mass of the workers must first understand Socialism. The social conditions—starvation in the midst of plenty—will demand Socialism long before the workers are educated for it.

The theoretical principles of the S.P.G.B. are excellent, but it is not surprising that that Party is so small, since they oppose all other Parties—condemn the Labour Party for administering capitalism; condemn the Russian experiment as State capitalism; condemn the I.L.P., the Co-operative movement, the Communists and the Fascists. The S.P.G.B. may not have much of a past, and they do not seem to have much of a future. If you are going to get the sympathy of the workers you must first find a point of contact. The Labour Party tells the workers what Socialism means in terms of concrete domestic measures.

The Case for the S.P.G.B.
For the Socialist Party of Great Britain, "Robertus" first defined its object as "the establishment of a system of society based upon the common ownership and democratic control of the means and instruments for producing and distributing wealth by and in the interest of the whole community."

Socialism is necessary because everywhere we are faced with the contrast between untold wealth for a few and a very much-told poverty for the many. Three-fifths of the total income of this country, for instance, is shared by one-tenth of the people, whilst only two-fifths is left to be shared among the other nine-tenths. This contrast is only possible because one class, the capitalists, own the means of production; and the only remedy, therefore, for the poverty of the workers is to convert the means of life into the common property of society as a whole.

To do this, the working class must organise, consciously and as a class, to obtain control of the political machinery (which includes the armed forces). And this task is the task of the working class itself, without regard to leaders of lords (some of them created by the Labour Party!). For the successful termination of the class struggle involves the overthrow of the capitalist class and the establishment of a classless society.

Now let us compare this clearly-defined position with that of the Labour Party. Far from having abandoned their reform programme, they have apparently coined some of the S.P.G.B. phraseology, whilst still attempting to tinker with the effects capitalism—with profiteering, rents, slums, "peace"(!), public utilities—like all the other capitalist and reformist Parties. They call the recognition of the class struggle, "a narrow, class appeal, as all men and women of goodwill should rally . . . . etc." The Labour Party has grown by marrying its old reformist intentions to the unsound ideas of the workers, by studying and manipulating their ignorance. As Mr. Salter, a Labour M.P., has said in the "New Leader":

"There is not a single constituency in the country where there is a majority of convinced Socialist electors. We have plenty of districts, such as Bermondsey, where there is a Labour majority, but it is a delusion to think that the greater number of these people understand what we mean by Socialism. They neither understand it nor want it."

No wonder the shipping magnate, Lord Inchcape, could say of the first Labour Government, "You have no need to dear these people."

Now, since Socialism is necessarily international in character, the question of foreign antagonisms does not arise. Nor is there any question, for the S.P.G.B., of either compensation or confiscation: it is a matter of restitution. Restitution to the workers of the world of the wealth which they alone produce. The records of history will testify that the rise of the capitalist class to power was made in complete disregard of compensation.

Here we have, world-wide, the private ownership of the means of life, and the consequent poverty and insecurity of the workers of the world. The Socialist Party of Great Britain declare that there is one remedy—Socialism—the working class must organise themselves as a class to obtain control of the political machinery (through which social power is wielded), and establish the common ownership and democratic control of the means of life by and in the interest of the whole of human society.
F. E.

The 'F.E'. who wrote the report of the debate for the Standard is 'probably' either Florrie Evans or Frank Evans.

'Robertus' was the pen name of Robert Reynolds. My guess is that he always went by 'Robertus' in the Standard because of issues relating to his employment.

George Henry Loman, speaking on behalf of the Labour Party, was the Labour Party parliamentary candidate for Kingston-Upon-Thames at the 1935 General Election and at the subsequent 1937 by-election for the same seat. There doesn't appear to be much information about him on the internet but Ben Pimlott mentions him in passing in his book, Labour and the Left in 1930s, as someone who was expelled from the Labour Party by its NEC because of his association with Stafford Cripps's United Front campaign in the late 1930s.