An Apostle of Public Ownership (1932) 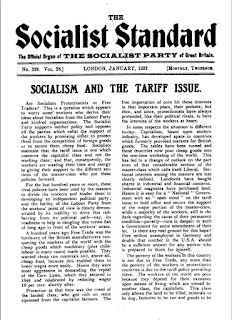 From the January 1932 issue of the Socialist Standard

The Right Hon. Herbert Morrison, the late Minister of Transport in the Labour Government, has been invited by the Soviet Government of Russia to go there and reorganise the passenger transport system. The Daily Herald, in reporting the matter, did not mention whether he accepted the offer. It is a curious commentary, however, on the fact that the Moscow International has for years denounced Ramsay MacDonald and his supporters, while the Russian Government seeks the assistance of one of the most notorious worshippers of MacDonald in Labour Party history.

Herbert Morrison has been very useful here in the Labour Party work of repairing capitalism for the capitalists. Transport is one of the most essential things in the life of great cities. The investing class leave no stone unturned to make it efficient as a profit-making business, whether it is owned privately by shareholders in a company or by stockholders in a municipal or public utility corporation. Political action is one of the methods used by the investors to aid their schemes.

He took charge of the "nefarious" Act of 1924 and worked it so that capitalist organs praised him for his business capacity in smoothing the path of the traffic companies. Before the Labour Government resigned, he brought forward a London Passenger Transport Bill to combine all concerns working London traffic under a so-called public utility Board. Lord Ashfield, of the Combine, told his shareholders that their stock and interest would be more secure under the Labour Bill than their present shares and dividends. The Bill was a part of the usual work of "Labour" in making the present system more efficient and strengthening it—not abolishing it, as Socialists desire.

The Right Honourable ex-Labour Minister gave a lecture at the Workers' Circle, Aldgate, on December 18th, to explain the wonderful scheme of traffic unification. It was a typical company chairman's speech to shareholders. He deplored the number of empty seats in 'buses, and wished to save the waste of perfectly good empty seats and arrange just enough 'buses for the riders. He also explained that the companies could not spend money on improvements while there any possibility of competition. The solution was not Socialism or even Nationalisation. Modern Socialists, he claimed, did not favour State operation of services, but business control through public utility boards. The shareholders of the companies were to be given stock, the directors compensated, and interest would be paid.

The idea was similar to the Port of London Authority, so prominent in opposing dock workers and using machinery to supplant them.

The writer asked Mr. Morrison if he did not describe the "publicly owned" Port of London Authority as a Capitalist Soviet. He was further asked to justify his statement that the workers are to be considered, seeing that out of 34 members of the Advisory Board under his Bill, only three would represent the organised workers.  The capitalist character of the scheme was exposed, but the Right Honourable "Labourer," in reply, "justified" himself by talking about Russia's need for development and capitalist assistance.

The writer never mentioned Russia or the Communists, but this leading light of capitalist reform thought it sufficient to call him a Communist and ignore the subject of his own address.