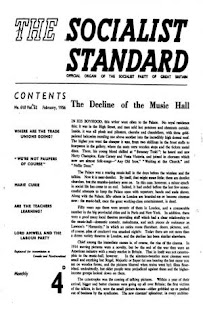 From the February 1956 issue of the Socialist Standard

In his boyhood, this writer went often to the Palace. No royal residence this; it was in the High Street, and men sold hot potatoes and chestnuts outside. Inside, it was all plush and pilasters. cherubs and chandeliers, with three gold-painted balconies receding one above another into the incredibly high domed roof. The higher you went the cheaper it was, from two shillings in the front stalls to fourpence in the gallery, where the seats were wooden steps and the tickets metal discs. There, his young blood chilled at "Sweeney Todd"; heard and saw Harry Champion, Kate Carney and Vesta Victoria, and joined in choruses which now are almost folk-songs—“Any Old Iron," “Waiting at the Church.” and “Nellie Dean."

The Palace was a roaring music-hall in the days before the wireless and the talkies. Now it is near-derelict. By itself, that might mean little: there are derelict churches, but-the mumbo-jumbery goes on. In this case, however, a minor epoch in social life has come to an end. Indeed, it had ended before the last few unsuccessful attempts to keep the Palace open with repertory, bands and nude shows. Along with the Palace, fifty others in London are boarded-up or become cinemas now: the music-hall, once the great working-class entertainment, is dead.

Fifty years ago there were seventy of them in London, and a comparable number in the big provincial cities and in Paris and New York. In addition, there were a good many local theatres providing stuff which had a clear relationship to the music-hall—domestic comedy, melodrama, and such pieces de resistance as Lawson’s “Humanity," in which an entire room (furniture, doors, pictures, and, of course, piles of crockery) was smashed nightly. Today there are not more than a dozen variety theatres in London, and the decline has been similar elsewhere.

Chief among the immediate causes is, of course, the rise of the cinema. In 1914 moving pictures were a novelty, but by the end of the war they were an American industry with a ready market in Britain. That in itself was not catastrophic to the music-hall, however. In the nineteen-twenties most cinemas were small and anything but Regal, Majestic or Super (at one bearing the last name you sat on wooden forms, and the pictures blurred when trains went by), films flourished. undoubtedly, but older people were prejudiced against them and the higher-income groups looked down on them.

The catastrophe was the coming of talking pictures. Within a year of their arrival, bigger and better cinemas were going up all over Britain; the first victims of the talkies, in fact, were the small picture-houses—either gobbled up or pushed out of business by the syndicates. The new cinemas’ splendour, in every architectural style from Byzantine to Classical Revival, put the old Palace in the shade. And admission was cheap: bear in mind that talkies arrived in Britain in 1929, at the beginning of the slump. Mass unemployment may have contributed a great deal to cinema-addiction. For threepence or fourpence you could not merely buy a dream; you could sit for several hours in warmth and comfort (some cinemas even gave cups of tea in the afternoons).

The reasons for the music-hall's decay go deeper, however. The appearance of a new social pursuit does not necessarily mean the decline of another. It may be an addition, not an alternative. The rise of television, for example, has not ousted the cinema, which in 1955 showed increases in admissions and takings over previous years. What has passed is not a form of entertainment but the social pattern of which it was part—the sort of life which produced music-halls and the social consciousness which was expressed in them.

The music-hall was not an off-shoot of the theatre: it had different roots and a different function. It originated simply as tavern entertainment, the singing of cheerful songs with choruses for everyone to join in. Because public houses were centres of social life, popular entertainment remained in them; the more so since the upper class made “serious” music and the theatre its own amusements. Thus developed the “free-and-easy,” where a chairman gave order to the proceedings but they remained an accompaniment to eating and drinking.

The music-hall as such began when public houses made special accommodation for entertainment—"saloon theatres,” where the audience ate, drank and smoked through it all. In the mid-nineteenth century there were frequent prosecutions for presenting bits of drama and opera, those being outside the licensed province of the saloons; when the restrictions and prosecutions ended, music-halls on the theatre pattern began to be built. Most music-hall buildings date from between 1880 and 1900.
In one sense, the decline of the music-hall could be said to have begun then, with the setting-up of the foot-light barrier and the performers becoming highly-paid artistes. In fact, however, the old traditions persisted. There was still a lot of drinking in music-halls, though it had to be done outside the auditorium (according to accounts, the appearance of a weak turn would provoke a wholesale exodus to the bars); conviviality remained the keynote, and performers used the same material for years, knowing that their audiences expected and wanted to join in long-familiar songs.

The essence of the music-hall was what the modern entertainments industry calls “audience participation.” That was not merely a matter of singing choruses and shouting responses; it involved the whole of the music-hall’s material. The performers had the same working-class background as the audiences (respectable people 60 years ago would rarely let their sons and daughters go on the ordinary stage, let alone the music-halls): Harry Champion was not a man who “did” Cockney songs but a real, raucous, Cockney-speaking Cockney. Their humour was less devised than distilled from everyday life in pub, street and kitchen; so, too, their sentiment.

Neither the humour nor the sentiment goes down today, of course. Both came from a recognition of common (often earthy) joys and misfortunes. Albert Chevalier personating the old man rescued from the workhouse and singing “My Old Dutch ” brought tears to the eyes of strong men—because the separation of husband from wife in the workhouse was all too often the fate of the old. Something similar can be said of almost every music-hall song. They celebrated food and drink, made wry humour out of nagging wives and perfidious husbands, were sentimental over illness, absence and death.

For various reasons, that background faded and when it had happened the music-hall was dead. The State assumed more and more responsibility for children, the ill and the old. Popular newspapers and magazines pushed ideas of genteelness at the newly board-school taught public; the man who had met his doom at Trinity Church kept quiet about it. And beer-drinking diminished, as public houses ceased to be centres of social life; with it, the scenes and episodes which were its consequences.

The decline of the music-hall is part of the disintegration of community life which has taken place in this century. There is nothing communal about the cinema: everybodv comes in and goes out at a different time from everybody else, appreciation is individual, and the performance goes on regardless of the audience's response. A good many people, in fact, scarcely go to see the film at all (at least one cinema in East London before the war had double seats for the amorously inclined). The cinema is entertainment for a society congested with lonely individuals, where life is too split-up and “private" to allow either the communal enjovment or the common recognition of poverty and misfortune from which the music-hall drew its vigour.

Mention is often made of a seeming loss of vitality from everyday life in the last 25 or 30 years. George Orwell, in “The Road to Wigan Pier,” refers to a “Punch” cartoon of the nineteenth century in which a bunch of street-boys are saying: “ 'Ere comes a swell! Let's frighten 'is ’oss!” and comments that nowadays “they would be much likelier to hang round in vague hopes of a tip.” The music-hall of not so many years ago would provide much more food for that contention, when the audiences were uninhibited in their reactions to performers. The writer once heard a character actor break off a Shakespeare declamation to say: “Yes, and if I come up there you won’t be so — clever, my lad!”

The real point, however, is that so much of former communal activity and responsibility for living has now been handed over to authority-bearing specialists. It used to be the poor that helped the poor: now it is the State. Similarly, former objects of common concern, sentiment and indignation are now the subjects of State ministration. “Standing up for one’s rights” nowadays means writing letters of complaint to the right quarters.

It is too easily taken for granted that the days of the music-hall were “bad old days” (except by those who assume the very opposite because “a pound was a pound,” as if everyone really did have five times as much money before 1914). Obviously there is not much to be said for drunkenness, street fights and so on that were common sights, and still less to be said for the workhouse system of those days. What is overlooked is that the breaking-up of community life has created different sorts of problems. A good deal is heard today about the increase in incidence of mental and nervous diseases, but few people ask why it is happening.

One reason, at least, is that the atomizing of social life frustrates one of man’s greatest needs—for recognition and acceptance by his fellows. Twentieth-century civilization is an unsatisfactory world for most of the people in it, largely for that reason. In spite of the mechanization of work and leisure, neither gives much satisfaction to most men and women: the mass frustration and lack of fulfilment implicit in 99 out of a 100 films and novels is itself a condemnation of modem civilization.

The first object of social organization is the satisfaction of people’s needs: that is what first brought men out of caves and trees to form tribes and communities. Our society does not do that. Indeed, it does not aim at doing it: it places sale and profit above all other things, and makes commodities of the means of satisfying needs. The world represented by the music-hall had many undesirable features: because ours is in some ways different, that does not mean it is in many ways better.
Robert Barltrop
Posted by Imposs1904 at 4:26 PM