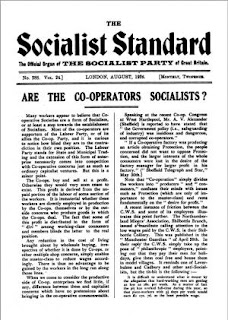 From the August 1928 issue of the Socialist Standard

In the July issue of the “Commune,” the editor, Mr. Guy Aldred, writes on the subject of his opposition to the S.P.G.B. In doing so, he makes the statement that the S.P.G.B. refuses to debate with him. This is false, and Mr. Aldred knows it to be so.

He knows quite well that our platform at all our ordinary propaganda meetings is open to him, as to any other opponent of Socialism, to state his case and oppose ours. We cannot admit Mr. Aldred’s claim to greater consideration than this. We cannot, for instance, allow him or any other opponent to dictate to us that we shall go to the expense of engaging a hall expressly to provide publicity for him. If we considered Mr. Guy Aldred’s activities of sufficient importance to warrant this we should do it. We are always willing to debate with our opponents, but we, not they, will decide whether any particular opponent is of sufficient importance to justify special attention of the kind Mr. Aldred demands.

In the same issue Mr. Aldred denounces the holding of set debates such as the recent debate with Mr. Maxton, on the ground that the audience are debarred from participating. This is true, but the reason is obvious. If two opposing political parties are going to cover fully the differences between them, time does not permit of a full debate, and in addition questions and discussion from an audience of several thousand people. At our ordinary propaganda meetings this difficulty does not exist and questions and discussion and opposition are unrestricted. And as Mr. Aldred abhors set debates of this kind, why does he complain because of our refusal to arrange such a set debate with him? Mr. Aldred has also discovered an acid test by which to prove that our principles are unsound. He finds that we referred to Mr. Maxton as “Mr.," instead of calling him “Comrade” or “Maxton” or “Jimmy" or just plain James. This he says is “obsequious.” We do not know whether Mr. Aldred will be indignant or flattered that we are equally “obsequious" to him. It is, moreover, distressing to see that Mr. Aldred is equally “obsequious.” The same issue of the “Commune” contains a reference to "The Earl of Birkenhead.” Why not plain  "Birkenhead” or F. E. Smith?

Do you not think, Mr. Aldred, that it is really rather childish to attack the principles of a Party on such trivialities, as these?

In 1906 Mr. Aldred (although we used that fatal "Mr.” even then) wrote telling us that he accepted "the revolutionary principles ” of the S.P.G.B. and was leaving the S.D.F. and proposed to join us if we would accept him. A few days later he changed his mind and decided to remain in the S.D.F. in order to “use the S.D.F. platform for placing before members” his “revolutionary ideas.” The letters were published in full in the ”Socialist Standard” for November, 1906.

We only mention this because, after a lapse of 22 years, one of Mr. Aldred’s supporters, claiming to speak on his behalf, now denies the authenticity of the letters. As Mr. Aldred has never informed us that he questions their authenticity, this supporter of his is obviously lying when he claims Aldred’s endorsement of his action.

Various other criticisms of the S.P.G.B. by Mr. Aldred will be dealt with in a subsequent issue.


Blogger's Note:
A report of the SPGB's debate with James Maxton can be read at the following link.