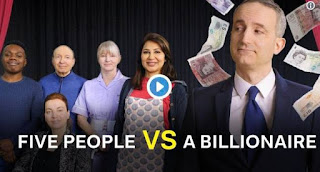 Video Review from the July 2019 issue of the Socialist Standard

For the 2019 local elections, the Labour Party released a video claiming ‘It’s just common sense.’ The video was entitled ‘Five people verses a billionaire’ (see: LINK.). Shares on social media proclaimed the video to be a better education in economics than most university classes.

The video depicts the difference between ‘giving’ money to ordinary people, via a pay-rise, a pension, disability benefits or a small business loan with giving the equivalent amount to a billionaire in the form of a tax cut.

The video then depicts all the five people spending their extra money, generating more business, economic growth and higher tax returns in their area: essentially, making the argument for a multiplier effect, whereby increasing consumer resources generates more wealth than would be spent in pay pensions and benefits.

The video asks the billionaire what they did with their money, and tellingly, he airily declares he forgot about it, but will probably send it to the Cayman Islands with the rest.

There are many problems with this short video. Firstly, the idea that economic growth is driven simply by having more commodity exchanges on the market. Circulating the wealth faster and faster does not create new wealth. Stimulating ‘demand’ by making more money available only generates growth if more wealth is produced to increase supply. Capitalist firms could just raise prices to capture more of this new demand, rather than increase production.

It neglects that the money to pay pay-rises, pensions and benefits has to come from somewhere. Of course, many Corbynistas argue for Modern Monetary Theory (MMT) which says that money can just be created out of thin air (much like the old social credit fantasists of the 1930s). Money not backed by real wealth, though, is just tokens. Government must lay a claim to a share of the wealth that has already been produced in order to have tax money to spend.

A government can theoretically tax any existing wealth: all it needs to do is identify the source of wealth and apply force to claim control of it. The only limit to expropriation is the need for political support to be maintained for the government and the operational efficiency of the laws and bureaucracy of the nation.

Expropriation of wealth and monetising it can increase the value realised in an economy, in the form of windfall profits. A modern government could raid hidden pots of wealth, but this would take money out of the capital cycle which would disrupt the economy, and, at the least, be unpopular (if not actively counter-productive). Governments in a capitalist economy can only tax new wealth, to take a share of the profits generated, if they want to be sustainable. That is, they can only tax within the limits of profitability.

If the tax rates are too high, then investors will be deterred from turning their wealth into capital, and an economic crisis would ensue. The threat of a capital strike is an effective tool for the masters in the class war, and one that is largely hidden as a ‘natural’ fact, rather than a social act of self-interest. Labour’s video fails to expose this, instead simply conveying that billionaires naturally hoard wealth, rather than dutifully spending it.

Any spending done with tax will return less in new profits than the sum extracted from profits through taxation (because any of that spending will have to give a share to wages or paying for capital invested already in goods and services).

The government could instead borrow money from the wealthy, this, however, acts in much the same way as taxation, directing wealth away from the capital investment cycle, and reducing the production of new output. It further adds to the capitalists’ control over the economy, since the state is now committed to paying them back, and it can only carry out policies that will securely honour its debts.

In the specific instance of where the capitalist (the billionaire) would prefer to export their wealth rather than spend it in the country, taking this money and spending it would increase the sum of domestic demand. However, the reason the billionaire would be declining to invest and instead export their wealth is because there isn’t enough profit in the market to induce them to invest in new production. Taxing the profits of the billionaire reduces rather than increases their incentive to invest.

This is just a return to the Keynesian fantasy that the economy can be ‘pump-primed’ by taking idle wealth that is uninvested, and turning it into consumer demand. Even worse, it is the mirror image of the Tory line that a ‘well-managed economy is vital to the delivery of public services’ (i.e. that stringent government restraint to allow firms to grow leads to tax revenue and money to spend on services).

In both cases, human need is subsumed to the need to successfully exchange commodities in a market place. They both rely on a systemic logic that puts the owners of commodities in first place within the economy, and makes everyone else dependent upon fulfilling their interests. Put another way, for all the radicals proclaiming Labour finally coming out in favour of the ‘multiplier effect’, this video radically disarms the electorate, and the working class.

The knowledge that wealth is produced by our labour, and the interests of the property owners hinder it being put to the service of our needs leads to a very different set of conclusions: that we need to take ownership of the productive wealth for ourselves, and bypass the market entirely.

The propaganda of the Labour Party under Corbyn is as much a barrier to spreading the message needed for working class self-emancipation as it ever was under Blair. The Labour Party, far from progressing the interests of the working class, is about trying to use state power to make the market work in favour of people, and that is like trying to put a mad bear to work in a shop.
Pik Smeet

It's no good to dismiss the multiplier as a Keynesian fantasy as it has the rather important merit of having been empirically validated. The problem with the video is not the neo-Marxian critique (which is not empirical and not scientific) but that the multiplier is only powerful when the economy is depressed (eg after 2008) and not when it is close to full capacity.

The Keynesian multiplier has been (sort of) put into practice many times, and as you mention, has never succeeded in ending the boom bust cycle of capitalism. It has succeeded in stoking inflation and interest rates, though. It gives the appearance of new economic growth by essentially borrowing from future investment.

At a surface level, it does activate under used resources, but that is at the expense of future capital accumulation. It is based on the idea that capitalists are deterred by "Animal Spirits" from investing, and that there is under-consumption in the economy. However, the resulting inflation, raised taxes and interest rates will deter investment in future.

Spinning a fantasy that the economy would be alright if only more money was being spent disarms the working class, whose labour produces all those profits in the first place, and whose exploitation lies at the real heart of any crisis.