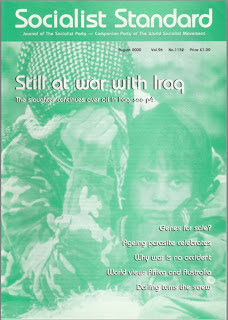 The Voice From The Back Column from the August 2000 issue of the Socialist Standard
Censorship
One of capitalism’s inherent contradictions/conflicts is being sharpened to killing point by the rapid development of the Internet: that of freedom of information versus privacy. Our freedom as individuals to find out facts about commercial companies and government is counterbalanced by their freedom to find out (and share) facts about us. “An entire new technical architecture to facilitate e-commerce is being created . . . ready to be grafted on to the older, libertarian architecture of the net. And therein lies the danger . . . the values implicit in the architecture of this new layer will be radically different from those implicit in the old one. The key difference will be that the new layer will use the technical facilities of the old layer to eliminate anonymity and erode privacy . . . Within such an architecture, the practice of anonymous reading—one of the great bulwarks of intellectual freedom—could be rendered impossible, at least in relation to online documents.” Index on Censorship, March.
Pirates
Hundreds of merchant seaman are attacked, and several killed, by pirates each year as hard-pressed shipping companies cut back on staff and security. The wave of modern piracy has grown threefold over the past decade, leaving Britain’s merchant seamen feeling let down by the Government and their employers . . . Seamen and maritime experts blame the economics of shipping . . . Cargoes such as oil, sugar or aluminium bars are easily unloaded and their origins disguised in Far Eastern ports, notably China. Financial losses are covered by insurers. Financial Mail on Sunday, 11 June.
Blood money
When this Labour Government was returned to power an inexplicable euphoria seemed to grip the British media. Supporters of Labour were soon delighting in religious-type mantras: “Education, education, education,” “Tough on crime, tough on the causes of crime.” Perhaps the most unrealistic piece of garbage was the news that the British Foreign Office was overturning centuries of ruthless cynicism and adopting an “ethical foreign policy”. What is the reality behind this sham? “Officials from dozens of the world’s most repressive regimes have been invited by the Government to view and buy high-powered military equipment at Farnborough Air Show next month. Many will have a significant proportion of the expenses of their trips paid by taxpayers the UK defence Export Sales Organisation” (Observer, 11 June). So welcome Indonesia, Pakistan, Kuwait, Saudi Arabia and any other repressive dictatorship—come and buy. Ignore the nonsense of “ethics”; that is only cant produced for the gullible. After all, the arms trade is worth £5 billion a year to British capitalism.
TV Times
So it’s no surprise that new research from the University of Essex shows that in the last 30 years, the average person has gained only 20 minutes’ extra free time each day. That’s about a TV half-hour. So what are you going to send that extra leisure time watching? TV Times, 15-21 April.
The cold facts
Capitalism is a cruel social system. Based as it is on the profit motive, we expect it to ignore social needs if they conflict with that of profit. All workers suffer from its madness, but the old and the infirm seem to be its worst victims: “Lord Whitty, Environment minister, said yesterday that an estimated 4.3 million households in England were living in cold, damp and health-hazardous conditions. Around 30,000 winter deaths, mainly among elderly or disabled people and children, are linked with ‘fuel poverty’.” Times, 10 June.
The dignity of labour?
An article in the Times (7 June) reveals just how widespread the Big Brother role is today: “All the same, it is worth remembering that if you are working on a computer (and who isn’t these days?) then keeping tabs on what you are up to is an easy matter for an employer—and it doesn’t stop at monitoring Internet use or snooping at e-mail. Did you know that, in addition, seven out of ten employers routinely watch their staff through CCTV systems and/or covert surveillance systems? Even if you are not caught on camera pinching anything from the stationery cupboard, advanced in technology mean that your company can still monitor what you are up to. Computer programmes are available that will log your every key stroke—including the time, frequency and speed. That means your boss can glean a complete picture of your productivity, work rate and the amount of time you spend away from the keyboard.” And to think that George Orwell’s 1984 used to be looked upon as a work of science fantasy.

That's all of the August 2000 issue of the Socialist Standard on the blog.

Apologies for the recent infrequency on the blog. My laptop really is on its last legs.