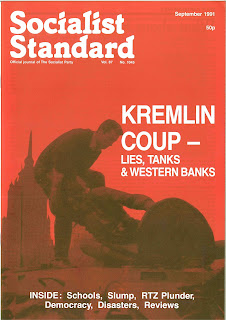 Editorial from the September 1991 issue of the Socialist Standard

In 1917 the Bolsheviks seized power in Russia by a coup d'état. In the elections to the Constituent Assembly early the next year a majority of voters opted for the other parties. So the Bolsheviks sent troops to close down the elected Assembly. The tactics of Bolshevism were the tactics of a ruthless left-wing fascism, contemptuous in every way of the will of the majority.

The Bolsheviks smashed the opposition parties and closed the press of their critics. The Cheka was set up to persecute those who stood against the Bolshevik state dictatorship. All of this happened under Lenin, the leader of the Bolsheviks. Under his second-in-command, Trotsky, the sailors of Kronstadt who dared to reject the authoritarian dictatorship were massacred. The fascistic nature of the regime cannot be blamed upon the singular wickedness of Stalin who succeeded Lenin as party chief. The apparatus of oppression was built into a regime established by minority coup.

The myth of Russian socialism has been the most grotesque political illusion of this century. Opponents of working-class freedom have used the example of the Bolshevik coup and its appalling consequences as proof that "socialism" must lead to dictatorship. The parties and sects of the Left, who have danced like puppets to the tunes of the Kremlin dictators, and have confused workers with nonsensical notions of "Marxism-Leninism", have dragged the idea of socialism through the mud.

The Socialist Party has pointed out since 1917 that Russia was creating state capitalism, not socialism. It is a system based upon state dictatorship, not common ownership and democratic control.

The beneficiaries of the Leninist governments have been the bureaucratic elites who have enjoyed much the same affluence and privilege as the capitalist masters in the openly capitalist countries. These Party bosses hate to see workers combining, whether in independent unions or for freedom to assemble or publish ideas or vote for who is to have power.

In 1981 the Polish Party bosses, backed by the Leninist super-bosses in the Kremlin, used military force to crush the independent union, Solidarity, and attempted to restore their unimpeded dictatorship. They failed. Once workers had a taste of democracy, however limited, there is no chance of stopping them from going for more.

In 1991 the Party bosses of the CPSU have orchestrated a coup to restore full state power to themselves. They feared that nationalist and other factions would break their monopoly of power. The Red Fascists of the KGB, the Red Army and Party officialdom have tried to repeat the tactic of 1917: take power regardless of the electoral will of the workers.

The democratic concessions which the workers of the Russian Empire have won over the past half-decade will not be surrendered without a struggle. When workers defend their freedom to assemble and to print literature and to vote, the Red Fascists will try to use violent force against them.

The Socialist Party is hostile to the state capitalism of the Russian Empire (as well as China and the other pseudo-socialist nations) and also to the private capitalism of Bush's "New World Order" where millions dwell in poverty and anxiety. We call upon our fellow workers to join the movement for a truly democratic society without classes, states or leaders. The movement for socialism must be conducted democratically or else it can not be socialist; it must stand for a society of free access to all goods and services, and nothing less, or else it is not proposing an alternative to capitalism. Workers of the Russian Empire—workers of Britain—workers of the world—let us avoid further bloodshed and oppression; let us take the world into our own hands.

Not a particularly good editorial, if truth be told. Too much use of the 'f' word, which is rather silly, and there's no need to perpetuate myth that the SPGB denounced the Bolsheviks as soon as they heard the latter had stormed the gates of the Winter Palace. The SPGB's analysis of the Russian Revolution is far more thought out and intellectually solid than that.