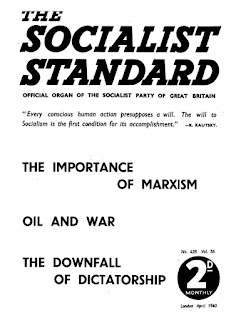 From the April 1940 issue of the Socialist Standard

Even the most cursory of observers will have noticed of late a growing interest on the part of the workers in political and economic problems. This increase of interest has reflected itself in an enthusiastic response to our propaganda. Our speakers meet with attentive and appreciative audiences, and the influence of our Party is now greater than ever. There is an obvious reason for all this. The average worker can no longer find his bearings in the modern world, which he sees ravaged by wars and strife, persecution, bestiality, poverty and unemployment. As a consequence his outlook has become gloomy, for his hopes and aspirations have been destroyed by the march of events. A restatement of the essentials of Marxism is therefore timely, for Marxism demonstrates the transitory character of our present system. Not only doe sit explain the world in which we live, but it also points the way to a better and brighter future.

What we owe to Marx
The Socialist movement is indebted to Marx for two important discoveries—the materialist conception of history, and the source of surplus value. Both discoveries have established a scientific basis for our cause, and have thus marked us off completely from Utopians, moralists and reformers. Yet, when appraising Marx, one must not overlook the fact that he built upon the work of his predecessors. Marx had already obtained a storehouse of information from English economists, Utopian Socialists and German philosophers, when his own keen analytical mind formulated the doctrines which have been mentioned above.

What is a Materialist?
Quite a number of people have a curious conception of a materialist. The latter appears to them as a vulgar person, devoid of aesthetic appreciation and oblivious of the finer things of life. Nothing could be more absurd. On the other hand, many believe that a materialist is one who dissolves the world into a heap of dead atoms and denies the existence of the mind (Ernst Haeckel, for example). This confusion has prompted Mr. G. D. H. Cole to suggest, in his work, "What Marx Really Meant," that one ought to designate Marx's theory by another name—"Realistic Interpretation of History." Marx had, however, a very good reason for choosing his own particular appellation. In the days when his conception was being formulated a fierce controversy had been going on between two rival philosophical schools of thought. The men who held that Nature had preceded mind or the idea called themselves materialists, and their philosophy materialism. Conversely, the others who believed in the priority of the idea named themselves idealists, and their philosophy idealism. The idealist position leads to God. To the materialist Nature is all that is, and God is a figment of the human imagination. In short, a materialist is a person who contends that ideas are inseparable from human beings, who are products of nature at a certain stage of development. The entire teachings of natural science have demonstrated  the correctness of this philosophical outlook.

Materialist Conception of History
Throughout the centuries historians have recorded the private lives of kings, the adventures of sea captains and the feuds between various religious groups. Consequently history has appeared as a crazy quilt, an endless jumble of perpetually recurring struggles for liberty and justice, which, somehow or other, are never permanently realised. In contra-distinction to this confused romanticism, Marx maintain that the essential factor in all history is the way in which mankind has obtained its livelihood. For, as he quite rightly says, before men can devote themselves either to politics, religion or science, they have got to eat, drink and sleep. And how do men obtain their means of subsistence? With the aid of tools, for man is a tool-making animal. The millions of inventions that have taken place since primitive man's discovery of fire have led to the giant machines that we know to-day. In the 1888 Preface to the Communist Manifesto, Frederick Engels has summarised historical materialism in the following words:

" . . . That in every historical epoch, the prevailing mode of economic production and exchange, and the social organisation necessarily following from it, form the basis upon which is built up, and from which alone can be explained. the political and intellectual history of that epoch; that consequently the whole history of mankind (since the dissolution of primitive tribal society, holding land in common ownership) has been a history of class struggles, contests between exploiting and exploited, ruling and oppressed classes; that the history of these class struggles form a series of a evolutions in which, nowadays, a stage has been reached where the exploited and oppressed class—the proletariat—cannot attain its emancipation from the sway of the exploiting and ruling class—the bourgeoisie—without, at the same time, and once and for all, emancipating society at large from all exploitation, oppression, class distinctions and class struggles."

What a panorama this conception opens up to us! "Freeman and slave, patrician and plebeian, lord and serf, guildmaster and journeyman, in a word, oppressor and oppressed, stood in constant opposition to one another, carried on an uninterrupted, now hidden, now open, fight, a fight that each time ended either in a revolutionary reconstruction of society at large or in the common ruin of the contending classes.


"In the earlier epochs of history we find almost everywhere a complicated arrangement of society into various orders, a manifold gradation of social rank. In ancient Rome we have patricians, knights, plebeians, slaves; in the Middle Ages, feudal lords, vassals, guildmasters, journeymen, apprentices, serf; in almost all of these classes, again, subordinate gradations.  "The modern bourgeois society that has sprouted from the ruins of feudal society has not done away with class antagonisms. It has but established new classes, new conditions of oppression, new forms of struggle in place of the old ones. "Our epoch, the epoch of the bourgeoisie, possesses, however, this distinctive feature: it has simplified the class antagonisms. Society as a whole is more and more splitting up into two great hostile camps, into two great classes directly facing each other: Bourgeoisie and Proletariat.” (Communist Manifesto, p. 8, Reeves Edition.)

And why has society been divided into classes? In “Socialism, Utopian and Scientific,” Engels has supplied the answer: —

“ . . : The separation of society into an exploiting and an exploited class, a ruling and an oppressed class, was a necessary consequence of the deficient and restricted development of production in former times. So long as the total social labour only yields a produce which but slightly exceeds that barely necessary for the existence of all; so long, therefore, as labour engages all or almost all the time of the great majority of the members of society . . .  so long, of necessity, this society is divided into classes. Side by side with the great majority, exclusively bond slaves to labour, arises a class freed from directly productive labour, which looks after the general affairs of society; the direction of labour, State business, law, science, art, etc. It is, therefore, the law of division of labour that lies at the basis of the division into classes.” ("Socialism, Utopian and Scientific,” p. 77, Swan & Sonnenschein Ed.)

Would that space permitted me to quote more from these masterly pamphlets! They are unquestionably classics of Socialist literature!

Some Illustrations off the Theory
One can illustrate historical materialism by a multitude of examples. Let us take three outstanding ones:—

(1) The rise of Christianity. In the days when this doctrine arose society was more or less based on slave labour. This form of labour leads to an exhaustion of the productive forces, for the slave recognises his inferior position and vents his spleen on the tools he works with. So long as supplies of slaves were plentiful (through conquest, etc.) the ruling class of Rome cared very little indeed for their chattels. Ruthlessly exploited, ill-treated, his mentality circumscribed by his miserable mode of life, is it to be wondered at that the slave longed for death, or at least for a Messiah who would relieve him of his burdens? For chattel slave labour does not provide the basis for a higher order of society. A Socialist solution of man’s economic problem on this planet was not only impossible but also inconceivable in Rome at that period. For the free men, however, who were disgusted with the striking contrasts between the classes, the only practical escape was a sharing of goods in common. The early Christian Congregation was an organisation of this character. This has led many to believe that Jesus was a Socialist. Apart from the fact that the historicity of Christ has been questioned, the communism of the primitive church was a communism of consumption, not of production. Christianity, confined at first to small congregations, very soon took root in a society which was heading towards the abyss. With the infiltration of wealthy elements the communism of consumption degenerated into philanthropy.

(2) The French Revolution. We are all familiar with the slogans of the Revolution—liberty, fraternity, equality. These were the catch-words of the rising bourgeoisie of France intent on the overthrow of absolute monarchy, the last bulwark of the feudal order. For centuries prior to 1789 the growing capitalist class of France had found themselves hindered by feudal restrictions on their commerce and industry. The extravagances of the monarchs had also dragged the peasants deep into the mire. The bourgeois intellectuals were the most advanced group in this complex society, and it was their initiative, combined with the backing of the lower orders, which finally destroyed feudalism in the great revolution.

(3) The Present War. The present conflict in Europe has been described by the British as a war for democracy and freedom, by the Nazis as a struggle for Socialism against Jewish plutocracy. Millions of people on either side earnestly believe that this is the case. In reality the war is a violent expression of an economic conflict between rival groups of capitalists for a re-division of the plunder filched from the workers. The British and French capitalists own between them territory of nearly eighteen million square miles, with a population of more than six hundred and eight millions. The German bourgeoisie, deprived of their colonial possessions after their defeat in the last great war, find themselves confronted with tremendous economic difficulties. Possessing a vast industrial plant and an enormous proletariat ready for exploitation, their main problem is cheap raw materials and a market for their goods. As the British and French capitalists have already cornered what the German bourgeoisie so eagerly desire, the latter are attempting to take by force what their enemies are not prepared to yield. It is this German threat to the possessions of the British and French capitalists which is the root cause of the present war.

Limitations of the Theory
Many carping critics have complained that Marx's theory is much too general. They have expected from it either a detailed account of every man's doings in the past, or the final answer to all the world's riddles.

Marx, however, does not envisage his conception in that light. For him, as for us, it is a scientific method of interpreting historical events. Moreover, that the materialist conception does really interpret history has been amply demonstrated by the use that has been made of it since Marx's day. One need only mention some well-known historians who have employed the method -- Kautsky, Mehring, Ashley, Townsend, De Gibbin, Tawney, Rogers, Jenks.

Historical Materialism is, however, only the one aspect of Marxism. It is complemented by the concept of surplus value—a theory which reveals the mechanism of capitalist production. We reserve a discussion on this subject for a further article.
Solomon Goldstein