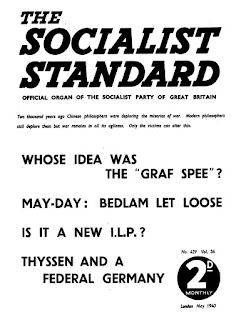 From the May 1940 issue of the Socialist Standard

In last month's Socialist Standard we dealt in some detail with Marx's important discovery—the materialist conception of history. We showed that this conception was a scientific guide to the interpretation of historical events. In the light of this discovery, capitalism is depicted as a passing phase of social development and Socialists as pioneers of a new and more progressive order of society. This primary aspect of Marxism does not, however, exhaust the range of "Scientific Socialism." The extremely complicated internal structure of capitalism stands also in need of analysis, for unless we understand the working of this mechanism our demand for a Socialist society can rest only on historical foundations. It is Marx’s complementary discoveries in the realm of political economy that have ranked Socialist theory as an economic as well as an historical science.

Introduction
If the reader were to take a bird's eye view of our present economic system he would see it as an intricate network of establishments embracing industry, commerce, finance, law and social administration. Having thus surveyed capitalism, the first question that would most probably occur to his mind would be, " How does such an involved structure keep intact?" or, to express the same point in the language of economics, “What are the economic laws of this mechanism?" This very question may be said to be the subject matter of inquiry of Political Economy, the science that deals with the nature of wealth and the laws that govern its production and distribution. As Marx's concept of value and surplus value can really only be clearly understood when viewed in relation to Political Economy, it is desirable for us to consider the aim, scope and historical background of that science. By presenting the subject in this manner we shall enable the reader to more readily grasp the full import of Marx's economic discoveries.

Theory of Value
The central theme of Political Economy is the theory of value—a theory intended to solve the riddle of what it is that determines price. Why, for instance, should a diamond generally cost more than a hat, or a jeweller receive a higher price for his services than does an agricultural labourer? Problems like these have occupied the attention of economists for centuries.

There is one proposition, however, upon which practically all economists, prior to and contemporary with Marx, have been in agreement, viz., That the average price of an article is regulated by a certain standard, which may be called the article's real value. As a matter of fact, all of us in our daily experience recognise such a standard, for we frequently use the expression "value" in an economic sense during current conversation. We often say, for example, "I've paid more for this article than it's really worth," or conversely, “I've received splendid value for money."

Current Theories of Value
If the reader were to ask the Economic League what determines the value of a commodity he would meet with a reply we have so often received, viz., The value of an article is what it will fetch.

The Economic League are not the only ones to advance this proposition.

The columns of the Catholic Herald have contained a similar thesis in an article devoted to refuting Marxism.

Samuel Butler put it forward in verse in his work " Hudibras," more than two centuries ago, when he wrote: —

“The value of a thing
Is just as much as it will bring."

There may be some justifiable excuse for Samuel Butler and the Catholic Heralds but not so for our modern economists, whose reply surely begs the very question that was raised.

For what a thing will fetch is neither more nor less than its price! Value and price must therefore be considered identical.

But, then, the question still arises, “What determines this value or price?" Does the Economic League think there is any determinant? If not let them explain why a house costs more than a loaf of bread.

Let us leave this fallacy and turn our attention to a much more widespread but equally mistaken notion—the view that supply and demand determine the value or price of an article. In this connection one thing is quite true. If the supply of goods exceeds the demand for them market prices will fall; conversely, where demand exceeds supply (instance torches to-day) market prices will rise.

But let us assume a case where supply and demand are equal.

For example: There are six customers in a shop, each of whom, shall we say, demands a tin of biscuits, and the shopkeeper has precisely six tins of biscuits to sell. What happens in these circumstances ?

Will the shopkeeper charge no price for his wares, just because supply and demand happen to be equal—or will he possibly ask one of his customers to walk out of the shop so as to enable him to fix a price?

Finally, let us not omit a reference to the theory of marginal utility.

It would take us too far afield to enter into all the manifold aspects of this modern bourgeois theory, so it must suffice to point out the following:—

Utility, whether marginal or otherwise, cannot possibly serve as an indication of the magnitude of value, for utility itself cannot be measured.
How are we to ascertain, for example, how much more utility there is contained in a diamond than there is in a roll and butter ?

Moreover, quite apart from being an objective measure of value, utility cannot even serve as a subjective measure of value for the capitalist. For it is precisely because the goods his workers have produced are absolutely useless to the capitalist personally that he exchanges them for money. In fact, the ironical part about it all is that their only use value is to him their exchangeable value. And this conclusion alone would lead us to reverse the notion that attributes the exchange-value of an article to its use-value, which is the essence of the theory of marginal utility. Moreover, bootlaces are certainly much more useful than battleships (at any rate, in peace time!), but to the best of my knowledge they have never commanded a higher price. An objection may be here raised that I have merely emphasised one aspect of the theory of marginal utility. I am aware of the fact that there are various schools of thought on the question—that there are some who interpret marginal utility to mean “final demand" and others who include in their idea of utility the concept of “cost of production." These points, however, have already been met in other sections of the article.
Man on Value
According to Marx . . .

That which determines the magnitude of the value of any article is the amount of labour socially necessary, or the labour-time socially necessary for its production. . . . As values, all commodities are only definite masses of congealed labour-time. — (“Capital,” Vol. I, page 46, Modern Library Edition.)

On the same page he says: —

The labour-time socially necessary is that required to produce an article under the normal conditions of production, and with the average degree of skill and intensity prevalent at the time.”

He then gives the following example of the theory: —

Diamonds are of very rare occurrence on the earth’s surface, and hence their discovery costs, on an average, a great deal of labour time. Consequently much labour is represented in a small compass . . . If we could succeed, at a small expenditure of labour, in converting carbon into diamonds, their value might fall below that of bricks.” (Page 47.)

We shall elaborate on this labour theory of value in a later article. Here we wish to draw attention to the formulation of this concept by economists before Marx—to the evolution of the theory, so to speak.

The Labour Theory of Value Before Marx
One of the first to grapple with the problem of value was Sir William Petty (1623-1687), Governor- General of Ireland. Petty has been called “the father of Economic Science." In his “A Treatise on Taxes and Contributions," written in 1662, he says: —

If a man can bring to London an ounce of silver out of the earth in Peru in the same time that he can produce a bushel of corn, then one is the natural price of the other. Now if by reason of new and more easy mines a man can get two ounces of silver as easily as he formerly did one, then corn will be as cheap at ten shillings the bushel, as it was before at five shillings. (P. 43, Cambridge Edition.)
Labour is the father and active principle of wealth as lands are the mother. (P. 68.)

The value of the average daily wage is determined by what the worker needs—so as to live, labour and generate. (P. 60, “Political Anatomy of Ireland,” British Museum Copy.)

Petty was not, however, always consistent in his views. He laboured to a considerable extent under the Mercantilist illusions of his day—the view that only money had any real value. Expositors of the labour theory of value were also Benjamin Franklin (1706-1790) and Richard Cantillon (died 1734), but their views, like Petty’s, were vitiated by Mercantilist notions, which were more or less an expression of the interests of the rising merchant capitalists.

The Mercantilist economists were succeeded in the order of time by the “Physiocrats," the French school of Political Economy. In their works, Francois Quesnay (1694-1774) and S. R. J. Turgot (1727-1781), the leading representatives of this school, divide society into three classes—agricultural, land-owning, sterile (manufacturing, trading, artisan). Physiocratic theory coincides with the interests of the rising French farming class, at that time occupying an ever-growing influence.

Labour was the source of value and surplus value, thought the Physiocrats, but only so far as agriculture was concerned.