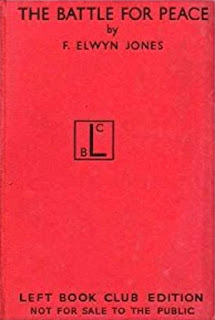 Book Review from the October 1938 issue of the Socialist Standard

This book, published at 2s. 6d., as the August choice of the Left Book Club, can fairly be said to be representative of the opinions of those who see in an effectively functioning League of Nations, collective security, and Peace Blocs, a guarantee for the preservation of peace, and the downfall of the “ aggressors." Like so much Communist-inspired propaganda, the cause of war is sought, not so much in the social forces that operate in society, as in the evil intentions of individuals and governments. Now Chamberlain; now Hitler; now Mussolini; and now the whole lot together are represented as the villains of the piece. The inevitable outcome of the mode of thought is to insist that all that is necessary to establish peace is to replace those governments that are “aggressive" with governments of “peace-lovers"; as well as replacing those governments that show lack of zeal in standing up to the dictators (non-Russian, of course), by gentlemen who are determined, in the interests of peace and democracy, to tell the dictators where they get off, even though the sacrifice of millions of lives might be necessary to lend emphasis to this pacific gesture.

Needless to say, black is not black enough with which to paint the opponents of democracy; but when it comes to speaking of the “peace-loving nations," the democracies, no turtle-dove could coo softer. From this book it would appear that the Fascist powers have developed what our author is pleased to call a “new technique of aggression" which consists “of stirring up rebellion by a national or social minority within the territory of the proposed victim and supplying the rebellion with arms, men, and money" (p. 14). This assertion is reinforced by numerous quotations from the world Press. Indisputably, Germany, Italy, and Japan, are spending huge sums of money in the hope of weakening their opponents through “Trojan Horse" tactics. But to imply that they are alone in so doing is nothing short of absurd. This “new technique of aggression" is as old as Imperialism itself, and has been practised, and is being practised with extraordinary success, by that buttress of world peace and democracy, the British Empire. Mr. H. N. Brailsford, for example, quotes in his “War of Steel and Gold" the following extract from a despatch from Sir Edward Malet (Egyptian blue Book, No. 7 (1882),, p„ 107): —

“It should be remembered that the present (Nationalist) Ministry is distinctly hitherto bent upon diminishing the Anglo-French protection (sic), and that, as a matter of fact, our influence is daily decreasing. It will not be possible for us to regain our ascendency until the military supremacy which at present weighs upon the country is broken. . . . I believe that some complication of an acute nature must supervene before any satisfactory solution of the Egyptian question can be attained, and that it would be wiser to hasten it, than to endeavour to retard it." A pretext was found; Alexandria was bombarded in 1882, and Britain shouldered yet another part of the “White Man's Burden." That at the same time it secured twelve per cent, on an usurious debt is, of course, irrelevant.

The “new technique of peace" outlined by the author in his final chapter, is as moth-eaten as his “new technique of aggression." It consists of an alliance of the powers “that wish to remain faithful to the principles of international order— Great Britain, France, Soviet Russia, and the smaller powers who would fall in line with a firm policy led by these states." They would then agree to use their armed forces in defence of any country faced with an unprovoked attack. As if such a thing as an unprovoked attack were likely to happen! Never has any capitalist power gone to war in a spirit of aggression—it has always been the other fellow who started first.

For people who are always mouthing the word “dialectics" this dividing the world up into “peace loving" powers and aggressive powers seems a curiously undialectical way of viewing the relationship of world capitalist forces. Isn’t it crystal clear that the one group is but the looking-glass image, the reverse side of the medal, of the other ? In a world of states whose policies are based on the plunder of the world working class and each other, the “peaceful" powers (those interested in maintaining the status quo) are a condition of the existence of the aggressive powers (those interested in upsetting the status quo). The fact that the one group is more or less interested in maintaining peace, whilst the other group drives to war, is incidental. The policies pursued by both are the inevitable result of the social relationships that operate in each.

Unlike the Communist Party and the Labour Party, the Socialist Party of Great Britain is indifferent whether or not Mr. Chamberlain and his National Government know how to manage the affairs of British Imperialism as well as is humanly possible in the most difficult circumstances. Because Mr. Chamberlain appears reluctant, wisely or unwisely, to embrace whole-heartedly the advice given by the Communist and Labour Parties as to what the foreign policy of British Imperialism should be, Mr. Chamberlain is dubbed a Fascist. Let us be sure that if the British Government now leans towards the Fascist powers, and now towards the Democracies, its policy is always determined by the interests of British capitalism. In passing, let it be noted that it can hardly be an accident that the "have” powers are democratic, whilst the "have nots” are Fascist. Even Soviet Russia has entered the list of democracies with a brand-new "constitution.” However, it does seem that the Communists may be satisfied eventually; for the line-up in the future war to save peace, democracy, and Socialism, seems to be coming clearer. The old firms re-emerge; on the one hand, Germany and her satellites; on the other hand, Britain, France, and Russia, with Italy prepared to play her traditional rôle of selling herself to the highest bidder. As far as Russia is concerned, as has been said in effect elsewhere, if it was good enough to make Russia of Tsar Nicholas the cornerstone of European democracy in 1914, surely it is good enough to confer the same honour on the Russia of his successor, Comrade Stalin.

As Socialists, we are more concerned as to what will be the attitude of the working class, and, unfortunately, that already seems to be decided. The T.U.C., speaking: in the name of 5,000,000 organised British workers, has, with the almost unanimous support of the assembled delegates, committed itself to stampeding the working class into a holy‘ war against Fascism. As the Sunday Times, commenting on this in a leader on September 11th, states: "No one whose memory goes back to 1914 will miss the contrast between the two occasions. In 1914 the British Labour movement was strongly pacifist—not till the eleventh hour, but till the twelfth hour. Only when war broke out did the scales drop from its eyes; till then it had been criticising a very pacific British Government for supposed bellicosity. Now the boot is on the other leg; the Government of the day is reproached, in effect, with not seeming bellicose enough.” And goes on to say : " . . .  its [the T.U.C.] pronouncements were made with a sense of their implication. What they imply is the acceptance of war as something preferable to the ‘destruction of peace by savage aggression.’ ”

How envious Hitler must be of the British ruling class! No need for them to stage circuses, demonstrations, or indulge in exhausting bouts of spell-binding, for the; purpose of infecting the masses with war-fever! Our anti-Fascist Communist and Labour Radicals have successfully destroyed what pacific sentiments the British workers might have had, and, holding aloft the banner of anti-Fascism, are doing the dirty work of capitalism in a thoroughly efficient manner. This book, ”The Battle for Peace,” is, in its own way, a contribution towards that dirty work.