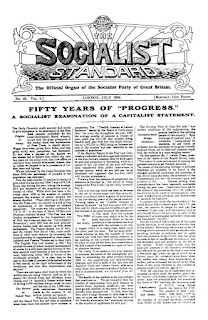 Like the printer in Ibsen’s “Enemy of Society," I am a man of discreet moderation and of moderate discretion. I disclaim and abhor violence. I am one who is prepared to compromise with the enemy to obtain part of what I desire. When agitating for a specific loaf l am ready to accept either half the loaf or the promise of a quarter at some early future. Society is not composed of blacks and whites, or clear-cut classes of workers and shirkers, like my friend Jones imagines. I once thought that as he grew out of youth he would cast aside his perverse, impossible spirit. Society is an organism, a growth, a whole of which we humans are interdependent cells; and my politics and economics are not rigid, cut and dried doctrines, but flexible and fluid habits of mind. Let me give you a few examples of his ridiculous rigidity.

Our town boasts a successful debating society. Many of my Labour comrades entered this society with the avowed aim of cunningly permeating the debaters with a moderate, calm Socialism. Whatever the subject matter of the debate was we astutely endeavoured to show its relation to Socialism. Especially when the orthodox subject of State Socialism was dealt with by the enemy in the orthodox manner did we try our level best to show the society that the essayist was attacking a noxious and antiquated chimera. We were slowly compelling by superior logic, even our opponents to see that the old, rigid, unemotional, cataclysmic, class-struggle Socialism was un-English—Continental, in fact—and is now entirely discredited. I personally played a prominent part in showing how we attain Socialism step by step, now by the abolition of barmaids, now by Sunday closing of drinking dens, now by finite but ever increasing taxes on the value of land. The old view of the coming of Socialism, the expropriation of the expropriators, the stubborn opposition of the plutocracy, the determined democracy, the blood-red dawn of the Socialist Monday morning—all this I ruthlessly exposed by explaining how all successful modern exponents of Socialism believed in such a peaceful, pellucid transition to Socialism that no one would be able to say that here at a definite stage capitalism capitulated, and here the Socialist Commonwealth was born.

Then up rose my friend Jones and to the very evident glee of the enemy attacked my moderate, permeating Socialism after the manner of his kind, brazenly, vigourously, and with the self- confidence peculiar to him. He poked fun at my “organic social movements” and substituted his hair-raising class war; he declared that the fantastic analogies of all the “philosophers" from Spencer to Macdonald were no adequate equivalent for the clear-drawn illustrations of the Marxian class struggle. He had no faith in the crux of our creed, that the social instincts of the plutocracy will prove more powerful than their class interests. He attacked bluntly every institution of any note whether political, charitable, or charitable-theological, from the Fabian Society to the Emigration Army. The Liberal leaders who would meet us half way were humbugs, the Labour leaders had been humbugged. Palliatives postponed Socialism. Socialism spelt revolution, the deliberate, conscious overthrow of capitalism; the working class organised politically, with their representatives in Parliament, economically, in enlightened Socialist Trade Unions. In short, the work of months was undone. The society no longer accepts our assertion that revolutionary Socialism is cremated. We have, through the impulsive Jones, the onerous task of defending not simply a minimum wage, a minimum of education, a minimum of leisure and the conduct of the Labour Party, but even now Socialism itself. I am afraid that we shall be compelled to cancel Jones’ speaking engagements with our local Labour Representation Committee.

But the climax of my friend’s political career came when he was our candidate at a municipal election. His election address was unpractical and doctrinaire; it lacked constructional spirit; it was brusque in dealing with some of the chief planks on our programme, viz., that we should have better railway facilities in one of our wards, and that the recreation ground was in want of repairs. And when but three days from the poll he rashly alienated the Nonconformist and Salvation Army votes. “General” Booth had just previously passed through the town on a tour, and Jones took advantage of the occasion to make a badly timed attack on what he termed “Salvation Syrup.’’ But the Nonconformist incident was typical of the impossibilist spirit. My friend’s election committee had invited a very popular and influential dissenting minister to address a meeting for the people’s cause. At the great risk of offending his congregation the minister accepted. He was a new convert to Socialism. I just forget the particular organisation of which he was a member—a “League of Progressive Thought’’ or something of that kind. But certainly it was a Socialistic organisation. Jones.was glum and saturnine when informed about his new comrade, but nothing he said prepared us for his unwise and precipitate action at the meeting.

It was certainly a great meeting. The council school was full and cheers greeted the plucky young minister when he arose to give hie address—or sermon, as Jones said. I thought his speech splendid. He declared himself in favour of an eight hours day for railway workers, endowment of motherhood, and a Minister of Labour. He also spoke well in an appeal for the cultivation of the best sort of Socialism, the improvement of individual character, the care of the Soul: for was not the regeneration of the individual the aim alike of the Church and of Socialism ? He showed how Martin Luther and John Wesley each had dim but unmistakable premonitions of the Socialist idea; and with his fine tenor voice moved his audience to tears by an earnest condemnation of contemporary society as a mingling of blank and blatant Atheism and the most unrighteous materialism.

Then Jones spoke. He almost sneered at the minister's vivid denunciation of the slum. Flat and plain he said that had he been aware of the minister's ideas he would never have occupied a platform by his side, and that if the reverend gentleman wanted regeneration and abolition of blatant Atheism he would discover suitable allies amongst the Primitive Methodists.

The election was not won. Jones is not yet councillor or member of Parliament. His latest freak is to join a small and noisy gang of impossibilists. These men are such a body of troublesome revolutionaries, that the cultured and elegant editor of the Socialist Review tells us that they are driving our sensitive Labour leaders into the arms of the Liberal party. They heckle our lecturers, demand debating engagements, and frighten the life out of our young speakers. They forget that the English working man is not built after the fashion of bis French and German compeers: he is definitely conservative, with a defendable love for venerable traditions and ancient institutions. So we must humour him and organise a Labour party without a programme, for as our comrade Wardle, who is a member of Parliament — a body which is the Will of All, the general active Will of the nation — as our comrade has shown, a pregramme was the means of wrecking the historic Liberal party, and will be the destruction of the Labour Party if it is so forgetful of its constructive spirit as to adopt one.
John A. Dawson
Posted by Imposs1904 at 6:53 AM