Between the Lines: Jewish Anarchists and the Wobblies (1986) 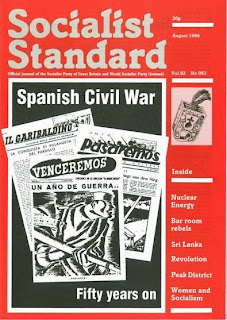 We lost; they won


It has been a miserable few weeks for "us". First "we" got torn apart by the Indians in the Test Match. Of course, "they" were using unfair tactics -  and "we" taught "them" how to play the game. Then "the Argies" get their own back in the World Cup. Maradona, using the Belgrano tactic (when "they" do it's called cheating to win) knocked the Falklands spirit out of Jimmy Hill. Then some unknown American (worse still, a negro) demolished "our" boy, McGuigan. And to finish it off "we" didn't stand a chance at Wimbledon. TV sports commentators — a unique tribe of know-nothing nationalists — are buried in the vocabulary of "us" and "them". World sport becomes a spectator version of world war, and viewers are treated to such phrases of nationalist nonsense as "Well Jimmy, it looks like the Brazilians are up to their old Latin tricks" and "Look at those Moroccans — they must be proud to be playing against a team like England". (Morocco beat England.) And as the World Cup final was played between England's two old enemies, "the Jerries" and "the Argies", wasn't it a pleasure to watch Jimmy Hill sitting there trying to find a way to hate each more than the other?


How to succeed in nastiness

It is not often that this column has reason to mention Terry Wogan. Perhaps that is because we endeavour to deal with the TV output which our readers are likely to bother with. But much as one tries to avoid him, it is difficult to watch BBC TV for very long without being caught. Wogan (BBC1, 2 July, 7.00pm) had as his guest a fifteen year old boy who had started his own business, employed other people and was raking in a five-figure income. He boasted about being driven to school in a chauffeur-driven car and eating in the best of restaurants. How did he achieve this? By employing others to work hard to make him profit. We were not told where he got his initial capital from and no doubt viewers were supposed to conclude that here was a model of how they too could get rich. In fact, the kid was a rather nasty bit of work, boasting about how he ensured that his employees did not "misbehave" and explaining how examination knowledge was of no interest to him. Quite true: you don't need to have many ideas to get rich, just plenty of wage slaves willing to carry you on their backs. Capitalism loves the successful entrepreneur (remember Freddie Laker?) and the mass media offers every impoverished wage slave the promise of reaching such frank prosperity. We look forward to seeing Wogan interviewing a few of the countless victims of the dole queue to see if they have as much to laugh about.

It makes a refreshing change to find a TV programme dealing with radical ideas in a serious and sympathetic manner. The Free Voice of Labour: The Jewish Anarchists (Channel 4, June 26), was the fourth programme in an excellent series on American labour. The film, using interviews, snippets of rare films, newsreels, stills and song, told the story of the Yiddish anarchist paper, Freie Arbeiter Stimme, established on 4 July 1896. Although the aim of the paper was to spread ideas about a society without government, coercion and wars, it also provided a medium for Yiddish culture, theatre, poetry and literature.


The historian Paul Avrich, author of several books on anarchism, explained how Jewish immigrants escaping from Eastern Europe were disappointed with life in capitalist America. The so-called land of liberty, promise and opportunity, was brutal and oppressive. The conditions of labour in the sweatshops and factories of Boston and New York were miserable, the wages low. Some of these experiences are reflected in the folksong, Mayn Rue Plats, (My Place of Rest).


The Jewish immigrants worked mainly in the needle trades and it was here that anarchists and radicals became involved in the struggle, often violent, to establish trade unions and the eight hour day. This story is captured in the Yiddish feature film, Uncle Moses (1932) and in the folksong, Makhnes Geyen (Masses Marching):

How long, oh how long
Will you remain enslaved
Bearing the shameful shackles?
How long can you create magnificent riches
For him who robs you of your bread?
How long will you stand stopped back,
Down trodden, homeless, in pain?
It's dawn, already! Wake up!
Open your eyes!
Recognise your strength of steel!


The Jewish anarchist movement was at its height between 1880 and 1920, and during this short period of time it helped to influence the development of the American labour movement. In the 1920s and 1930s anarchist ideas were kept alive by Italian and Spanish immigrants. Several reasons were given for the decline of the Jewish anarchists. Firstly, the overthrow of Tsarism in Russia by the Bolsheviks, who used slogans such as "All Power to the Soviets", attracted many young and active anarchists, who formed the backbone of the American Communist Party. Secondly, America's entry into the First World War led to an increase in patriotic fervour and a crackdown on all "subversive organisations". Anarchists and Wobblies were attacked for making anti-war speeches. The Palmer raids led to persecution and imprisonment for radicals. Under the Espionage Act, anarchists such as Emma Goldman and Alexander Berkman were deported. Finally, Jewish anarchism can be seen as partly a response to the experience of being an immigrant in a strange and hostile country. Future generations were rapidly assimilated into mainstream American life. With the decline of Yiddish language and culture went the decline of the Freie Arbeiter Stimme. It ceased publication on the 25 November 1977, with a circulation of 1,700.

Many of the ideas discussed in this fascinating programme have been consistently advocated by the Socialist Party - the abolition of the state, opposition to all capitalist wars, and rejection of the state-capitalist system found in Russia and other so-called socialist societies.

Having watched this programme and sung along with Hey, Hey, Daloy Polltsey (Down with the Police), I somehow couldn't face the next programme, Their Lordship House.

On July 3, C4 continued their series about American labour history with a programme on the Wobblies, the Industrial Workers of the World. It described their attempts before and during the First World War to organise unskilled and immigrant workers into the one big union. These workers were in a weak position, working long hours for low pay and often their periods of exploitation were irregular. The Wobblies had some success in recruiting them, much to the consternation of the bosses and their newspapers, who described the union men as thugs, vagabonds, workshy and other such names popular among defenders of the parasite class.

The programme had some old Wobblies recalling several successful strikes, where the solidarity of the workers paid off despite the violence and intimidation of the bosses, their police and courts. The determination and intelligence of these people was a conclusive answer to those who doubt workers' ability to organise for themselves.

The Industrial Workers of the World were beaten when America joined the war and the bosses made sure there would be no interruption to the military defence of their markets and strategic interests. This came about at a time when the Wobblies were split over the Russian revolution, which many wrongly saw as the workers taking over the factories for themselves. One weakness of having leaders and followers was shown when the leaders of the Wobblies were jailed on trumped-up charges or fled the country to Russia. If there are no ringleaders then it is difficult to pick them out.

The actions of the state in breaking up the Wobblies show the inadequacy of organising in one big union. You ignore the state at your peril. A separate political organisation aiming at democratically seizing state power is needed; union organisation is necessary, but is never enough.

Many of the Wobblies as migrant workers were deported for their "anti-American" activities, and a poignant scene showed them being shipped out past the Statue of Liberty. Coincidentally, the next day most news programmes had an item on the restoration of the statue, and its lighting up on Independence Day. This is a time when Americans are supposed to celebrate the anniversary of a change in their exploiters, from foreign to homegrown ones.

Ronald Reagan was at the ceremony, of course, where he made his usual speech about freedom, liberty and the US being a shining city on a hill, showing the way for all freedom-loving people. Reagan uses the words freedom and liberty a lot. The previous night's programme showed that in America, as elsewhere, it is the freedom for the bosses to exploit the workers, and the liberty of the workers to be wage-slaves, to starve or to get beaten up for resisting.

World in Action (ITV, 7 July, 8.30) showed a documentary entitled The Wirecutters. It was about the 2,000 odd reformists whose contribution to preventing a Third World War is to cut the wire fencing around US military bases — a pathetically futile waste of time, although one could not doubt their sincerity. No doubt either about the sincerity of Lady Olga Maitland when she says that we need bombs to preserve peace, but sincerity is insufficient. The reaction of most workers to reformists like the Wirecutters is to say that they will get nowhere. Then when they encounter socialists talking about how the means are at hand to really end all war they dismiss us with the same cynicism. The message of this documentary is that reformists not only fail to eradicate the problems they claim to be solving — they make it harder for those of us who are advocating the real solution.

First came the leak and then the publication and then the interpretation of the Peacock Report on whether the BBC should be nationalised, privatised, commercialised or simply left to carry on telling lies in the same old way. The Socialist Party's verdict on the report? Yawn! Snore! Throw Terry Wogan to the lions!

Originally this post was just the Jewish Anarchists part of the column, but I decided to include the entire column for the purposes of forwarding it to the SPGB website.

The comment from 2011 which says nothing more than the number 1070 indicates how many views The Jewish Anarchists post had received at the time of writing on the MySpace page where I originally posted the piece. The url for the blog is a bit of a giveaway but once upon a time this blog had been set up for the sole purpose of providing a back up for my unofficial page for the Socialist Standard that I'd set up on MySpace. I'd become concerned that the MySpace page could be deleted at a moments notice and I'd wanted to ensure that the material on the page that was nowhere else on the net except on my MySpace page wouldn't disappear down the internet plug-hole.

On the article itself, reading through it again for the first time in decades I realise that Steve Coleman is 0/2 in the opening sports section of the review. The boxer who defeated Barry McGuigan was not African-American: Steve Cruz was Hispanic. I remember watching the fight at the time. And England were not beat by Morocco in the groups stages of the 1986 World Cup in Mexico. They drew 0-0 with Morocco. It was Portugal who beat England in the groups stages. Again, I remembering watching it as a kid on the portable. All before I discovered the SPGB and the Socialist Standard. Steve should have stuck to Habermas and the Soap Operas . . . and I should have stuck to watching sport on the portable.