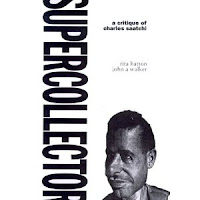 Book Review from the February 2001 issue of the Socialist Standard

Supercollector: A Critique of Charles Saatchi. By Rita Hatton & John A. Walker (Ellipsis: London, 2000).
This book is frustrating to say the least, due mainly to the authors' naïve, sub-Trotskyite standpoint. However, it still gives quite a useful overview both of Charles Saatchi as a "super-collector" and of capitalism's ongoing relationship with art in general.

Saatchi, better known perhaps as a high-flying advertising guru, is described as someone who, as a player on the art market, "could be said to have taken control of the means of production and distribution". This indeed seems to be the case, as his influence on contemporary art is immense. He is someone with the means to buy, show, advertise and sell art in vast quantities. It can even be said that the ludicrously named "young British art" (yBa) movement (if you can call it that) "was possibly the first movement to be created by a collector". The way it all works is described thus:


"By seeking out new art before it became well known and expensive, Charles and Doris Saatchi were able to buy it relatively cheaply. If and when it increased in value they could re-sell it and use the profits to buy yet more new, cheap art . . . The beauty of the scheme . . . was that the increase in fame and monetary value of the art they had acquired was due in part to the very fact that they had bought it and—once they had a gallery of their own—exhibited it and memorialised it in catalogues" (p. 121).

Art buyers may be investment managers who need never actually see the artwork in question—the market value and the likelihood of it holding or increasing its value is the important thing rather than any aesthetic qualities. Works of art tend to hold their value well even in times of recession so they will always be a good punt for the anxious capitalist investor. The very fact that Saatchi has been seen to buy work by a particular artist is one way in which it is signalled that work by this individual is "valuable" and therefore worth buying. For producers of art then it became important to get noticed by a big-time buyer and reseller like Saatchi if their work was to become saleable. It became advantageous then for artists to produce work that fitted the profile of the stuff he and others had been buying—producing art entirely to meet prevailing market demand. Until that is the super-collector finds something else "new" and "sensational" which he can buy into cheap, exhibit and sell at a profit. The views of one art critic, Robert Hughes, are summarised like this:


"To meet the demand for so many shows in cities around the world ... fashionable artists ... are compelled to raise productivity and operate on almost an industrial scale"(p. 79).

Industrial capitalist relations between buyer and seller of labour demand industrial methods to keep up with demand for the commodity. It could be argued that this has been reflected in the sort of art that has been produced lately, especially in Britain. We hear for example of Damien Hirst's Some Comfort Gained from the Acceptance of the Inherent Lies in Everything; a piece of work consisting of two cows sliced into 12 parts and preserved in glass and steel cases which Charles Saatchi bought for $400,000 in 1996. No doubt abattoir workers may be wondering how the "artistic process" behind this piece differs from what they have to do day-in, day-out. This is an important point as "conceptual" art like this is just that: a "concept" thought up by an artist, who will then often hire other people to actually make it.

Piles of bricks, bits of cow or heaps of electrical goods (such as Turner Prize-nominated Tomoko Takahashi's Line-Out) are basically everyday objects which have been recycled as "art" and given a massive price tag. Essentially we all know that there is no difference between Tracy Emin's unmade bed and our own, other than that one is labelled "conceptual art" and worth a fortune and the other is an unmade bed. This sort of stuff can be produced quickly though, which is no doubt why it has proved so popular with the art market. The most striking thing about conceptual art is probably the lack of concepts. At best the ideas that inspire much of it seem to be superficial poses, and the almost total lack of any bodies of theory or ideology behind the recent art "movements" is surely a testament to this. An interesting point this book does make is that of the links between conceptual art and advertising (the two fields with which Charles Saatchi is personally associated). Both aim at instant impact, sensation or controversy and both do so to sell a product and mask a total lack of real substance or meaning.
Ben Malcolm
Posted by Imposs1904 at 4:18 AM