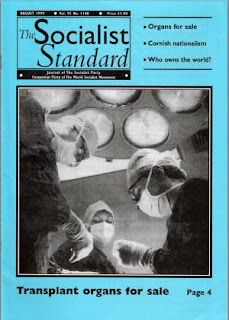 Editorial from the August 1999 issue of the Socialist Standard

We really know very little about the complex process by which people become socialists. But we do know that advocates of socialism and supporters of capitalism are very far from entering a level playing field. There are powerful social forces that combine to keep the present system going. The schools and universities teach us, subtly and sometimes not so subtly, that buying and selling, handling money, seeking employment, voting for leaders every few years, thinking in national terms, and so on, are all part of the "real world" in which we live.

The newspapers and journals we read don't need screaming headlines urging us to choose capitalism—their "news", features and advertising unite in assuming a capitalist world. The TV programmes, films and videos we watch and the radio programmes we listen to are similarly slanted. We are sometimes entertained by sagas from pre-capitalist times, but never stimulated by scenes depicting a possible socialist future. The books we read, whether fiction or non-fiction, are overwhelmingly non-political, which means they carry the covert message: "Don't even think about changing the system—better still, don't even think there is a system." Even the theatre, whose plays occasionally feature ideas that socialist reviewers can relate to, is routinely a place where our imagination is invited to venture no further than the bounds of private property society.

In a world of conformist and consumerist education, mass media, popular culture and entertainment, can we expect conversations between individuals to be any different—perhaps less capitalistic, maybe on a higher plane? We can expect, but we shall be surely disappointed. In the family circle, among friends or neighbours, on the way to work, at work, at play, you can hear variations on a sadly small number of themes. The talk is topical and predictable. It emanates largely from the media: what we saw on the box, what we heard on the radio, what we read in the paper. The antics of our leaders or the royals, what numbers won the lottery, how the match was won or lost, what's in fashion, the latest crime, what's good for the "economy" (even the skint may regurgitate views on that last one).

If capitalism relied on the support of capitalists to keep it going it wouldn't last a day. It is kept going by the ideas and behaviour of workers. Most of the population—not socialists, of course—passively and sometimes actively participate in their own exploitation. Socialists living in capitalism are exploited but strongly object to being so—and we do all we can to explain to others the nature of this exploitation and the way to end it.
Posted by Imposs1904 at 3:01 AM