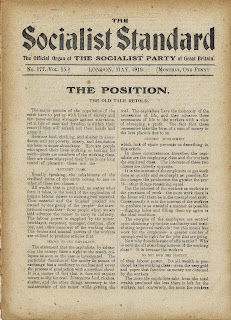 From the May 1919 issue of the Socialist Standard

Recently the writer received several copies of "The Red Flag," a journal published, as it announces, "when circumstances and finances permit, by the Socialist Party of Canada." Their previous organ, the "Western Clarion," was suppressed by the authorities some months ago.

The first number of "The Red Flag" (Jan, 11th, 1919) contains in its editorial evidence of the freedom-loving nature of the Canadian government. It says: "The official organ of this party has been suppressed, and representations to Ottawa (chief press censor) are so far without results. Leaflets mailed have been confiscated and complaints ignored. Almost every letter which arrives at this office bears unmistakable signs of having been opened, though no censorship mark to that effect is on them. All such letters are unduly delayed, being some four, five and six weeks in the mails before delivery. Most of such letters contain remittances for dues or for literature, etc."

"Moreover, letters and parcels which we have despatched have failed to reach their destination. The mail of individual members of the party also suffers from the same despicable secret censorship. Our protests and complaints to heads of departments result only in officially equivocal and evasive replies. The greeting the writer received from the postmaster in Vancouver on making a personal representation to him was, 'You are a Bolshevik,' and that was all he would vouchsafe of definite character in his replies to questions."

By an "Order in Council" the Canadian Government has made it an offence punishable with 5,000dols. fine, or five years' imprisonment, to be in possession of any of the Socialist (or, other) literature published by C. H. Kerr and Co. of Chicago.

I take the following from a letter of a Winnipeg comrade, dated Jan. 31st: "Two Sundays ago our Local pulled off a meeting, took in 80dols. collection and sold 35dols. of literature . . . We decided to hold another meeting last Sunday, but owing to threats by returned soldiers could not rent a theatre and had to try the market square. We were to start at 2.30, but at 2 o'clock a parade of veterans started out to see that no meeting was held. We refused to allow our speakers to try to talk as we smelt trouble, so they cleared out our headquarters, threw our furniture out of the windows, etc., and stole all our literature - which, I hope, they read."

Then, under the pretext and cry of "Down with Bolshevism," the mob of deluded fools raided and looted all the German and Austrian clubs and "murdered about half-a-dozen foreigners by the simple expedient of beating them to death."

The following incidents are related in the report of the "Winnipeg Telegram" (Jan. 28th, 1919): "One German was captured in Main Street, broke away, and ran into a store. Both the storekeeper and the fugitive were dragged out and given a warm five minutes. The German refused to kiss the flag, and broke away again. He was outdistancing a soldier - who yelled to an officer who was out for a stroll, 'Stop him'; the officer immediately swatted the fugitive with his cane, felling him to the sidewalk. 'I guess that'll hold him Scottie,' coolly remarked the officer, who then proceeded on his stroll quite as though he had accomplished the most matter-of-fact thing in life. Ten minutes later the fugitive picked himself up from the devilstrip of Main Street, and like the Arab, silently stole away, leaving behind a large pool of blood." Several similar incidents are recorded.