The Green Party's Basic Income Scheme: could it work? (1988) 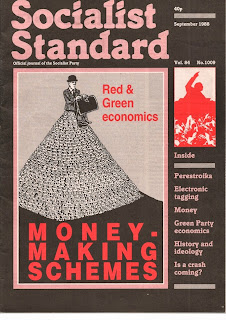 From the September 1988 issue of the Socialist Standard

In their manifesto for last year's general election the Green Party proposed to "guarantee economic security to each person as a right" by instituting a Basic Income Scheme involving "an automatic weekly payment to everybody, throughout life, regardless of sex or marital status, non-means tested and tax free, at different rates for different age-groups". No figures were mentioned but the manifesto stated that "the payments would guarantee an income adequate to live on, higher than current welfare benefits".

This is a scheme, then, to give every adult in Britain, whether in work or not, an income high enough to allow them to live appreciably above the official poverty line. The idea behind the scheme - guaranteeing everybody security from material need - is entirely laudable. But could the scheme work within the present economic system?

The prices-wages-profits system
The basic feature of capitalism is that wealth is proposed for sale and that people's incomes - whether wages and salaries, profits or benefits - derive ultimately from the receipts obtained from selling what has been produced. In fact the incentive to produce under this system is monetary profit, the difference between sales receipts and the amount of money originally laid out in purchasing the elements necessary to production (materials, buildings, machinery, power, labour, and so on). Maximising monetary profit is the primary objective of production and what makes the economic system function.

Out of sales receipts - or rather, to strictly accurate, out of that part of sales receipts representing the new value added in production - are paid both the work incomes (wages and salaries) on which most people now depend and the property incomes (dividends, interest, ground rent) that accrue to those having ownership rights in the means of production.

Wages and salaries correspond more or less to the cost of bringing into being and maintaining the working skills which employees sell to employers (cost of training plus the cost of housing, food, transport, and so on which employees must incur to maintain themselves and their families), while profits are the part of the newly added value left after wages and salaries have been paid. The government obtains the money to pay out social benefits from taxes which ultimately fall on profits or incomes derived from profits. Taxes on wages and salaries, by increasing the cost of maintaining employees and their skills, are eventually passed on, through the operation of economic forces, to employers in the form of increased money wages.

Where will the money come from?
What, then, would be the effect of introducing the Green Party's Basic Income Scheme into this prices-wages-profits system? If everybody, whether in work or not, is to be paid "an income adequate to live on, higher than current welfare benefits", we are talking about a massive increase in government expenditure. Which makes the question"Where is the money to come from?" wholly relevant.

We have just seen that the ultimate source of government revenue is profit made in productive industry. But if the money paid out as "basic income" is to be taken from profits -  the fuel on which the present economic system runs - there is a serious risk of reduction in economic activity and a knock-on effect leading to a slump and growing unemployment; in short, of provoking an economic crisis. In other words, the increased taxes on profits needed to finance the Basic Income Scheme would risk killing the goose that lays the golden egg.

Drastic fall in wages
In reality, however, all the money to pay the "basic income" would not be generated from existing profits, since a large part would come from the drastic reduction in wages and salaries that the introduction of the scheme would bring about. Employers would be provided with an extra income to compensate in part for the extra tax burden they would have to bear.

For it should not be imagined that wages and salaries would remain at their present levels if everybody, including those in employment, were paid a basic income of, say, £100 a week by the government. Such a payment would result in a fall in wages and salaries of an equivalent amount because, as we have seen, they are fixed by the operation of economic forces at around a level sufficient to maintain the employees in question and their skills.

If wage or salary earners are paid £100 a week by the government, they can use this income to maintain themselves; which means that the employer will be relieved of having to include an amount to cover this expenditure in the wage packet or salary cheque. Economic forces will therefore tend to ensure that wages and salaries fall to a level which, when added to Basic Income, will allow the employee to maintain him or herself. In other words, wages or salaries would become sufficient only to top up Basic Income to the economically determined level. Or, put the other way round, Basic Income (like Family Allowances today) would be a subsidy to employers, and a massive one at that.

Growth of voluntary unemployment
Employers, however, would not welcome the scheme because it would completely upset the wages system, under which people are forced by economic necessity to sell their skills to an employer. If people received an adequate income from the government, what would be the incentive to find employment?

This problem would be particularly acute for paid work at and immediately above the Basic Income level. The manifesto used a peculiar argument in this respect, stating that


The "unemployment trap" is created by the withdrawal of benefit when a person finds work. Perhaps more than any other measure the Basic Income Scheme would stimulate employment, since it would always be financially worthwhile to work.

It is not clear exactly what this means, but it appears to be accepting the common slur that many of the unemployed don't work because it's not financially worth their while; in other words, that much unemployment is voluntary. But this is clearly far from being the case. Most employment today arises because, for the time being, it is unprofitable for employers to invest in full production. The jobs are simply not there, and merely providing a financial incentive to work won't make them reappear.

As a matter of fact, and contrary to what the manifesto suggest, the Basic Income Scheme would probably lead to a massive increase in voluntary unemployment (not that there's necessarily anything wrong with that, but that's another question). Imagine a situation where people went to work for an employer only when they needed extra money to pay for some special item or, say, a visit to friends or relatives abroad. Imagine too what would happen to discipline at work if people were not there through economic necessity: they would (quite rightly) refuse to be bossed around or do unpleasant jobs. Profit motivated industry just couldn't function under such circumstances.

So, once again, the result of introducing the Basic Income Scheme would be an economic crisis. (Of course the whole scheme might be a subtle way of destabilising the present economic system, but I think rather that its architects really imagine it to be feasible.)

What's the alternative?
Our purpose in criticising the Basic Income Scheme and showing it to be impracticable has not been to defend the existing prices-wages-profits system but rather to suggest that some other way will have to be found of guaranteeing people basic material security.

The socialist answer would be to allow people free access to the common store of wealth set aside for personal consumption, according to what they themselves judged to be their reasonable needs. Other needs would be satisfied on the same basis. Houses and flats would be rent-free, with heating, lighting and water supplied free of charge. Transport, communications, health care and education would be organised as free public services. There need be no admission charges to museums, parks, libraries and other places of entertainment and recreation.

Such free access would be a much more direct way of ensuring that people were freed from material insecurity than the impractical Basic Income Scheme proposed by the Green Party. It would also involve, as a corollary, the transformation of work. Instead of working for wages to produce profits for an employer, people will be able to co-operate to produce what they really needed.

In fact such direct production for use, replacing production for sale and the profit motive, is the only possible framework within which we can satisfy our needs in an ecologically acceptable way. For, with the end of production for sale will go also the pressure for blind economic growth generated by the competitive struggle for profits. If production were geared directly to supplying needs it would eventually tend to platform off at a level sufficient to provide for current needs and repairing and maintaing the existing stock of means of production.