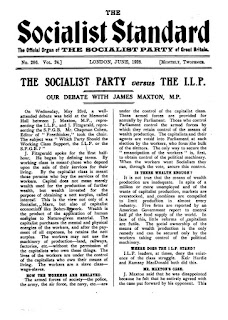 Editorial from the June 1928 issue of the Socialist Standard

Elsewhere in this issue we report a debate between the S.P.G.B. and Mr. James Maxton, who is Chairman of the I.L.P. Mr. Maxton insisted on treating the debate as one concerning him and his record rather than the record and policy of the I.L.P. In view of the chequered history of the I.L.P., this was not surprising, but such an attitude of repudiating the past and present leaders of his own party is not good enough. Mr. Maxton may, as an individual, repudiate the anti-Socialist actions and principles of Mr. Ramsay MacDonald, but there is only one way in which the I.L.P. can clear itself of responsibility for Mr. MacDonald, that is by expelling him.
To offer as an excuse the plea of tolerance for old comrades who "make mistakes" is an attempt to obscure the facts of the situation. When MacDonald and other prominent I.L.P.-ers supported the war in 1914, and Keir Hardie boasted of his success as a recruiting agent in Merthyr Tydfil, were these "mistakes"? (Will Mr. Maxton mention this when he speaks at the Keir Hardie Demonstration on June 23rd?) Was it a "mistake" that not one of the I.L.P. Members of Parliament voted against war credits during the war? Was it a " mistake " that I.L.P. Members were in the War Government?
The I.L.P. cannot escape the full responsibility for the actions of the Labour Party, since it has been content to remain inside that body. In the 1924 parliamentary Labour Party, raised to office by Liberal votes to carry on the administration of capitalism, out of 192 Labour members 120, a clear majority, were members of the I.L.P. As Mr. Roden Buxton, M.P., declared at the 1928 I.L.P. Conference,

The I.L.P. in Parliament was doing exactly the same thing as the Labour Party was doing. There could be no difference of opinion on fundamental issues. The fact was that they were doing the same day to day work.

Apart from its pre-war bargains with the Liberals, the I.L.P. is still guilty of urging the workers to return to Parliament men committed to the retention of the capitalist system. Mr. Maxton is perfectly well aware that MacDonald, Thomas, Hodge, Clynes, Henderson, and scores of other Labour M.P.'s, are not Socialists — why, then, does he and his party support these men at elections? Why does the Editor of the New Leader (May 25th) offer congratulations to the German Labour Party on their recent electoral successes, while admitting that that party is ready to "enter a coalition with the centre," that is, with the Catholic Party, open and avowed enemies of Socialism?
In debate, Mr. Maxton admitted that, after being in existence for more than 30 years, the I.L.P. still have in their statement of their aims the absurd phrase that "capital" should be "communally owned." He agreed that capital, being wealth used for the purpose of gaining a profit by the exploitation of the workers, cannot be communally owned, but he dismissed this as being merely a loose phrase of no importance. That it is more than a loose phrase is shown clearly enough in The Socialist Programme, published by the I.L.P. in 1924. Under the heading, "A Socialist Policy for Industry" (page 24), we find these words :—

The present shareholders in mines and railways could receive State mines or railway stock based on a valuation and bearing a fixed rate of interest.

The object of the I.L.P. is not, and never has been, Socialism. They do not propose to abolish the right of the capitalist to live by owning and to continue the exploitation of the workers. Their object is merely State capitalism or nationalisation, a reform which will not improve but worsen the condition of the working class. When Mr. Maxton announces his acceptance of Socialism and his repudiation of the policy of voting into power the defenders of capitalism, he is repudiating the programme, the propaganda, literature and the bulk of the members of his own Party.

THE GULF BETWEEN RICH AND POOR.
Mr. Maxton's continual objection that he had not done the things that other leaders of the I.L.P. had done was met by our representative with the point that Maxton's own address last month (as Chairman of the I.L.P. Annual Conference) contained proposals that could be supported by any Liberal Capitalist. These proposals were: (1) "A narrowing of the gulf that separates rich and poor." (2) "Abolition of the status implied in the terms master and servant, employers and employed, ruler and ruled." (3) "Reduction of arduous labour to the minimum necessary to material comfort and the more equitable distribution of that type of labour throughout the entire community." (4) "Land and capital must be communally owned."
A summary of Maxton's speech was printed in their official organ — the New Leader (April 13th, 1928) — to correct the mistakes of the daily press. When our representative drove home the point that every parson and politician talked of narrowing the gulf between rich and poor but that the socialist stood for the abolition of the gulf altogether by abolition of classes, Maxton said that their own paper had not printed the words in full, which were that the gulf between rich and poor was to be narrowed to vanishing point.
Several weeks have elapsed since his speech was reported, but no correction has been made by Maxton in their own paper. Only when challenged by our speaker did he plead that it wasn't a proper report. But the "narrowing of the gulf" idea is actually the "philosophy" of the I.L.P., as is easily shown by the Living Wage proposals upon which they spend so much time.
THE PATCHING-UP POLICY.
Maxton's defence of the I.L.P. was similar to the reform campaign of Lloyd George or any Liberal or Tory vote hunter. He claimed that, as they wanted large numbers, they could only get them if they advocated what the workers wanted and concentrate on bad housing, low wages and similar details of working-class life.
That outlook is completely opposed to the Socialist case. The Socialist recognises that, however much the conditions are reformed, the real causes of poverty, unemployment and insecurity will be untouched, and the effects, therefore, always be with us.
If our programme were concerned with the reform of capitalist conditions, and, as Maxton put it, we went on dealing with one evil of capitalism after the other, then our policy would be no different to that of any Capitalist Party, and just as ineffective. We are Socialists because we realise the entire system must be abolished before the evils can be remedied.
The policy pleaded for by Mr. Maxton that we must offer the workers what they want and appeal to what is in their mind, is a justification for preaching any nostrum for the sake of numbers. Not what the workers in their ignorance think is the right policy, but what we Socialists know to be the only remedy is what we must advocate. If the workers want wars or tariffs, then the I.L.P. should advocate them, because that is the way to get numbers on their side.
Posted by Imposs1904 at 8:02 AM

Hat tip to Graham in Denmark for transcribing this editorial.