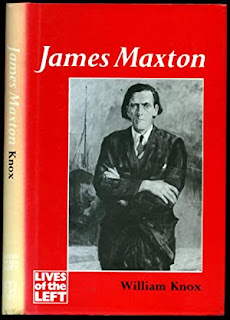 Book Review from the July 1988 issue of the Socialist Standard

Maxton's whole political life was devoted to the Independent Labour Party (ILP). He was its Chairman in 1926-1931 and again in 1934-39, served on various committees in the organisation and was one of its principal spokesmen in Parliament and up and down the country. So the measure of his achievement is to be looked for in the principles and policy of the ILP, its rise and eventual winding up.
In his book on Maxton in the Manchester University Press "Lives of the Left" series William Knox sets himself the task of evaluating Maxton's work. He rejects AJ.P. Taylor's assessment that it was "barren of achievement" but concedes that Maxton was not responsible for any identifiable body of political theory. On Maxton's claim that he was a Marxist, the author says that it was "a brand of idiosyncratic Marxism", whatever that may mean.
He quotes many opinions of Maxton: That he was a "powerful orator"; that he was "the finest gentleman in the House of Commons" (Winston Churchill); That he was "the greatest Briton of this generation both in his ideas and his life" and that "he made more socialists than any other comparable figure in Britain" (Fenner Brockway).
The author says that between 1922 and 1945 Maxton was "the personification of British left-wing democratic socialism", and offers this final judgement:

His oratory and challenging idealism influenced thousands of young people to become Socialists and instilled in them a vision of Socialist society which transcended the narrow, unimaginative doctrines of Stalinism and State Capitalism. As long as the idea of "Red Clydeside" and the world community of freely co-operative producers endures then so long will the name of Maxton, the "incorruptible conscience" of the British left. His search for a Socialist/Humanist solution to economic crisis and war is as urgent today as it was in the 1930s (page 150).

The reader of this may well wonder what exactly the author is trying to say. A critical look at Maxton's aims and activities in the ILP point to a much more definite conclusion. Maxton declared his great admiration for Keir Hardie, founder of the ILP and "Father of the Labour Party" and shared his views on aims and policy. (Maxton was, too, a great admirer of Lenin). He also shared Keir Hardie's weakness for making contradictory statements, sometimes declaring a commitment to socialism as a sole objective; sometimes looking to reforms of capitalism to solve society's problems.
Keir Hardie declared his unqualified support for socialism as defined by Marx in his From Serfdom to Socialism, published in 1907 when he was first Chairman of the Labour Party and three years later in his My Confession of Faith in the Labour Alliance. Maxton did the same in debate with The Socialist Party of Great Britain in 1928, a report of which was published in the Socialist Standard (June 1928). After the opening speech in which J. Fitzgerald had stated the case for the SPGB, Maxton said: "This state¬ment of socialist first principles was unassailable. The definitions were clear and correct. He accepted absolutely the diagnosis given". Several debates with the ILP took place over the years and it was customary for their speakers to take that line.
But later in the debate Maxton discovered "a point of difference". It concerned the need now to build up an effective machine for the achievement of socialism in the form of a majority of Labour MPs in the House of Commons. In this Maxton was following the strategy laid down by Keir Hardie when the ILP was formed in 1893. Hardie argued that it was useless simply to ask the workers to vote for socialism because they are not ready for it. As evidence he pointed to the inability of the Social Democratic Federation to get its candidates elected. Hardie's alternative was for the ILP to work first for the formation of a working class organisation with mass trade union support to send to Parliament MPs independent of the Liberals and Tories and then tackle the job of winning them over to socialism. That organisation was the Labour Party. Maxton repeated this in the debate: "The ILP seeks to induce the Labour Party to accept Socialism as their Object". But of necessity the strategy carried with it the tactic of promising all sorts of reforms in order to attract the votes of non-socialist workers. As Maxton put it, when defending the ILP's reformist "Living Income" policy: "The ILP wants socialism but the workers want a living wage".
The first half of the Keir Hardie strategy was a remarkable success story. The ILP concentrated on recruiting first the young local officials of the unions and then the national officials, so that by 1910 when there were 42 Labour MPs in Parliament more than half were members of the ILP. Its membership reached 50,000. As the Labour Party grew this continued and in 1924 when the first Labour government came into office, out of 193 Labour MPs 132 were members of the ILP. Twenty-six of them were in the government and six of them, including Prime Minister MacDonald, were in the cabinet. In 1929 out of 288 Labour MPs over 200 were members of the ILP. Again it was very strongly represented in the government and cabinet including, as before, MacDonald as Prime Minister. Among the MPs was another ILP member, Clement Attlee, who was to become Labour Prime Minister in the 1945 government. A distinction has to be made between members of the ILP who were candidates of local Labour Parties and the much smaller number who were the ILPs own candidates standing under Labour Party auspices.
So far so good. At that stage the ILP could congratulate itself on building up the mass party Keir Hardie wanted. But what of the next stage, getting the Labour Party to accept socialism as its object? If the ILP was to win over the Labour Party membership to socialism, who was to win over the ILP membership to socialism as a first step? For while the ILP published works by Marx, and Keir Hardie and Maxton could declare their support for Marx's conception of socialism, their own publications and election programmes were full of proposals for reforming capitalism. In the debate Maxton personally disowned some of these but that did not prevent the ILP continuing with them, because the majority of their own members had been recruited, not on the demand for socialism, but attracted by the reforms. A typical example of these many reforms was that dealing with unemployment, in the ILP's The Socialist Programme (1923). Having said that there was practically no unemployment in France, Belgium and Italy it explained how the same effect could be achieved in Britain if only the banks would "lend freely". Before many years had passed all of those countries, and Britain were submerged in unemployment much heavier than the level to be reached in the 1980s, but by then the ILP had discovered a new false cure for unemployment in the old rubbish of Keynes.
The ILP consistently misled the workers with its description of state capitalism (nationalisation) as socialism. One of its favourite nostrums was the nationalisation of the Bank of England. At the end of his life, when the Attlee Labour government came to power in 1945, "Maxton" says Knox, "especially welcomed the nationalisation of the Bank of England" (page 145) but by then the ILP had broken with the Labour Party and Maxton was opposed to re-affiliation.
With the formation of the first two Labour governments trouble had built up for the ILP in its relations with the Labour Party. In 1930 at a conference of the Scottish group of the ILP a resolution was passed demanding the expulsion of MacDonald from the Labour Party. The National Administrative Council of the ILP in June 1931 carried the following resolution:

It must be noted as a remarkable fact that to wage a Socialist fight against the poverty of the working class is made more difficult when a Labour Government is in power than at other times, and that obstacles are put in the way and threats directed against working class organisations maintaining that fight.

Maxton opposed the demand for MacDonald's expulsion. He was against expelling anybody. He wanted to keep them in the Party where they were "under control". He had got it all wrong. The ILP didn't control the Labour Party leadership, nor its own members who were leaders in the Labour Party. It was the Labour Prime Minister and his fellow ministers who insisted on enforcing the Labour Party discipline on the small group of the ILP's own Members of Parliament. It was over this issue that the ILP in 1932 disaffiliated from the Labour Party, by which time MacDonald and a few others had joined the Tories and Liberals in forming a National government. The whole of the Keir Hardie-Maxton strategy for socialism was in ruins.
Knox's statement about Maxton's oratory "which influenced thousands of young people to become socialists" can now be seen for what it is worth. It never even influenced them to remain loyal to the ILP, let alone to become socialists. When Maxton won the seat at Bridgeton in 1929 he got over 21,000 votes. When the ILP put up a candidate there at the 1955 election his vote was 2619 and he lost his deposit. After the 1945 general election the number of ILP members in Parliament had dropped to four, all of whom eventually drifted back into the Labour Party. The ILP has now vanished.
So what can be said of Maxton? He worked devotedly all his political life in the service of the ILP but his efforts achieved nothing for socialism because the Keir Hardie plan he followed was mistaken from the start. They had a wrong idea about the politics and economics of capitalism — and the same is true of all the long line of Labour Party leadership through MacDonald, Attlee, Wilson, Callaghan to Kinnock. As they see it, if you have the "right leaders with the right compassionate" policy as the government, all the evils of capitalism can be got rid of, one after the other. Marx and Engels wrote about such people in the Communist Manifesto in 1848:

To this section belong economists, philanthropists, humanitarians, improvers of the condition of the working class, organisers of charity, members of societies for the prevention of cruelty to animals, temperance fanatics, hole and corner reformers of every imaginable kind.

Keir Hardie, in 1907, said that the first "evil" they would tackle would be armaments. Eighty years later, with the destructive power of weapons multiplied a thousandfold, his political successors are still talking about it. On the political side Keir Hardie and Maxton imagined a working class becoming more and more attracted to socialism as they saw Labour governments progressively getting rid of war, poverty, unemployment, crisis, depressions and the rest. Capitalism isn't like that. Its "evils" are an integral part of the system itself, only to be removed by abolishing it - for which the Labour Party and the ILP never had, or sought, a mandate. So in 1987 we see the workers returning a Tory government to power for a third time.
The only organisation that can consistently carry on propaganda for socialism is one the membership of which is confined to socialists, with socialism as its only objective. The Labour Party and ILP never met this requirement. If winning over the working class to accept the socialist case is a painfully slow process, it is made more difficult by the reformist propaganda of the Labour Party and ILP.
Edgar Hardcastle
Posted by Imposs1904 at 4:41 AM