Between the Lines: Much ado about nothing (1987) 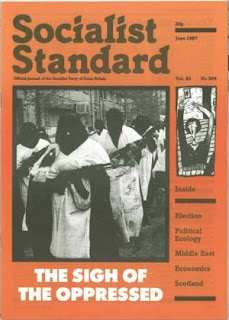 Am I just getting more fed up or are party political broadcasts getting worse? One has only yo hear those words, "There now follows a party political broadcast on behalf of . . . (Don't try turning over because we've stuck them on all channels)" to know that an insult to the public intelligence is about to be perpetrated. There was a time when these affairs were pretty simple efforts: Harold Wilson sitting behind a desk puffing lies in a fatherly sort of way or George Brown looking into the camera with the sincerity of a man who showed signs even then of ending up an SDP member of the House of Lords. In those days they would deliver their messages as abbreviated speeches and get off the screen. No we are in the age of hi-tech lying: video edited, maximum visual impact porky pies.

Take the Labour PPB of a few months ago where an actor stood next to a big globe and pointed at it with an imposing looking stick while talking about how the Tories are leaving the damned place undefended with their lack of expenditure on conventional bombs. This was drama, not politics, the medium was the message; vote for us if you like my shiny medals and big stick (This is the way to win the Harvey Proctor voters over). Then there was the Tory pre-local election PPB (5 May, all channels). This one had dire pictures of people in pain whom it was soon explained were in fact ratepayers in Ealing and Waltham Forest — of course, why didn't I guess? — whose rates had been put up by Labour councils. These rates, we were told with the aid of horrific graphics, were to support gay centres (there are simply hundreds of them in Ealing and Waltham Forest, don't you know) and anti-police campaigns.

Norman Tebbit came on at the end warning voters in hysterical terms that voting Labour would lead to suffering beyond conception. Perhaps my awareness of the inanity of it all was heightened by the fact I coincidentally watched the BBC2 version of the broadcast put out for the deaf with subtitles. You can watch TV politics and think it's twaddle and you can an article by a politician and think it's twaddle, but there is nothing quite like watching and reading it at the same time to confirm that it is pure, unadulterated twaddle.


Much ado about nothing

This Week, Next Week (3 May, 1pm, BBC1) had a bad dose of election fever. No election was announced, but that did not deter the producers of this little roll-in-the-mud from insisting upon a pre-election shove-around in the studio. So, in were brought Bryan Gould and Lord Young, two men whom few people had heard of a year ago, but who look like being the election faces of the year. It seems that, in the tradition of all jolly good public school pranks, Labour's Bryan Gould had written and had a published a Tory manifesto which looks just like the 1983 Tory Manifesto (Tee hee!) Lord Young was angry because Labour had nicked their design. Pushed to promise that the Tories would not do the alleged deeds Young wisely declined to commit his party to not doing anything. Also in the studio was an Alliance spokesman and a rubber plant.

With Peter Ustinov and Tony Benn as guests, Wogan looked worth watching. (29 April, 7pm, BBC1) After all, both are eloquent men who have been known to have more to say for themselves than Wogan's usual guests. In fact, the appearances were disappointing but that is not important: guests on chat shows quite frequently sell themselves short, simply because of the pressure placed by the format of such programmes to push your personality, as if the latter is something you slip into in the morning like your shirt.

What was striking from this programme and it has never been apparent (at least to this writer) in the past, was that Tony Benn had fallen in love with Russian state capitalism. Gorbachev's reforms are the greatest thing in 40 years . . . the Russians are a peace-loving people who are determined to avoid war . . .  the problem is that we have all these lies in the West about Russia. Benn sounded like a fellow traveller, pouring out all sorts of half-open hints of friendship in defence of one of the greatest tyrannies in the modern world.

Perhaps it was inevitable that an isolated Labour leftist, never really at home among the non-ideological void of Kinnockism, should finally drift towards the illusion of Stalinism. But it was sad to perceive. Benn said he was more optimistic now about the prospects of world peace than he had been in decades; the Gorbachev weapons reduction proposals were magnificent. If he believes that he'd believe . . . well, I suppose he does.

Aren't Charlie and Di a fine couple? Isn't it lovely to see her changing her frock every fifteen minutes? Doesn't he do fine work to help the poor? Wasn't it pleasant to see him walking around the grounds of one of his palaces talking to the plants? No to all questions, and that is why I, like others of sound mind, switched the nauseating parasites off after twenty minutes and went up the pub. (4 May, 8pm, ITV, The Prince and Princess of Wales: In Public, In Private.)
Steve Coleman
Posted by Imposs1904 at 9:17 PM