Between the Lines: Sinn Fein, Game Shows and Live Aid (1985) 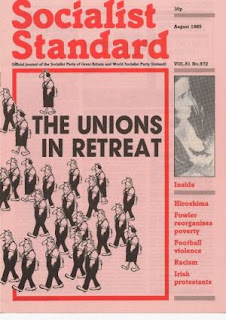 Sinn Feigners
Beatrix Campbell, in Diverse Reports (C4, 3 July), sought to portray Sinn Fein as a progressive, caring, reforming party—an image it seeks to put across to electors. It should not be surprising that a programme showed Sinn Fein's policies without constant reference to the party's support for nationalist murderers; after all, the Tory and Labour parties support national armies committed to obscene acts of violence, but this is not mentioned every time there is a programme about their policies.

And having seen the uncensored picture, what are we to conclude? Quite simply, that Sinn Fein is just another party of reformist politicians who want to run capitalism. As the party's leader Gerry Adams, said, "All we can do is  . . . achieve those very small gains by working along with the people within the system". So much for Assembly member, Danny Morrison's throwaway comment that Sinn Fein is "a revolutionary party". From Adams we heard the usual vague claims of a reformist leader: first the nationalist movement must be built up to oppose British rule, and then after the British have withdrawn and Ireland is independent there will be "the beginnings of a socialist society". What does this mean? Uncensored Adams neglected to tell us. Campbell, who is a feminist, asked Adams what the position of women would be once Ireland had achieved Home/Rome Rule; she stated that "for women this happens to be one of the most repressive cultures you can think of." But Gerry told her that her question was based on "cultural imperialism" and she, being English, should learn that Irish people are different.

At the end of the programme one was left with the clear impression of a political party based on the twin confusions of nationalist illusion and reformist promise. If there ever is a united Ireland, presided over by Sinn Fein, it will be another capitalist state and the workers living under it will detest Adams and his fellow would-be rulers as much as they do their present representatives.

Even without the terrorist violence, which socialist unequivocally condemn, there was plenty shown about Sinn Fein to justify the unreserved hostility of socialists towards them.

Money sickness
It was D. H. Lawrence who referred to "the collective money-madness of mankind",  and where better to  observe that madness than in the gambling establishments of Las Vegas. Showdown at Glitter Gulch was a documentary about the world poker championship (BBC1, 3 July)  - an event where the winner gets a million dollars. It was an obscene spectacle, all these idlers throwing hundreds of thousands of dollars on to a table while millions of workers go without a decent supper and millions more die for lack of money for food. It was not "human nature" which led these men to indulge in an insane monetary ritual — it was a social system which elevates money into the god of life and trains those with more of it than sense to invest their energies in acquiring more. A mad system drives men mad and this programme was a peep through the window of one of the top-class asylums.

The price is indignity
The same "collective money-madness", but at a cheaper rate for the proles, is The Price is Right (don't know or care when it's on). The programme succeeds in being the ultimate in tasteless money fetishism. Crowds of impoverished workers scream and throw dignity to the wind as the prospect of guessing the price of an electric carving knife turns them into human cash registers. The aim of the game is to guess how much commodities are worth and if the guess is near enough to the price you win. Game shows generally portray capitalism as its most grotesque, and the trouble with watching them is that we are supposed to applaud contestants for doing well.

Live aid
Live Aid for Africa (BBC, 13 July) demonstrated several things that it did not intend, The purpose of the concert was to raise money to stop people starving to death in Africa. Yet its effect will be minimal, negligible, crumbs thrown into an ocean of despair. What then did the event show? First of all, that workers, even when motivated by immense goodwill and collective concern, cannot solve capitalism's problems. During the course of the sixteen-hour concert British workers donated a mere £4 million in telephone pledges, less than the British Government spends on the military machine every three hours every day; less than the richest woman in Britain (the Queen( receives as interest on her personal investments in one week. Workers were 'phoning up and saying that they would sell their cars and donate their precious savings to the worthy cause — but asking the impoverished in Britain to feed the starving of Africa solves precisely nothing.

Secondly, the show demonstrated just how superficial is the moralising self-righteousness of those who do not understand the capitalist system. Periodically we would be urged — by millionaires who became rich by dressing up in fancy costumes and singing about love through sore throats — to "feed the world". But why is food dumped while people starve? Why do some people have banquets while others do not? In short, the whole event was an invitation to weep at the symptoms, and to hell with any concern about the disease. Indeed, Bob Geldof (who may be sincere, but it certainly naive to a dangerous degree) was seen repeatedly throwing his arms in the air, like a man who feels something but does not know what, and declaring that governments should "do something". In fact, governments are doing something: running capitalism and feeding the capitalists' hunger for profits.

Thirdly, the show proved just how musicians have become incapable of performing without record producers to twiddle knobs and make them sound any good. Some of the sets from Wembley and Philadelphia, presented without the benefit of studio treatment, ranged from not very good to pathetic. Demonstrated above all, however, was the power of communication technology: fourteen international satellites beamed the show to 50 million TV sets, reaching an estimated audience of 1.5 billion people. But just as this technology can unite millions of workers for a lofty, if ultimately futile, moral cause, so too can it bind them together for more sinister propaganda messages, such as those demanded for example in the build-up to war. Left in the hands of the capitalist minority the means of mass communication are a potent weapon. But used for socialist purposes, think of how the worldwide unity forged by Live Aid could be turned into an instrument for making democracy work within the global village.

Watching the show until the final performance by Bob Dylan (not an occasion worthy of the wait, as it turned out), I was struck by an overwhelming sense of depression — not just at the thought that fellow human beings are starving to death, although that is good enough reason for a sleepless night, but because all the goodwill, energy, determination and technological know-how put into "doing something about it" will not feed the world. Despite Geldof's moral crusade the obscenity of mass human misery will go on and on and on until Elvis Costello stops singing "all you need is love" and the workers realise that the world os ours for the taking. And finally the national anthem came on, and by the time it got to "Long To Reign Over Us" I was fast asleep.