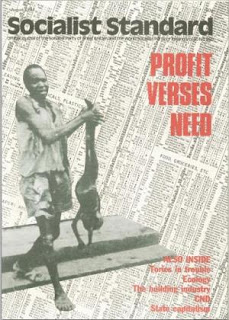 Further to the article by ALB in the July Socialist Standard which dealt with the possible use of information technology in socialism for stock control and the communication of needs to production, it was mentioned that computer operators would be using their skills to a socially useful end for the first time. A particular example of the present destructive use of this technology is the Government Communications Headquarters (GCHQ) at Cheltenham.

It is now known that this benign title is a euphemism for an elaborate spy set up which employs about 9,000 workers in the headquarters and throughout the world wide network of listening posts, known as the Composite Signals Organisation. The work of these establishments is that of spying on other capitalist states, particularly state capitalist Russia and its dominions in the eastern bloc. It has its counterpart in America, which is the National Security Agency, and doubtless its even more secret equivalent in Russia.

This international espionage involves the most sophisticated communications technology. At GCHQ they have in use the CRAY I, the world’s most powerful computer, capable of making 150 million calculations per second and of storing 30 billion words. The principal function of the CRAY I has been to decrypt soviet and other information, transmitted in code. As well as the world distribution of listening posts, information is also gathered via satellite surveillance. Space technology is vitally involved for both photography and for listening in to telephone and wireless communications. Apart from the CRAY I, other computers are programmed to sift through the voluminous data which becomes available. Recently the Geoffrey Prime spy case, and the banning of trade unions at GCHQ. have focussed attention on its work.

In his article, ALB illustrated how the technology involved could be adapted for the organisation of production for need, but he quite rightly dismissed the idea that world production in socialism would be controlled by a single huge computer. He stressed the practical need for different scales of productive organisation on local, regional and world levels. He suggested a hierarchy of computer networks, or to put it differently, a decentralised information system, corresponding to the different scales of productive organisation which could monitor production in relation to needs and, for example, the availability and use of materials, etc. Can I suggest that this practical use of information technology for human needs would be vastly more simple and straightforward compared with the sinister complexities of its present use?

Moreover, such an information system in socialism would be completely open with free access to any part of it. This factor is vital to democracy, which cannot operate without freely available information. Although computers and communication systems are described as "information" technology, their use under capitalism is not to make information freely available. Both state and private enterprises and the state machine itself operate in secret, with dismissal or imprisonment for those who break the rules. By itself, the concealment of information condemns a society as being undemocratic and corrupt.

Yet when everything has been said, responsibility must come back to the workers on whose skills the running of these systems depends. Their skills could be adapted so easily for the running of a sane, democratic society concerned solely with needs. Adaptation would have to take place, yet with such establishments as GCHQ and the world Composite Signals Organisation the equipment and skills are already in place for the operation of a completely open world information system as part of the practical running of production for use. To repeat ALB's conclusion, "all that is lacking is the will to change society so as to be able to take full advantage of it"
Pieter Lawrence
Tatsfield,
Kent