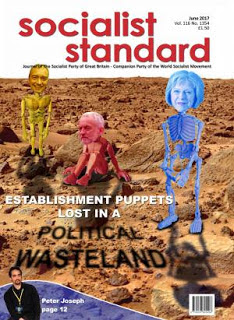 BBC Newspeak
‘When you have covered the story from every angle. When you have reported the facts whatever the obstacles. If you have asked the questions others won’t. When you have never taken sides in any war, revolution or election. When you have come under fire from people in power around the world and you have always championed the truth, then you can call yourself the most trusted brand in news.’  Sic and repeated ad nauseam currently on the BBC World News television channel. Such vomit-inducing chutzpah! How should socialists react to media lies, omissions, distortions and half-truths, as well as conspiracy theories and alternative facts? We should remember Marx’s favourite motto – doubt everything! – and this from his German Ideology (1845): ‘the class which has the means of material production at its disposal, has control at the same time over the means of mental production.’ The BBC has a long history of supporting the status quo: in the General Strike of 1926 it clearly sided against our class. This quote attributed to Orwell is also apposite: ‘during times of universal deceit, telling the truth becomes a revolutionary act.’


Down and Out in Manchester
Engels’ The Condition of the Working Class in England (1844) is a classic analysis of the appalling conditions of our class in Britain during his stay in Manchester and Salford. There have, undoubtedly, been some improvements since then: smallpox has been eradicated and deaths from diseases such as measles, scarlet fever and whooping cough are very rare. In The Housing Question (1887) he shows how and explains why reforms within capitalism always come up short. News therefore of a ‘homeless community found living in dark, squalid tunnels… under the streets of Manchester’ (thesun.co.uk, 2 May) should not come as a surprise. There are more than enough empty dwellings in Manchester and elsewhere to accommodate the homeless but because houses are produced for profit there is no possibility of a rational approach to housing within capitalism. Engels is clear: ‘as long as the capitalist mode of production continues to exist, it is folly to hope for an isolated solution of the housing question or of any other social question affecting the fate of the workers’.


Moribund May Days
When the Labour Movement was young, the first of May was set aside as a day on which the workers of different countries would suspend their labouring and join in mass meetings to send to each other fraternal greetings and expressions of solidarity in the struggle against capitalist oppression. Their value has, however, long since come into question. A contributor to the May 1936 edition of this Journal wrote: ‘for many years now these May Day demonstrations have been held, and the net result of them all is nil, as far as helping the workers out of their difficulties is concerned.’ Were that writer alive today, he would likely die of despair: ‘… marchers have taken to the streets in several cities across Sweden to call for Muslim women’s right to work while wearing the hijab . . . Protesters . . . chanted slogans such as crush racism, my hijab is not your business and employment is our right” (aljazeera.com, 1 May). Today, a large number of workers want a visual sign of their ignorance and submission as well as the right to bear the yoke of wage slavery.


Telling the Truth
‘Knowledge makes a man unfit to be a slave’, said Frederick Douglass. Socialists value free speech and abhor censorship in all its forms. Stephen Fry may be fined for saying ‘how dare you create a world in which there is such misery? It’s not our fault? It’s not right. It’s utterly, utterly evil. Why should I respect a capricious, mean-minded, stupid god who creates a world which is so full of injustice and pain’ (independent.ie, 6 May). Paying £11,000,000+ for a licence plate is legal yet ‘a Canadian Trekkie has had his Star Trek-themed license plate revoked after his insurance firm deemed it offensive. Nick Troller was driving round with his ASIMIL8 custom plate for almost two years before he was contacted by the Manitoba Public Insurance to say he would have to give it up. The phrase ASIMIL8 refers to the Borgs [sic] – the villains of Star Trek: The Next Generation – who want to assimilate all other alien races into their own’ (dailymail.co.uk, 30 April). Let us hasten that glorious day when a majority of us armed with the knowledge of socialism act. The capitalists will know that resistance is futile.