The Panjandrum: Science and Subversion (2017) 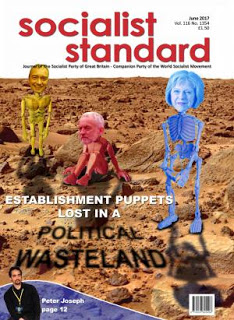 From the June 2017 issue of the Socialist Standard


‘The sacrosanct fetish of today is science. Why don’t you get some of your friends to go for that wooden-faced panjandrum – eh?’

The above quote is from Joseph Conrad’s novel The Secret Agent within which the employer of an ‘agent provocateur’ is attempting to persuade his employee to destroy an architectural symbol of science which he believed to be part of the iconography of bourgeois culture. Certainly during the nineteenth and early twentieth century this perspective is persuasive given the identification of science with the accelerating technological forces of production. There’s little evidence that the ruling class ever understood or took any interest in the intellectual rigours or origin of scientific analysis but many of them certainly believed it to be a symbol of the ‘progress’ that they thought of themselves as representing. Does science still possess this iconic status as a symbol of capitalism and the ideology of the class that bears its name? Or has the dialectical wheel turned to a point where science is now directly subversive of all that it once seemed to represent culturally and politically? Has science now turned against its own technological progeny and, in doing so, does it now represent an ideological challenge to the market/profit shibboleths of 21st  century capitalism?

Although some, including many within its own community, have made grandiose claims for science as the definitive form of knowledge (mathematics as the language of nature and/or god etc.) it is as well to remember that science is created and sustained by the labour of human beings (scientists). We may well see it as one of our greatest achievements but we must resist any attempt to dehumanise it and raise it to the level of some type of quasi-religion. As our creation, it is subject to all of the cultural and political influences that exist within all human endeavours. We can see this clearly within the arena of the law courts. ‘Expert witnesses’ will appear for both defence and prosecution and after confirming their exhaustive scientific credentials they will proceed to interpret the forensic evidence in often directly contradictory ways.

In the past we have seen such experts confidently assert that nicotine is not addictive and that tobacco can have positive effects on the health of those who smoke. Indeed some commentators have dated the end of the love affair between capitalism and science to December 1953 when the Tobacco Industry Research Committee (TIRC) was created in the US. This organisation was a pseudo-scientific front for the tobacco industry which employed those scientists who were ‘sceptical’ about the connection between smoking and serious heart and lung disease. It set a precedent for a way in which companies could deal with ‘unhelpful’ scientific data – they would not directly confront the evidence but would highlight and emphasise the inherent scepticism within the scientific method itself. We can ridicule such things in retrospect but remember that those who deny ‘global warming’ as a result of industrial activity (including some scientists) and those who desperately still look to science to demonise substances like marijuana are still playing the same game. It is not that they are necessarily consciously lying but rather that the cultural and political pressures to make the evidence fit the needs of the dominant ideology are sometimes irresistible.

Socialists are materialists and as such we attribute the success of science to its ability to represent, more or less accurately, the world in which we live. It can be seen as part of humanity’s ongoing project to understand itself and its world alongside philosophy, anthropology and history, etc. The results of scientific enquiry can be described as ‘correspondence truths’. As we have noted, these ‘truths’ seemed to consolidate the political validity of the capitalist class of the past; now they seem to have turned on their owners with a vengeance. Historically we have seen a similar phenomenon in religion as the Protestants of the Reformation turned on their former masters (the Catholic hierarchy) and used the same biblical scripture in the forefront of their struggle against Rome. As has happened with science today, the Christian faith was subverted by the specific political needs of the rising European nation states of that period. Some socialists called their more rigorous materialist approach ‘scientific socialism’ in an attempt to completely confiscate the beloved panjandrum of the bourgeoisie. Today we are more aware of the ideological component within the scientific method and so do not believe it to be the definitive description of the world that some once did.

Placing science and scientists within an historical and political context gives us a greater insight into its nature and how it has contributed to both conservative and revolutionary ideas. It is tempting to hope that science can still aspire to a value-free conception of nature (and the culture that created it) but this now seems increasingly naive. Is this a council of despair or, ironically, an example of the very same scientific approach that its conclusions seem to undermine? As we socialists are prone to say: only history will tell us. What we can say with confidence is that the political struggle will continue as long as poverty, privilege, exploitation and war thrive. That both sides will continue to utilise all of the intellectual weapons available to them is also inevitable. After the revolutionary resolution of this struggle it is unlikely that anyone will proclaim the victory as being that of ‘science’ or any other single component of human knowledge. What we can hope for from science is that no socialist revolutionary will die with any idealistic illusions, including those provided by its own panjandrum.