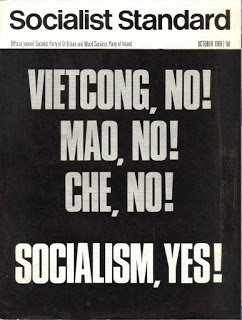 Re the Review of Boudin’s book Theoretical System of Karl Marx, (Socialist Standard, August 1968). Can we have some evidence in support of the statement that the “seizure of power in Russia in 1917 was allegedly with the object of imposing Socialism on a population not ready for it”? With Boudin, I can say “what I have read of Lenin’s says just the contrary”.

In the late Twenties a small volume appeared entitled On the Road to Insurrection. This consisted of a series of letters to his colleagues by Lenin from his temporary hiding place. In one of these he deals with the objections raised by Kamenieff and Zinovieff to his proposal to overthrow the Kerensky government. Among these was the point that, even if the insurrection succeeded it would not be possible to establish Socialism. Lenin’s retort was that it was not a question of establishing Socialism, but of gaining control of the industries in order to prevent the evasion of taxes by their proprietors.

In a critical review of the position in Russia a few years later the Socialist Standard wrote “They (the Bolsheviks) promised a war-weary people peace – and, wonder among politicians, kept their word!”

The slogan of the insurrection was “Peace, Bread and the Land!” If woolly headed people outside Russia jumped to the conclusion that Socialism had been established overnight, that is hardly Lenin’s fault. For the slogan, “Socialism in one country” we are indebted to Stalin, chief executioner of insurrectionists.
Eric Boden
Cromer, Norfolk

Reply:
It is quite correct that Lenin did not claim that the object of his Party was to introduce Socialism immediately, but then the article in our August issue (A Marxist Textbook) did not say that he did: the reference to “overnight” is our reader’s interpolation.

What Lenin wrote in April 1917 before his Party seized power, in The Tasks of the Proletariat in the Present Revolution was:

Our immediate task shall be not ‘the introduction of socialism’, but to bring social production and distribution of products at once under the control of the Soviets of Workers Deputies (Italics Lenin’s).

(It might be wondered what ‘Social production and distribution’ could mean if not Socialism, but Lenin attached some other meaning to it.) Lenin’s case was that the introduction of Socialism was not to be immediate, but he and others made it quite clear that the seizure of power was to result in Socialism. The question how this was to happen was dealt with by Maxim Litvinoff in his The Bolshevik Revolution written in March 1918. He wrote: –

In the meantime it is certain that if left by foreign enemies alone, the Soviet rule will in no distant future establish a Socialist regime in Russia.

On the following page he indicated that it would be “soon”. What is this but the concept of “Socialism in one country”? Litvinoff was not some uninformed looker-on. He was used by the Party as its spokesman abroad and was appointed by Lenin’s government as its official representative in Britain.

There were many other evidences of Lenin’s association of the seizure of power with Socialism. One was the Russian Constitution drafted by the Communists and adopted in 1918. It bore the title “Constitution of the Russian Socialist Federal Soviet Republic”. Another was Lenin’s own description of the seizure of power as “the Socialist Revolution” (Left-wing Communism by Lenin, May 1920, CPGB p. 44).

Of course we agree that the Communists gained support on the slogan “Peace, Bread and the Land”, not on seeking a mandate for Socialism. They knew that they could not get a Mandate for Socialism, but Lenin scoffed at the idea of waiting for Socialism until “the intellectual development of all the people permits it”.

The Soviet political party – this is the vanguard of the working class; it must not allow itself to be halted by the lack of education of the mass average, but it must lead the masses, using the Soviets as organs of revolutionary initiative . . . (Ten Days that Shook the World, John Reed, Penguin edition).

This was the accepted line of his party and Lenin’s government was not deterred by the fact that it could not even get a mandate for its immediate policy – hence the dictatorship. After the seizure of power a Constituent Assembly was elected which produced a majority of deputies opposed to the government, whereupon the government in January 1918 suppressed it. It was after that suppression that Litvinoff was holding out hopes of a “Socialist Regime in Russia” in no distant future.
Editorial Committee
Posted by Imposs1904 at 6:31 PM

Email ThisBlogThis!Share to TwitterShare to FacebookShare to Pinterest
Labels: Criticism of the SPGB, Eric Boden, Lenin, Letters to the Editor, October 1968, R1968, Russian Revolution, The Bolsheviks

Eagle-eyed readers of the blog will recognise the name of Eric Boden.

Boden was a member of the SPGB from 1912 until his resignation in 1952. He was an incredibly active writer and speaker of the SPGB all through the 10s,20s and 30s and was active not only in London but also in Yorkshire and East Africa.

PS - This letter was copied from the SPGB website.